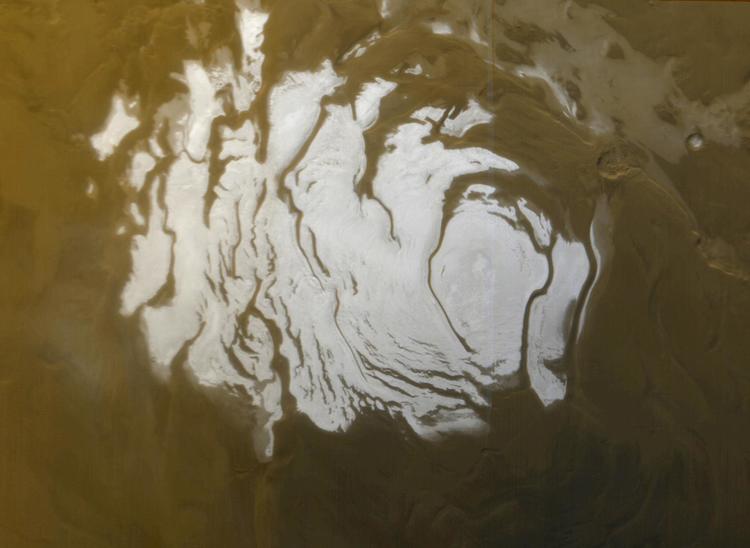 Toowoomba (The Conversation) – We now know that there is permanent liquid water on Mars, according to a paper published today in the journal Science.

This new finding comes from research using the Mars Express spacecraft that has been orbiting the red planet since December 25, 2003.

One of the suite of instruments carried by Mars Express is MARSIS (the Mars Advanced Radar for Subsurface and Ionosphere Sounding), which allows researchers to use radar to study features beneath the planet’s surface.

Using observations spanning a period of four years, a team of researchers from Italy found evidence of a large lake of salty water, buried 1.5 kilometres beneath Mars’ southern polar cap. That lake is at least 20 kilometres across, and seems to be a permanent feature.

The reason people are excited about this discovery is because on Earth, everywhere you find liquid water, you find life. NASA has long espoused a philosophy of “follow the water” in its program of astrobiological research – trying to answer the question “are we alone?”

Over the past two decades, we have seen mission after mission travel to Mars. Some, like Mars Express, are orbiters, whereas others (such as the incredible Spirit and Opportunity) are rovers. A unifying theme across those missions has been their attempts to see whether Mars once had the right conditions for life to exist and thrive.

Through them we have found abundant evidence that Mars was once warm and wet. We also have evidence that liquid water can still be found on the surface of Mars, from time to time.

But until today, the evidence of modern water all pointed towards fleeting moments – droplets condensing on the Mars Phoenix lander; or evidence of brief outflows of salty water in Martian valleys.

Compared with today’s discovery, those earlier findings are a drop in the ocean.

Mars has a lake

The latest observations reveal something remarkable: a salty lake buried deep beneath the ice, which seems to be a permanent feature rather than a transient phenomenon.

The comparison that springs to mind are the myriad lakes buried under the ice of Antarctica. So far more than 400 such lakes have been found beneath the surface of the frozen continent.

Perhaps the most famous is Lake Vostok – one of the world’s largest lakes, buried and hidden away. But the one to which I want to draw your attention is named Lake Whillans.

Lake Whillans is buried some 800 metres below the ice in West Antarctica. In 2013, a team of researchers succeeded in drilling down into the lake and recovering samples. What did they find? That it was teeming with microbial life.

In other words, the best Earth-based analogues for the newly discovered Martian lake are not just habitable, they are inhabited. Where there’s water, there’s life.

Is there life on Mars?

Finding this new lake, buried beneath Mars’ south pole, is another exciting step on our journey of discovery of the red planet. Could there be life there, beneath the ice?

The short answer is that we still don’t know. But it seems like the ideal place to look. What we do know is:

So what do you get if you put all that together? Well, this is where things get speculative.

But let’s imagine that in the far distant past, Mars had life. Perhaps the life originated there, or maybe it was delivered from Earth, hitching a ride on a meteorite.

Once life is established, it is amazingly hard to get rid of. Over millions of years, Mars cooled and its water became locked in permafrost. Its atmosphere thinned and it became the red planet we see today.

But maybe, just maybe, that life would have been able to follow the water – to move underground, where it might have found a niche, in a dark salty lake, buried beneath the ice of Mars’ southern polar cap.

That’s all well and good, but what next?

That’s all speculation, but it shows the kind of thought processes that have driven our ongoing exploration of Mars for the past couple of decades.

Now that we know for sure that there is a reservoir of liquid water just beneath the planet’s surface, astronomers around the globe will be thinking of ways to get down to that water to see what’s there.

That is easier said than done. Landing on Mars is challenging at the best of times, and the great majority of missions to date have landed within about 30° latitude of Mars’ equator. The two exceptions are the Viking 2 and Phoenix landers, both of which landed in Mars’ northern lowlands.

In addition, landing on Mars’ southern hemisphere is harder still. The north is the lowlands and the atmosphere there is markedly thicker, and the surface smoother (as befits, potentially, the floor of an ancient ocean).

To the south, you have less atmosphere to slow your descent and a rougher surface to make your landing harder.

But, while tricky, it is not impossible. And now we have a huge motivation to try.

It would not surprise me if, within a decade, we see missions being designed to visit Mars’ south pole and drill down to this great lake, to see what lurks within.

Jonti Horner is an astronomer and astrobiologist who currently works in the Computational Engineering and Science Research Centre at the University of Southern Queensland, in Toowoomba, Australia.