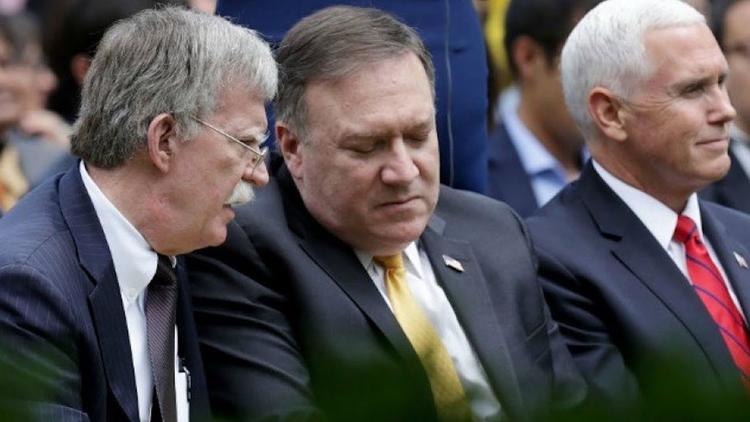 Secretary of State Mike Pompeo’s rant against Iran on Sunday accused the leadership of that country of hoarding the country’s wealth, behaving like a mafia, and being hypocritical clergymen. While these allegations are not without basis in fact, Pompeo’s own record undermines the critique.

The Trump administration is itself a government of billionaires, by billionaires and for billionaires. The tax cut they passed last February will over time transfer trillions of dollars to the super wealthy in the US, and will cut services and health care for most people. The average wage of the average worker in the US has been stagnant since 1970. But the top 1% has seen its wealth and income soar (that is roughly 3.2 million people). They are taking home 22% of the national paycheck each year now, but they are 1% of the population. The billionaire cabinet of trump has turned the Environmental Protection Agency into a vehicle for aiding corporations to pollute the earth and poison our air and water and inflict on us global heating. The Republicans have even repealed whatever few improvements to financial regulation that were passed after the 2008 crash, setting us up for another crash. The really wealthy seem to like occasional such crises, since they are too big to fail and can use them to transfer more wealth to themselves, kicking people out of their homes and stealing their equity.

Iran’s mullahs are corrupt, but the Trump administration isn’t perhaps the one with the standing to criticize them.

Pompeo complained about Iran’s “aggression.” Iran hasn’t militarily invaded another country for a very long time. The United States, in contrast, overthrew the elected Iranian government in 1953 and aggressively invaded Iraq in 2003 with no casus belli, occupied it for 8.5 years, and left it a smoldering mess to this day. The US goes around overthrowing democratically elected governments the way Switzerland makes watches and chocolates. Moreover, not only has the US been active in invading other countries, but its chief client in the region, Israel, invaded or mounted bombing campaigns against others in 1956, 1967, 1982, 2006, 2009, and 2014. Pompeo is all right with those acts of aggression.

Despite what people like Pompeo say, Iran is not actually much involved in Yemen, and certainly not as an invader or a driver of events. In contrast, the UAE and Saudi Arabia really have invaded Yemen, with US backing. Iran was invited into Syria by the government. It was invited into Iraq by the government (the same government that invited 6,000 US troops into the country, so you can’t easily condemn the one and not the other).

Then there was that crack about hypocritical clergymen. Pompeo is a paid up member of the Christian Taliban, the tribe in the US that most steadfastly supports Donald Trump. They used to say that the moral conduct of the president is crucial back when Obama was in. But now all of a sudden, only 1/3 say that. It is almost as if it matters most to them not whether the president leads a moral life but whether he is white and anti-abortion. I mean, you can’t be more hypocritical than to be a committed Christian and to support Trump to a hilt.

Or how about hypocritically saying that Trump supports Iranian families when he is tearing them apart with his Muslim visa ban?

Then there is the hypocrisy of actively supporting the crushing of the occupied Palestinian people by Israel’s Likud Party, when helping the weak and oppressed was kind of important to Jesus of Nazareth.

And there is the hypocrisy of allying strongly with Wahhabi Saudi Arabia, which does not allow Christians even to practice their religion publicly, and which is an absolute monarchy with no elections higher than the municipal level. Saudi Arabia moreover supported the extremist group in Syria, the “Army of Islam,” which dreamed of ethnically cleansing Syria’s Allawite Shiite minority.

Iran’s elections are deeply flawed because the candidates are vetted for ideological purity by regime hard liners. But once the vetting is done, the elections are mostly fairly aboveboard (2009 was an exception), and there are surprises. Iran has an elected parliament with Jewish and Christian representatives. There is nothing like that in authoritarian Saudi Arabia, where the king’s word is law.

Trump and Pompeo and the like keep talking about Iran committing terrorism. But they mean by that things like Iranian support for Hizbullah in Syria, which was the force that actually defeated al-Qaeda and some ISIL forces. Hizbullah was born from southern, Shiite Lebanese resistance against the Israeli occupation of 10% of Lebanon, in which the US had de facto acquiesced, and if it hadn’t been for that resistance, Israel would still be in south Lebanon. Taking on that occupation is mostly what Trump and the Likud mean by terrorism. But look back to the period before the Israel invasion of Lebanon in 1982, and there had been no militancy among Lebanese Shiites (who are, by the way, only about 1.3 million people and not exactly ten feet tall; Israel’s population is 8 million and they have been given the best military equipment in the Middle East by the US). People like Trump and Pompeo depend on Americans not being well-informed enough to distinguish between Sunni extremists and the Shiite Iranians.