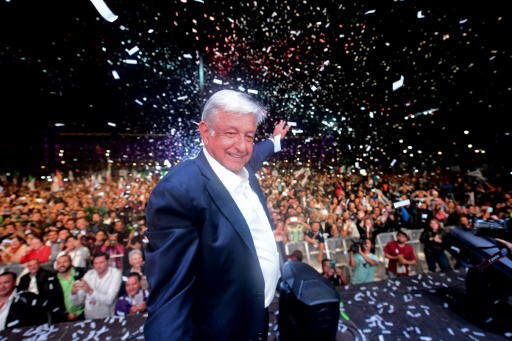 When I was writing an article about street vendors in Mexico City, I saw firsthand how the country’s ruling party operated. Vendors eke out a living selling trinkets and food on street corners. A group in one part of Mexico City had held a series of militant demonstrations opposing a violent police crackdown aimed at driving them out of that neighborhood.

The ruling Institutional Revolutionary Party (PRI) gave a few of the movement’s leaders government jobs, had them call off the demonstrations, and then quietly displaced the vendors as originally planned. Since 1929 the PRI has honed the art of repression and cooptation. The PRI, along with the right-wing National Action Party (PAN), had hoped to use those tactics during Mexico’s July 1 presidential elections. It didn’t work.

On Sunday democratic socialist Andrés Manuel López Obrador received a stunning 53 percent of the presidential vote, compared to 22 percent for PAN’s Ricardo Anaya and 15 percent for PRI’s Jose Antonio Meade. A leftist coalition, led by Lopez Obrador’s National Regeneration Movement (MORENA), won a blowout 300 of 500 seats in the House of Deputies and between 56-70 in the 128-seat Senate.

Lopez Obrador, known by his initials AMLO, presented a progressive alternative to the corrupt leadership of the past. He drew support from blue collar workers, peasant farmers, small business people, a sector of the intelligentsia and some big business people alienated from the major political parties.

AMLO called for free education, pensions for seniors and improving the country’s petroleum infrastructure. He also called for a massive tree planting project that he said would create 400,000 jobs.

“AMLO focused on a few key programs aimed at increasing Mexican economic independence from the US and generating jobs,” Bruce Hobson told me. Hobson is an American political activist and analyst who has lived for decades Guanajuato, Mexico.

Student Eugenia Gonzalez, said “In truth, I don’t think any of them are worth much, but it’s better (to pick Lopez Obrador), who is a useful vote against the PRI.”

To Have and Have Not

AMLO’s election represents a victory of the have nots over the haves. A wealthy elite in Mexico enjoy extravagant lifestyles in homes surrounded by high walls. Yet, of the country’s 127.5 million people, a staggering 46 percent live below the poverty line. l

Drug cartels control swaths of major cities with the cooperation of government officials. The last two presidents, PAN’s Felipe Calderon and PRI’s Enrique Peña Nieto, promised to end the narco violence, only to see it increase. Since 2006, over 200,000 people were killed in the drug wars and some 30,000 disappeared.

The most infamous case remains officially unsolved, the 2014 disappearance and murder of 43 student teachers from Ayotzinapa in the state of Guerrero. An international human rights report implicated federal officials in the disappearances and subsequent cover up.

Move to the center

During the campaign AMLO downplayed his socialist politics and moved towards the center in an effort to pick up alienated PAN and PRI voters. He promised to appoint wealthy capitalist Alfonso Romo as his chief of staff and Harvard-educated economist Graciela Márquez as his economy minister.

AMLO also formed an electoral alliance with the far right, evangelical Social Encounter Party (PES), which on first view, seems an odd alliance. PES opposes abortion, gay marriage and homosexuality. But AMLO comes from a Catholic background and didn’t campaign on women’s rights issues. The coalition with PES may have given AMLO a few extra percentage points in the presidential race and in the legislative elections.

In 1993 I appeared on a Mexico City radio station to discuss NAFTA, the North American Free Trade Agreement. A pro-NAFTA businessman assured the audience that jobs would increase and the economy would improve overall. In reality, inflation shot up, and since implementation of NAFTA in 1994, poverty grew exponentially.

Farmers were driven off the land because of cheaper imports from the United States. Some U.S. and Canadian companies opened factories along the border, but the new jobs never replaced those lost to cheap U.S. imports.

Nevertheless, the new Lopez Obrador administration will face a belligerent Trump, the continent’s 800 pound gorilla. “AMLO has clearly expressed that he wants better economic and political relations with the United States based on equal partnership and respect,” said Hobson. “This isn’t necessarily a bad thing.”

Trump and AMLO can agree on some NAFTA changes, albeit for different reasons. Trump wants to raise hourly wages for auto workers in Mexico to $16/hour in order to encourage U.S. companies to keep more jobs at home. AMLO supports wage increase for Mexican auto workers.

However, NAFTA negotiations and Trump’s absurd demand that Mexico pay for a border wall will remain major areas of conflict.

Javier Bravo, a history professor and MORENA activist, told me it won’t be easy.

“Corruption is very deeply rooted in our political system,” he said. “AMLO doesn’t have a magic wand to change everything at once. It will be a long process.”

Hobson said the rank and file will have to keep up the pressure for democratic and socialist policies within MORENA. Lopez Obrador exhibits some of the traits of a Latin American caudillo, or all powerful leader, he said.

Leftists within MORENA want the party “to undergo a cultural change so that leadership should be more collective,” he said.

Hobson wants MORENA involved not just in electoral politics but to become rooted in the movements of indigenous people, women, gay/lesbian/trans, labor, counter-culture youth, and environmentalists.

Imagine for a moment if Bernie Sanders had won the 2016 presidential election. That would have been a tremendous step forward for the country, but only a first step towards fundamental change.

That’s the admirable position now faced by the left in Mexico.