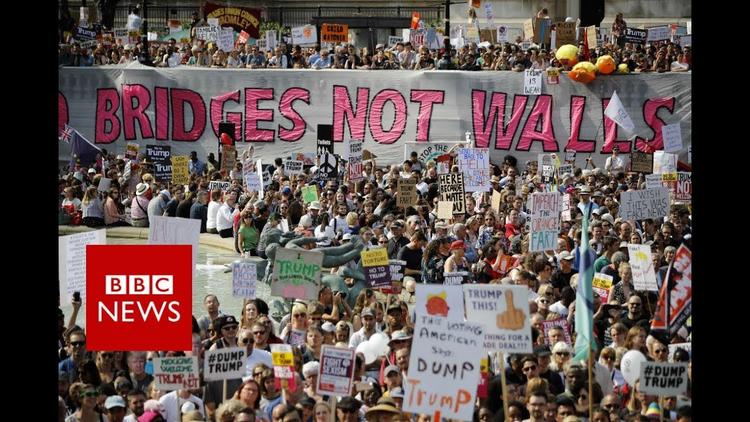 Hundreds of thousands of Britons took to the streets to protest Trump’s visit on Friday, as he was ridiculed with a baby Trump blimp. The vast majority of Britons deeply dislike the American president, our homegrown weird hybrid of Mussolini and the scheming trickster Newman from Seinfeld.

Trump’s visit was marked by a peculiarly vicious attack on his host, Theresa May, in an interview in The Sun tabloid, which appeared quite awkwardly on the morning he was set to have talks with . . . Theresa May. This is something I had predicted earlier this week.

In the interview, Trump virtually commanded Britain to take the “hard Brexit” path of avoiding a common market with Europe that would keep the British economy closely tied to the EU. Such a path, which May has opted for, would place restrictions on British trade with blocs outside the EU or at least would interfere with tariff sweetheart deals.

Trump wants the British economy to be solely at the mercy of US business tycoons.

Trump also attacked British immigration policy, warned Dr. Strangelove-style about the pollution of the West’s precious bodily fluids by pesky non-Christian non-white immigrants (as though Trump were a Christian and as though his grandfather hadn’t been an immigrant with seedy businesses).

And, Trump suggested that Boris Johnson, the bigoted and erratic proponent of hard Brexit who had *just* resigned from May’s cabinet over her plans to go soft with the EU, would make a good prime minister.

Then when Trump did his news conference with May, he denied it all as fake news, leaving the ordinarily professional and hardhitting British press corps flabbergasted and almost speechless (I was watching British television yesterday and they clearly could not figure out how to cover the combination of brutish brutality and bald-faced dishonesty).

What was going on here? Well of course it is possible, as some European and NATO diplomats have said they have concluded, that Trump is just loony as the day is long and that all sorts of unfiltered things come out of his mouth all the time, each contradicting the ones before.

But it is also possible that Trump’s antics have an element of deliberateness about them (without my wanting in any way to question the conclusion about his fragile hold on reality).

His British visit could be explained if he thinks he is an organized crime boss from old Francis Ford Coppola movies.

Organized crime operates in the shadows and outside of law, and is run by specialists in violence and intimidation. It is characterized by an honor system (organized crime in Sicily appealed to the old tribal virtue of omerta or manliness).

If a person plays in that system, they will want to intimidate and commit violence toward rivals, but they will also want to leave open the possibility of alliances with those rivals against other forces (law enforcement or third party rival gangs).

So the mob boss captures the lieutenant of the rival boss, and tortures him to death as a warning not to cooperate with the boss’s enemies or not to try to make inroads in the boss’s turf (selling drugs or running gambling rings in his territory).

But when the two mob bosses meet for a fine steak in a fancy restaurant to discuss future cooperation, they have to pretend that one’s lieutenant wasn’t gruesomely tortured by the other and they have to maintain their mutual honor in public.

Trump let May have it. Her soft Brexit, her plans for a deal with Europe that would keep the British economy from being severely punished by European tariffs, are unacceptable to Trump and his circle. Their mouths had been watering at the thought of being able to go into Britain without all those pesky EU regulations and to wring profits out of its economy by firing workers (“downsizing”), or by razing environmental regulations so as to profit from poisoning the earth, or by buying up thriving firms and selling off their parts at a profit, destroying them but making a huge killing. If May does soft Brexit, the EU regulations interfering with Barracuda Capitalism will still be in place and Trump and his buddies won’t be able to prey on the UK in the same way.

So in the interview, he let May have it, and went over her head to appeal to the British far right, which May had unwisely attempted to accommodate in her Tory party.

Having bloodied her quite publicly, having threatened her and slapped her around, Trump then met with her in public and put the illusion of honor back in place. The special relationship is the most special. Theresa May is the best thing since sliced (white) bread. The interview was “fake news.”

Because in the world of organized crime, as in literary deconstruction, you have to hold opposites in tension with one another to produce meaning.

Mind you, Theresa May is a horrible person who has no respect for the rule of law or for people’s privacy and who is tempted by some of the worst tropes of the British Right, and so it is hard to feel any sympathy for her as she is mauled by Trump as though she were trapped sitting next to him on a plane.

She has a choice, now, of standing up for herself or of being maneuvered by Trump into being his gun moll.