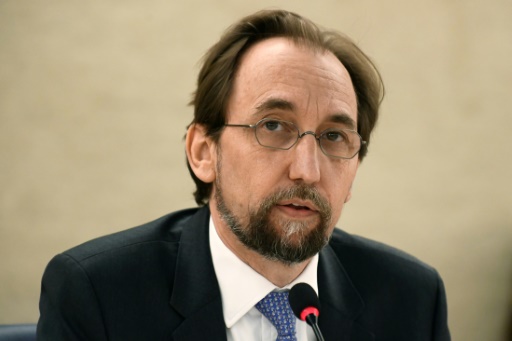 United Nations (United States) (AFP) – The United Nations rights chief on Monday demanded that Israel either give more than 400 detained Palestinian children their day in court or release them, decrying “assaults” on Palestinians’ rights.

“Israel should immediately charge, or release, all of them,” the Geneva-based Zeid said via videolink, calling Israel’s system a “fundamental human rights violation.”

“It should be absolutely clear that international law requires detention only be used for children as a last resort,” he said.

“And whether for children or for adults, detention without trial, on evidence that is often kept secret, under often indefinitely renewable administrative detention orders, contravenes Israel’s obligations under international law, and must come to an end.”

The meeting focused on recent violence in the Gaza Strip, which is to the UN Security Council is set to take up Tuesday during a regular monthly session on the Middle East.

The Gaza Strip, controlled by Islamist movement Hamas, has been under an Israeli blockade for more than 10 years.

But since late March, that blockade has sparked a vast protest movement along the border with Israel that has left at least 149 Palestinians and one Israeli soldier dead.