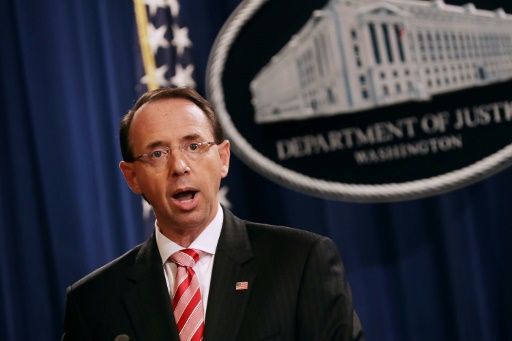 The charges were drawn up by Special Counsel Robert Mueller, the former FBI director who is looking into Russian interference in the November 2016 vote and whether any members of Trump’s campaign colluded with Moscow.

The 29-page indictment accuses members of the Russian military intelligence agency known as the GRU of carrying out “large-scale cyber operations” to steal and release Democratic Party documents and emails.

“There’s no allegation that the conspiracy changed the vote count or affected any election result,” Deputy Attorney General Rod Rosenstein said in announcing the charges at a press conference in Washington.

“There’s no allegation in this indictment that any American citizen committed a crime,” Rosenstein added, although the “conspirators corresponded with several Americans during the course of the conspiracy through the internet.”

However, “there’s no allegation in this indictment that the Americans knew they were corresponding with Russian intelligence officers,” he said.

Rosenstein said he briefed Trump about the indictment before Friday’s announcement and that the timing was determined by “the facts, the evidence, and the law.”

The deputy attorney general’s press conference came as Trump was meeting Queen Elizabeth II and just three days before his meeting with Putin in Helsinki. 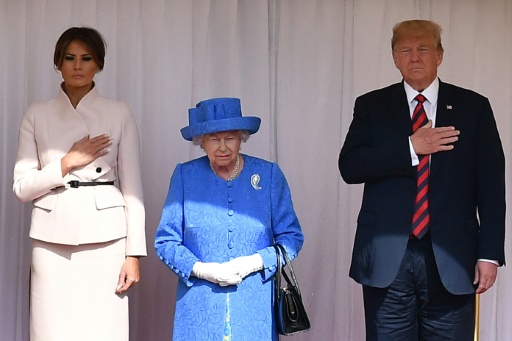 “These indictments are further proof of what everyone but the president seems to understand: President Putin is an adversary who interfered in our elections to help President Trump win,” Schumer said in a statement.

“President Trump should cancel his meeting with Vladimir Putin until Russia takes demonstrable and transparent steps to prove that they won’t interfere in future elections,” he said.

Democratic Senator Ron Wyden also urged Trump to cancel the summit saying “in light of what’s been revealed about Russia’s attack on our democracy, the president shaking Putin’s hand would be a moment of historic cowardice.”

Republican Senator Ben Sasse stopped short of calling on Trump to cancel the meeting but said “All patriotic Americans should understand that Putin is not America’s friend, and he is not the president’s buddy.”

Speaking earlier Friday, before the indictments were announced, Trump said he would ask Putin about the allegations of Russian election meddling.

“I will absolutely, firmly ask the question, and hopefully we’ll have a good relationship with Russia,” he told a joint press conference with British Prime Minister Theresa May.

But he simultaneously denounced the Mueller investigation as a “rigged witch hunt,” and said he has been “tougher on Russia than anybody.”

“We have been extremely tough on Russia,” Trump said.

The US president recalled that 60 intelligence officers were expelled from the Russian embassy in Washington in response to a nerve agent attack on a former Russian spy in Britain.

Russia has denied any involvement in the attack and rejected accusations that it interfered in the US presidential election in a bid to bring about the defeat of Democrat Hillary Clinton.

– No ‘knowing involvement’ by Trump campaign –

In a statement, the White House highlighted Rosenstein’s remarks that no Americans had been charged in the indictment.

“Today’s charges include no allegations of knowing involvement by anyone on the campaign and no allegations that the alleged hacking affected the election result,” it said. “This is consistent with what we have been saying all along.”

The indictment alleges that beginning in March 2016 the GRU agents began targeting over 300 employees and volunteers of the Clinton presidential campaign, the Democratic Congressional Campaign Committee (DCCC) and the Democratic National Committee (DNC).

“The conspirators covertly monitored the computers of dozens of DCCC and DNC employees, implanted hundreds of files containing malicious computer code, and stole emails and other documents,” it said.

Around June 2016, they began releasing tens of thousands of the stolen emails and documents using “fictitious online personas, including ‘DCLeaks’ and ‘Guccifer 2.0,'” the indictment said.

Some of the documents and emails were released through a website identified in the indictment only as “Organization 1” which is believed to be Julian Assange’s WikiLeaks.

Other documents and emails were made public through a website and Twitter account known as DCLeaks which the GRU falsely attributed to a group of “American hacktivists.”

Former Trump campaign chairman Paul Manafort has been indicted for money laundering and other crimes while former national security adviser Mike Flynn has been charged with lying to the FBI.