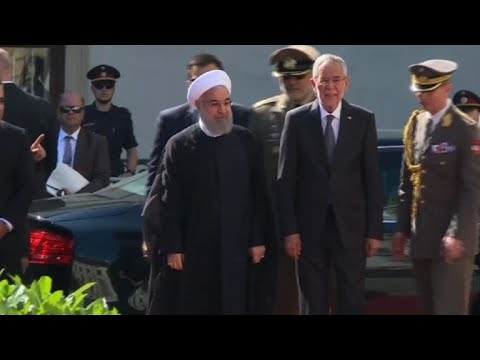 The five foreign ministers, minus US Secretary of State Mike Pompeo, of the countries signatory to the 2015 Iran deal on curbing its civilian nuclear enrichment program, will meet in Vienna on Friday to explore ways of preserving the Joint Comprehensive Plan of Action after the treaty was violated by the Trump administration.

The JCPOA was signed by Britain, France, Russia, and China on the UN Security Council plus Germany as an informal representative of the European Union.

Trump is attempting to sabotage the deal, which placed severe restrictions on Iran’s enrichment activities in return for an end of UNSC sanctions. The deal implied that US sanctions would be lifted or lightened, as well, but that never happened because of the hostility of the Republican Congress to the deal.

I’m of a generation where the idea of the UN Security Council meeting without the US is hard to imagine. The conference is eloquent about how isolated and increasingly irrelevant Trump has made America. The rest of the world now sees Washington as an annoying problem to get around.

Moreover, think of it. This meeting involves three of America’s closest military and economic allies–Britain, France and Germany– having been pushed by Trump into the same corner with Russia and China in seeking to have better relations with Iran. I guess Trump has taught *them* a lesson.

Smaller European firms that do not do business with the US and who can use Euros or some other currency and go through non-US banks could conceivably go on doing business with Iran with no exposure to the wrath of the enormously powerful Treasury Office of Foreign Asset Control. China’s gas giant Sinopec has said it will defy US sanctions, as has the Turkish foreign ministry, and Russian officials and concerns also reject Trump’s bullying. While the Indian government has warned the country’s corporations to be ready for anything, New Delhi will make a stand for economic independence of the US and plans to buy Iranian oil with rupees. The US Treasury Department only has authority over dollar exchanges, and over banks that have branches in the US or do business with the US.

Iran gave up perhaps 90% of its enrichment activities, keeping only a small number of centrifuges and enriching uranium only to the 3.5% needed to run its 3 Russian-built nuclear power plants at Bushehr. Tehran has therefore demanded economic guarantees from the remaining signatories.

Although Emmanuel Macron in France has said his government is committed to finding ways to protect French trade with and investment in Iran from Trump, few dispassionate observers think he is likely to succeed in that quest, with regard to the larger French firms. At most, small business might be sheltered.

Iranian president Rouhani has made a lot of blustery threats about what will happen if Europe reneges on the JCPOA, including that Iran could start back up its more ambitious enrichment program, and, more recently, could interfere with oil and gas exports from the Gulf (from which 22% of world petroleum originates). Iran is saying that if it cannot export its oil from the Gulf, then it can’t see why its enemies like Saudi Arabia and the United Arab Emirates should be allowed to.

It is hard to imagine such a scenario. Even during the Iran-Iraq War of 1980-88, relatively little oil sabotage took place, because each side was afraid of lasting damage to its own industry. But that Iran could resume its enrichment program is entirely plausible. And that Iran could turn spoiler is also plausible, though in less overt ways.