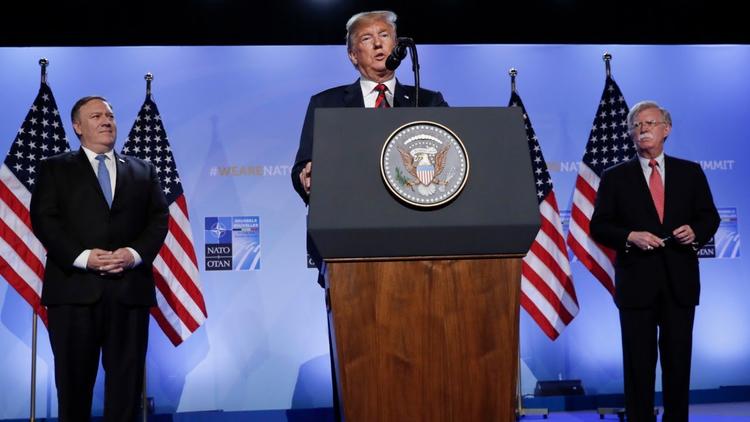 Both Trump and his hyperactive but ineffectual secretary of state, Mike Pompeo, ratcheted up their rhetoric on Iran on Thursday. In fact, Pompeo has been more or less threatening acts of war for the past week.

“I would say there might be an escalation between us and the Iranians.”

Yes, and George W. Bush offered not to invade Iraq if only Saddam Hussein would leave it and open himself to being arrested by Interpol.

Threatening other countries and acting belligerent and imposing an economic blockade on them might sometimes bring them to the table if they think they can get a better deal that way. But what Trump and Pompeo want from Iran just will never be acceptable to Tehran. They want the ayatollahs unilaterally to surrender to Saudi Arabia and the United Arab Emirates and let the latter two have Iraq, Syria and Lebanon, and cease supporting the Palestinians.

The reason Barack Obama and John Kerry conducted a successful negotiation with Iran was because they focused in on a single issue– Iran’s nuclear enrichment program. And they put the kind of limits on that program that Iran could minimally live with. Had they thrown in Lebanon and Iraq and rockets and kowtowing to the House of Saud, they’d have never so much have been able to conduct a telephone call, much less achieve a wide-ranging treaty.

But if you throw around a lot of threats about “escalation” and “pain” and present the other country with nothing but an ultimatum, that can lead to serious trouble. In fact, it is a truism of military and diplomatic history that ultimatums always lead to war.

The other thing to say is that just last week, the members of the UN Security Council minus the US met with Iran to see what could be done about preserving the Iran deal. They just went around Trump, including Britain and France (Germany sat in as informal representative of the EU). When you don’t have your major allies with you, squeezing an oil state like Iran is pretty hard to pull off.

Pompeo just visited the United Arab Emirates, which seems to have played a role in getting Trump elected and in connecting his team with Russian firms close to Putin. The UAE, as much as Israel and Saudi Arabia, led the charge to have the 2015 Iran nuclear deal destroyed by Trump. When Mueller’s findings come out, why exactly Trump and Pompeo are in the back pocket of Emire Mohammed Bin Zayed may be clearer. For the moment, we should be afraid, very afraid.

While in the UAE, Pompeo did an interview with The National, Abu Dhabi’s house propaganda organ (which has started to make the old Soviet Pravda look like a paragon of sane and independent journalism).

Pompeo said of Qasem Sulaimani, the head of the special operations unit, the Quds or Jerusalem Brigade, of the Iranian Revolutionary Guards Corps, “Qassem Soleimani is causing trouble throughout Iraq and Syria and we need to raise the cost for him – for his organisation and for him personally.”

Sulaimani has been targeted by Saddam Hussein, Saudi intelligence, and a host of other foes, and he is still standing, so Pompeo’s incredible arrogance is unwarranted. Moreover, if Iraq’s government had to choose between Pompeo and Sulaimani, they would go with the latter hands down (the militias Sulaimani helped organize to fight ISIL are actually now in parliament and helping form the government!). I mean, contemporary Iraq was deeply shaped by American invasion, occupation, rule and intervention, and if even there Pompeo is at a disadvantage, imagine the situation in Syria or Lebanon.

In the Cold War, it was considered unwise to threaten individual Soviet generals, because that sort of thing can spiral out of control. The only time I’m aware it was considered was when Reagan’s out-of-control CIA was running the Afghan Jihadis in Afghanistan in the 1980s. That bright idea led directly to the al-Qaeda attacks on the US on September 11, 2001. The holy warriors figured if one superpower could be attacked with impunity, so could the other.

So Pompeo, himself of the tribe of Christian Taliban, is asking for an awful lot of blowback with this sort of talk, in which he is no doubt encouraged by Mohammed Bin Zayed and by Mohammed Bin Salman of Saudi Arabia, as well as the corrupt and arrogant Binyamin Netanyahu of Israel. They’ll fight Iran to the last American life.

Trump and the people around him could not organize their way out of a paper bag if it didn’t involve kickbacks or money laundering. Sulaimani, despite the authoritarian character of the regime he serves, is the grand chess master of Middle East politics. My guess is that the Jerusalem Brigade will be tinkering with the Iraqi and Lebanese parliaments long after Pompeo is back in the private sector eating overcooked steak in Kansas and seeing if he could eke out 12 miles a gallon in his dusty Escalade.