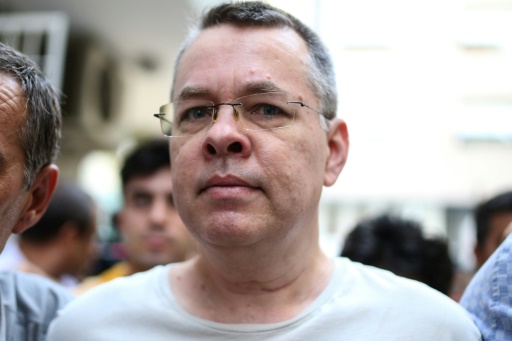 Ankara (AFP) – President Recep Tayyip Erdogan warned the US in comments published Sunday that sanctions would not force Ankara to “step back” after Donald Trump threatened to punish Turkey if a US pastor was not freed.

“You cannot make Turkey take a step back with sanctions,” Erdogan said in his first comments since relations soured after Trump threatened the measures on Thursday if Pastor Andrew Brunson was not released.

“The US should not forget that it could lose a strong and sincere partner like Turkey if it does not change its attitude,” he was quoted as saying by Hurriyet daily.

“The change of attitude is Trump’s problem, not mine,” he told journalists during a visit to South Africa, calling the US threats “psychological warfare”.

Relations between the NATO allies have worsened over the jailing of Brunson, who ran a Protestant church in the Aegean city of Izmir.

He was held in a Turkish jail for almost two years on terror charges but was placed under house arrest on Wednesday.

Trump on Thursday hit back at the move, calling for his immediate release and warning that the US would impose “large sanctions on Turkey for their long time detainment” of Brunson.

Ties had already been strained over multiple issues including Washington’s support of a Syrian Kurdish militia which Turkey views as a terrorist group and the failure to extradite the Pennsylvania-based Muslim preacher Fethullah Gulen.

Erdogan in September suggested Turkey could free Brunson if the US handed over Gulen — an offer brushed off by Washington.

Ankara accuses Gulen of ordering the 2016 failed overthrow of Erdogan, a claim he strongly denies.

The Washington Post on Friday reported a deal between Ankara and Washington was made to secure the release of a Turkish woman imprisoned in Israel in exchange for the freedom of Brunson.

Ebru Ozkan, 27, had been held for over a month by Israel on charges of passing hundreds of dollars to a “terrorist” group, but she returned to Turkey on July 16.

The newspaper said the agreement was “personally sealed” by Trump but fell apart when Brunson was transferred to house arrest.

Erdogan addressed the claims, stressing that Turkey had “never made Pastor Brunson a bargaining chip.”

However, he said Ankara had asked for Washington’s help in securing Ozkan’s return home.

“But we didn’t say: ‘In return for this, we will give you Brunson’. Nothing like this was discussed,” Erdogan insisted.

Brunson risks up to 35 years in jail if found guilty of charges of carrying out activities on behalf of two groups deemed by Turkey to be terror organisations — the Gulen movement and the Kurdistan Workers’ Party (PKK).

Brunson rejects the accusations while US officials have repeatedly insisted the pastor is innocent.

Temperatures were further raised when the US threatened in June to block the delivery of F-35 stealth jets to Turkey if Ankara buys Russia’s S-400 air defence system.

But Erdogan suggested Turkey would not sit idly by if this happened.

Another source of tension is the prison sentence of 32 months for deputy director general of Turkish lender Halkbank Mehmet Hakan Atilla convicted of plotting to help Iran evade US sanctions on billions of dollars of Iranian oil proceeds.

Turkish officials insist Atilla is innocent but Halkbank still faces a penalty from the US Treasury.