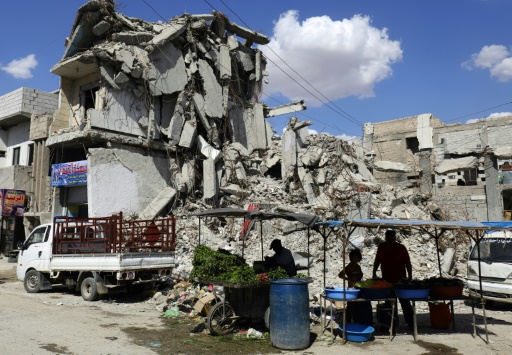 Washington (AFP) – The United States said Friday it is suspending $230 million budgeted for stabilization projects in Syria, citing the aid pledged by other partners in the coalition against the Islamic State group.

But officials denied the United States was pulling out of Syria, saying Washington will support long-term reconstruction, but only under the currently stalled 2012 Geneva roadmap, which requires a political transition in Damascus opposed by President Bashar al-Assad and his Russian allies.

Secretary of State Mike Pompeo has “redirected” $230 million originally set aside to help begin the recovery of areas liberated from Islamic State (IS) group control after coalition partners committed $300 million of their own, State Department spokeswoman Heather Nauert said.

The comes in response to President Donald Trump’s insistence that allies and partners “increase burden-sharing” in the war-wracked country, she said.

The decision was made based on the additional pledges, including $100 million from Saudi Arabia and $50 million from the United Arab Emirates, and “the already significant military and financial contributions made by the United States to date,” according to Nauert.

“This allows us to free up our tax dollars to use on other key foreign policy priorities,” she said in a briefing for reporters.

“This decision does not represent any lessening of US commitment to our strategic goals in Syria. The president has made clear that we are prepared to remain in Syria until the enduring defeat of (IS), and we remain focused on ensuring the withdrawal of Iranian forces and their proxies,” she said.

Brett McGurk, the special White House envoy to the coalition against IS, said the jihadist group has been cleared from some 99 percent of its former territory in Syria and that preparations for the final phase of the campaign are being made.

He said stabilization operations involving demining, restoration of water and power supplies and other basic needs are well underway in recaptured areas.

For example, he said, potable water supplies have been restored to all 26 districts of Raqa, which was devastated in the campaign to oust IS fighters.

“We are focused on stabilization, getting people back to their homes,” McGurk said.

However, he added, the country’s long-term reconstruction needs “are tied very much to the political process in Geneva.”

“We have made very clear that international reconstruction assistance for Syria will not be coming in until we have unalterable progress on the Geneva track and looking towards a political transition.”

Assad and Moscow have opposed the UN Security Council-supported Geneva approach because it has threatened to force the Syrian president from power.

On Tuesday, Staffan de Mistura, the UN peace envoy for Syria, said that he plans to host Iran, Russia and Turkey for talks in September on finalizing a committee to write a new Syrian constitution, which could be the first step in reviving the Geneva plan.

The State Department’s acting assistant secretary for the near eastern affairs David Satterfield questioned whether the Assad regime is “stonewalling” the UN peace effort.

“There is not going to be, by international agreement, reconstruction assistance to Syria, unless the UN — not Moscow, not Washington, not any other capital — certifies that a credible and irreversible political process is under way,” he said.