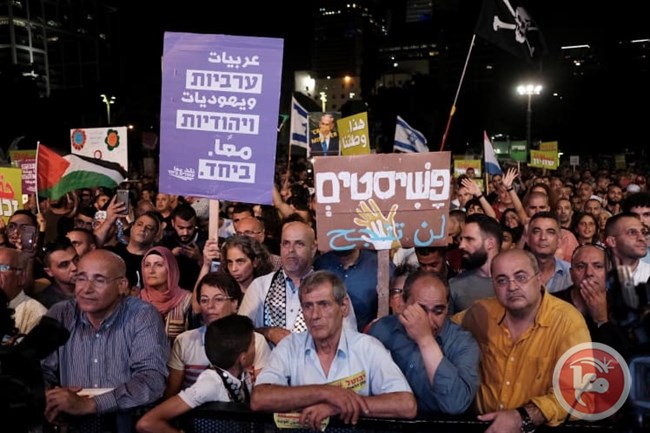 The Maan News Agency reported that 30,000 people, mainly Palestinian-Israelis but also Jewish supporters, rallied in downtown Tel Aviv on Saturday against the so-called ‘Jewish nationality law’ passed by the far right wing Likud Party and its allies, which places ‘sovereignty’ in the Jewish community of Israel and formally reduces Palestinian-Israelis to second-class citizens, making the colonization of the Palestinian West Bank by Jewish squatters state policy. It is widely viewed by centrist and leftist Israelis and Palestinian-Israelis as an open declaration of Apartheid.

Amos Schocken, publisher of the liberal Haaretz newspaper, addressed the rally. His newspaper called it “a badge of honour for Israeli civil society.” A Haaretz editorial observed of the Palestinian-Israelis, “The most excluded and oppressed group in Israel, and the one most seriously harmed by the nation-state law, proudly made its voice heard in the city square, receiving an impressive show of solidarity from Israel’s Jewish citizens.” according to BBC monitoring.

Although the organizers of the rally had banned flags, some demonstrators brought them and waved them, both Palestine and Israel flags. 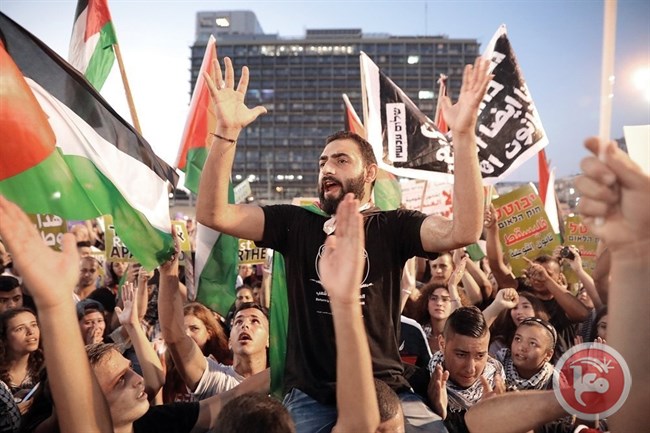 Far right Prime Minister Binyamin Netanyahu mischaracterized the flag of Palestine as the flag of the PLO and quipped that “There is no better evidence of the Nationality Law’s necessity.”

The center-right Yediot Aharanot, which is being blackmailed by Netanyahu and Adelson with a threat to increase the circulation of the free ‘Israel Today,’ and put it out of business, ran a front-page column saying, “Not one demonstration was held last night, but two. One, by Palestinian flag wavers. They don’t seek equality, but the denial of Israel’s right to exist. The second demonstration was by those demanding equality. The former are enemies from within, the latter are partners.”

It is baffling that right wing Israelis interpret any symbol of Palestinian identity as a threat to the existence of Israel. Isn’t it all right for Palestinian-Israelis to be proud of the flag of their ethnic heritage?

Let me let you in on a little secret. Jewish synagogues throughout the United States fly the Israeli flag. It isn’t a sign that they are hostile to the United States or that they want to undermine it or that they have dual loyalties. It is a sign that they are proud to be Jewish, and who would deny that they have a lot to be proud of? Of course, the US and Israel sometimes do come into conflict, as when the Israeli government vehemently opposed President Obama’s adoption of the Iran deal. The majority of Jewish Americans, firm Democrats, supported Obama even while they attended Friday services festooned with the Israeli flag. If it is going to be the official position of Jewish nationalism that only one flag per country is allowed, then the synagogues are in big trouble.

Former member of the Israeli parliament or knesset, Palestinian-Israeli Muhammad Barakeh, speaking at the demonstration, gave his support to flying the Palestinian flag: “It is the flag that the Nationality Law tries to erase from history, but it is the flag of a proud nation. All the Jews and all the Arabs are rushing to the square in their thousands in order to repeal this abomination of a law and remove the stain left by the Netanyahu government. Israel and Zionism have two options to choose from — genocide or apartheid. We are here together — Arabs and Jews — to say that we will not allow it . . . Prime Minister Netanyahu, we will not go away, you will.” 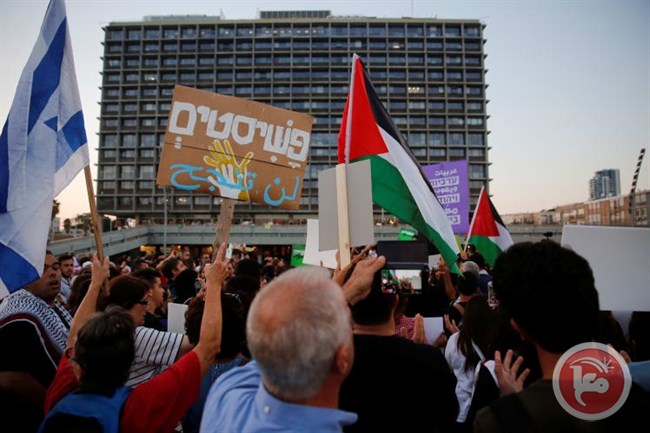 Shuaa Mansour Masaru, the Palestinian-Israeli mayor of Taybeh, called the Nationality Law “very dangerous” and added “We gathered here to protest against this racist law which states that there are two types of human beings in this country.”

Israel claims on the order of 8 million as its population, though demographic statistics are political and that sounds to me inflated. It was 6 million not long ago and I don’t understand where the increase comes from. Some social scientists also think that about a million Israeli Jews live abroad but are still being counted as residents. Anyway, 25.2 percent of the population is non-Jewish, according to the CIA Factbook. Israel also rules over nearly 3 million stateless Palestinians in its West Bank colony and controls the air, land and water of Gaza, with nearly 2 million more stateless Palestinians.

Just as white nationalists in the US do not consider Mexican-Americans to be real Americans, racial-supremacist Likudniks do not consider Palestinian-Israelis to be real Israelis. Proponents of ethno-nationalism reject ‘civic’ nationalism of the sort enshrined in the American and French constitutions. They make the ‘nation’ coterminous with a particular ethnic group to the exclusion of all others. This approach was typical of Central European nationalism in the late nineteenth century through 1945 (and is resurgent again today in Hungary), and it is the context for the rise of the Likud Party. In contrast, US and French legal practice is to accept as citizens those who pledge allegiance to the constitution and the nation over-all. In Israel today, that pledge is not enough. Belonging is not an act of will or acceptance of principle. It is a matter of being born into the right ethnic group, as defined by the High Rabbi. (That is, even some 300,000 self-identified Russian and Ukrainian Jews in Israel are not recognized as part of the Jewish nation because their mothers were Gentiles).

In ‘civic’ nationalisms, multi-culturalism is possible. Eva Longoria can be proud of being of Mexican heritage as well as a patriotic American.

So what has happened in Israel would look like this in the US. Congress would have declared that sovereignty is invested only in the community of white Protestants. Non-white non-Protestants could not bring cases before the US Supreme Court. Congress would pass a law making English the official language of the United States (no, it presently is not, and millions of Americans through history have functioned primarily in other languages–German, French, Chinese, Spanish, Arabic, Italian, Yiddish, Japanese, etc., etc.) The languages of non-white non-Protestant communities, especially Spanish, could not be used in court or government offices. Their property could be confiscated by the government at will and without compensation, and they could not sue over it.

But the racialist and proto-fascist Likud propaganda machine would like to configure anyone protesting the Israeli Apartheid law as an ‘anti-Semite.’ But anti-Semitism is a form of racism and ipso facto protesting a racist law cannot be anti-Semitism. For Netanyahu and his corrupt, rich, coddled cronies, ‘anti-Semitism’ is ‘anything that gets in the way of Likud plans.’

I think you might have to go back to 1982 to find as big a progressive Israeli rally by both Jewish Israelis and Palestinian Israelis. At that time, some 100,000 came out against the Likud attack on little Lebanon, which Osama Bin Laden said was one of the things he was avenging on 9/11.

It is a remarkable turn of events that 30,000 of various ethnicities came out in Tel Aviv this weekend. But the question is whether it will be any more consequential than the anti-war demonstration in 1982, which turned out to be a fluke rather than a pointer toward the direction Israeli policy would take. In the aftermath it would become more war-like and expansionist.