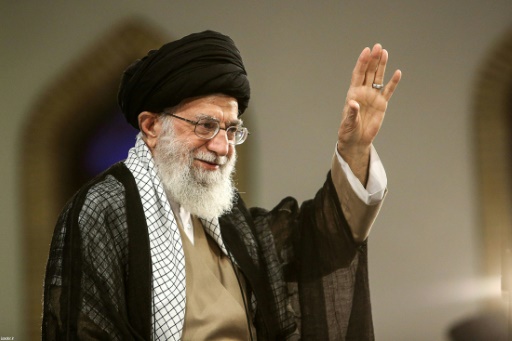 Vienna (AFP) – Iran is sticking to the terms of its nuclear deal with world powers, a UN atomic watchdog report showed Thursday, despite ongoing uncertainty over its future.

The report from the International Atomic Energy Agency showed that Iran was still complying with the key parameters of the Joint Comprehensive Plan of Action (JCPOA), agreed in 2015 by Iran and the US, China, Russia, Britain, France and Germany. 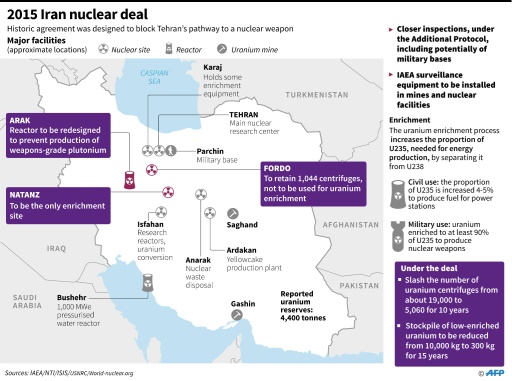 AFP/File / AFP. Map and factfile on the 2015 Iran nuclear deal, with which Iran will still comply despite the future of the deal being thrown into doubt after US President Donald Trump withdrew from the pact in May 2018.

It comes despite the future of the deal being thrown into doubt after US President Donald Trump withdrew from the pact in May and re-imposed US sanctions.

The latest report says the IAEA had had access “to all the sites and locations in Iran which it needed to visit”.

The agency repeated language in its previous report emphasising the importance of “timely and proactive cooperation in providing such access” on Iran’s part.

A senior diplomat with knowledge of the issue said that the language was a way “to send a message to Iran to prevent potential problems” rather than being caused by any particular behaviour on the part of the Iranians.

The report said Iran’s stockpiles of low-enriched uranium and heavy water had both slightly increased since the last report in May, but were still under the limits agreed in the deal.

Iran’s economy has been battered by the return of US sanctions following Trump’s decision, undermining support for the deal within Iran.

On Wednesday Iran’s supreme leader Ayatollah Ali Khamenei said Tehran should be ready to “set aside” the JCPOA if it is no longer in the country’s national interests.

However, Khamenei said talks should continue with European states, who have been trying to find a way to salvage the agreement.

Last week, the EU agreed an 18 million euro package of assistance to Iran “for projects in support of sustainable economic and social development” in the Islamic Republic, the first tranche of a wider package worth 50 million euros.

Most foreign firms have abandoned investment projects in Iran, and the next phase of renewed US sanctions in November will hit the crucial oil sector.

Speaking on Thursday while attending meetings of EU foreign and defence ministers, the EU’s foreign policy chief Federica Mogherini said that despite disagreements with Iran over other issues, “we believe that addressing regional disagreements with Iran can be done in a more effective manner if we maintain the nuclear deal in place”.

French Foreign Minister Jean-Yves Le Drian, also speaking in Vienna, said that in his opinion Iran was respecting “the fundamentals of the JCPOA”.

However, he added that “Iran cannot avoid discussions, negotiations on three other major subjects that worry us,” namely Iran’s ballistic missile programme, the long-term future of its nuclear programme and its role in conflicts in the wider region.

In June, in a bid to mount pressure on the Europeans, Iran announced a plan to increase its uranium enrichment capacity with new centrifuges in the event that the agreement collapses, while still denying any desire to build a nuclear weapon.

Under the 2015 agreement, Iran can only enrich uranium to 3.67 percent — far below the roughly 90-percent level needed for nuclear weapons.

Featured Photo: KHAMENEI.IR/AFP/File / – Iran’s Supreme Leader Ayatollah Ali Khamenei, pictured August 13, 2018, says talks should continue with European states, who have been trying to find a way to salvage the agreement.