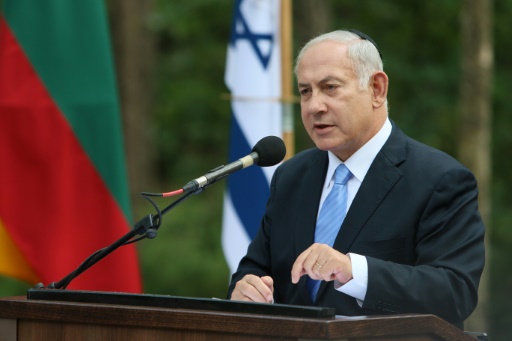 London (Middle East Monitor) – Israeli Prime Minister Benjamin Netanyahu has told reporters accompanying him on his visit to Lithuania that he is seeking to divide the European Union and trying to prevent a consensus over Europe’s position on issues related to the Palestinians and Iran.

Before leaving for a tour of the Baltic states, Netanyahu said that he is interested in balancing relations between the EU and Israel, which are always friendly, in order to receive more honest and credible treatment. “I am accomplishing such a goal through making contacts with blocs of countries within the European Union, Eastern European countries, and now with the Baltic states and, of course, with other countries as well.”

According to Israeli media, Netanyahu told his Lithuanian counterpart, Saulius Skvernelis: “I would like to thank you for the firm position you expressed in the EU’s committees for truth, Israel and integrity. In many instances, Israel is not being treated fairly in Brussels. Israel’s image has been recurrently distorted and it is comforting to see that you are taking the position of clarity, truth and courage.”

In December, Lithuania helped Netanyahu to be hosted in the EU headquarters by inviting him to breakfast with European foreign ministers before their monthly meeting. The invitation was considered to be a ruse, as it ran counter to EU protocol and provoked anger in the office of the EU High Representative for Foreign Affairs and Security Policy, Federica Mogherini.

Haaretz reported on Friday that after a systematic attempt to strengthen relations between Israel and countries ruled by extremist nationalist parties in Eastern and Central Europe — in order to sabotage the consensus required among the 28 EU member states for a unified policy — Netanyahu’s unveiled his strategy of using countries within the EU, such as the Visegrad states led by the extreme right-wing Hungarian Prime Minister Viktor Orban, to change the Union’s positions on the Palestinian issue and Iran. Netanyahu is taking advantage of Orban’s vote in international EU committees to, at the very least, prevent European consensus, thereby weakening the possibility of advancing international initiatives on these issues.

Israel’s relations with Latvia and Lithuania have been strengthened in recent years, while Estonia has been trying to maintain neutrality in the Israel-Palestine conflict. Haaretz said that there is a brain drain in the Baltic States and this is an issue through which Israel seeks to boost its relations in the region.

Netanyahu is also looking to exploit the concern in the Baltic and Eastern European states about Russia’s policy in the area, especially after the annexation of the Crimea. Israel sells those countries weapons and security expertise.

When he said that there is “national pride” in Lithuania, “as there is in Israel,” Netanyahu was echoing the words of right-winger Orban. “I think that an important part of the excellent relations between Israel and Hungary is our relationship as nationalist leaders,” he said during a recent visit to Israel. Netanyahu plans to participate in the Balkan leaders’ summit due to be held in Croatia.

Haaretz quoted EU observers as saying that Netanyahu’s approach hinders the possibility of Europe taking up unified positions. Israel’s moves in this respect have become intensive and aggressive in the past three years. “It is difficult for the EU to have one clear word about the Israeli-Palestinian conflict,” they point out.

The newspaper added that Netanyahu’s policy in this context comes at a cost, not least because it is at the expense of major liberal countries in Western Europe. Netanyahu is effectively conspiring against these countries, including Germany and France, which are friendly to Israel, in order to prevent international consensus on the idea to which he pays lip service in his speeches to international and EU committees, namely the two-state solution.