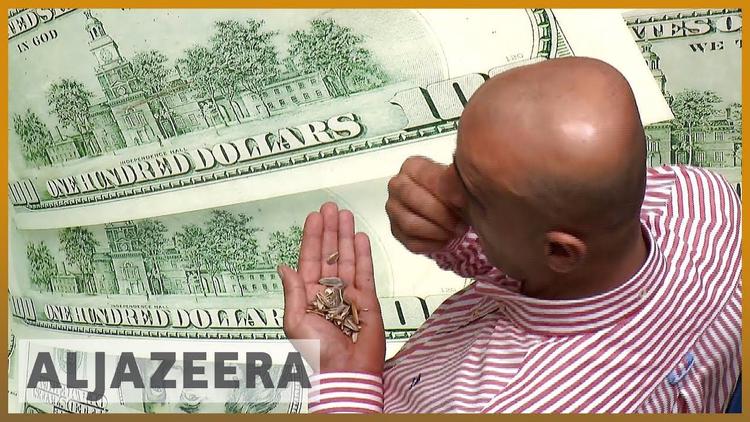 (Middle East Monitor) – The Iraqi government is worried about US sanctions imposed on Iran, which seem to have a negative impact on the Iraqi economy too.

There is currently political unrest in Iraq, as the protests calling for economic reforms have restarted.

Baghdad declared that it would ask Washington to exempt Tehran from the sanctions because the Iraqi economy depends on the Iranian economy.

Officials at the Iraqi Government and the Central Bank of Iraq have revealed that “a delegation will travel to Washington to seek exemptions from the implementation of sanctions, but did not disclose the date of the visit.”

The officials stated that they are asking each ministry to set up a list of necessary imports for the Iraqi economy, and exemptions requests will cover the goods mentioned.

Iraq has previously declared that it would abide by the US sanctions imposed on Tehran.

The Iraqi prime minister stated that his government does not approve of the US sanctions imposed on Iran, but would abide by them to protect its interests.

“We are against imposing sanctions in the region, for siege and sanctions only destroy societies rather than weaken regimes,” said Al-Abadi during a news conference following a cabinet meeting.

“We consider them [the sanctions] as a fundamental and strategic mistake and that they are incorrect, but we will abide by them to protect the interests of our people. We won’t be interacting with them or approve of them, but we are committed to them,” added Al-Abadi.

Press reports spoke about the gravity of the statements of the Iraqi Prime Minister, suggesting that they will negatively affect his stay at the office.

Leaders of rival Shiite factions, which are seeking the prime minister’s position, found the opportunity to embarrass him and portray him as biased toward the United States rather than Iran.

Baghdad is facing a significant dilemma, for it imports necessary goods from Iran and the United States is vowing to impose firm sanctions on countries and companies dealing with Iran.

Iraqi officials fear a shortage of essential goods in case Baghdad abides by all these sanctions, as this could cause a political turmoil at this critical political situation in Iraq.

The value of the goods imported by Iraq from Iran amounted to six billion dollars in the last twelve months, ending in March 2018, representing about 15 per cent of Iraq’s total imports in 2017.

An official at the Iraqi Ministry of Commerce stated that energy, construction and cars companies managed by the government and public sector will be damaged most.

“We heavily rely on Iran as a provider of building materials and vehicles, including automobile parts, due to low prices and easy shipment across many of the common border crossings,” he said.

An official at the US Department of State announced that the ministry was discussing Iran’s policy with its partners around the world.

“We have addressed all countries in the world using the same message, as the president clarified that the United States is fully committed to the implementation of all our sanctions.”

The US sanctions, which have been implemented earlier this month, targeted Iran’s gold and other precious metals business, in addition to Tehran’s purchases of the US dollar and its automotive industry. The rest of the sanctions will be implemented in November.

The first phase of US sanctions includes banning dollar exchange with the Iranian government, in addition to prohibiting trade exchanges related to precious metals, especially gold, and imposing sanctions on institutions and governments dealing with Iranian Rial or government bonds.

It also includes a ban on the supply or purchase of some metals, mainly aluminium, iron and steel, as well as restrictions on the car and carpet industries in Iran, and a ban on the import or export of industrial technology associated with civil and military uses.

It also includes sanctions imposed on Iran’s Central Bank and its money transactions.

In May, Trump announced his country’s withdrawal from the nuclear deal signed with Iran in 2015 which aimed at halting its nuclear activities in return for lifting economic sanctions.

Trump described the nuclear deal, or the so-called Joint Comprehensive Plan of Action, as a very bad unilateral agreement that should never have been concluded.

Trump claimed that the deal did not impose enough restrictions on Iran’s “destabilising” activities in the region.

Analysts stated that influential people in the White House, including Pompeo and US National Security Adviser John Bolton, have an impact on Trump’s position regarding Iran and his tendency to target the central policies of his predecessor Barack Obama.

Iran insists that its nuclear program is entirely peaceful and that the International Atomic Energy Agency (IAEA) has confirmed its compliance with its obligations under the nuclear deal concluded with major powers.

The Agency confirmed that its inspectors managed to have access to all sites they wanted to visit in 2017, but did not seek to enter any military sites because of the entry ban, in a move that the United States considered as “suspicious.”

Iran is considered one of the largest oil producers in the world, with exports worth billions of dollars a year. However, nowadays it is witnessing a great economic decline, especially after the streets protest which demonstrated against increasing prices and the decline of the currency.