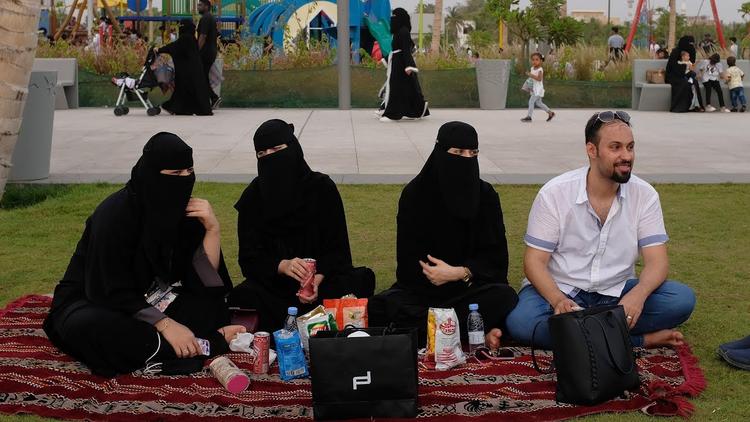 A Saudi woman poses with her new driving license after the country’s ban on women driving was lifted in June, 2018. Photo: Gehad Hamdy/DPA/PA Images. All rights reserved.Saudi Arabia’s ongoing crackdown on women’s rights activists undermines Crown Prince Mohammed bin Salman’s own reform agenda. It reveals a disconnect between this young leader who styles himself as a reformist and a women’s rights advocate and the new reality in the Muslim world today.

Increasingly, Muslim women are reclaiming an Islam that has long espoused equality, justice and freedom for all. These women are leading change from within their communities. Through their collective actions, they have overcome long-standing barriers by reforming laws, introducing new narratives on religious thought and histories, and creating new spaces (online and offline) for movement building across the Muslim world.

In the largest Muslim country in the world, Indonesia, women ulama are working with women’s rights activists to assert themselves. They’ve issued authoritative fatwas against domestic violence, child marriage and environmental destruction. As they change the landscape of social and religious discourse, Muslim women everywhere are seeing not only that change is possible – but that it is coming from their own work on the ground.

“Muslim women are reclaiming an Islam that has long espoused equality, justice and freedom for all.”

In India, women qadis have set up independent dispute resolution centres to resolve marital disputes, provide counselling and even conduct marriages. They offer an alternative to the traditional, informal qadi system that is often biased against women. Building on the Qur’an, Islamic jurisprudence (fiqh), the national constitution and women’s rights, their approach is spreading across continents through a borderless, informal network of Muslim women activists.

This same approach, for example, was adopted by women’s rights activists in The Gambia in their ‘Drop the Knife’ campaign against female genital mutilation, which eventually led to the harmful practice being outlawed.

Closer to Saudi Arabia, in Morocco, a national alliance of women’s rights activists, academics and theologians successfully pushed the government to end legal discrimination against women in the family by reforming the country’s family status code, in 2004. Now, it’s arguably the most progressive family law in the Muslim world; marriage is defined in this law as a partnership of equals, with this equality justified in the name of Islam.

Morocco’s reform emboldened women’s rights activists in diverse Muslim contexts to escalate advocacy for equality and justice. Yes, opposition to these movements for change is rampant and fierce. But this has only strengthened their resolve to march forward.

“Yes, opposition to these movements is rampant and fierce. But this has only strengthened their resolve.”

In Malaysia, Muslim women’s rights activists have for decades challenged the state’s use of Islam to justify discrimination against women. In 2009, amid rising conservatism and extremism, we and other women launched a global movement for equality and justice in the Muslim family, called Musawah (meaning ‘equality’ in Arabic).

This movement’s arguments for reform are grounded in Islamic principles, human rights standards, constitutional guarantees of equality and women’s lived realities. It is bringing together Muslim women from diverse national contexts and creating new connections beyond borders.

These movements are unstoppable. Muslim women’s rights activists have created new international networks of solidarity and collaboration over language barriers and across continents. Struggles are being waged across all aspects of life. There is energy for genuine dialogue and partnerships with all who seek reform – as long as women’s autonomy is respected.

Victories, however small, build confidence, while losses or setbacks enhance rigour. As the Indonesian grassroots women ulama declared earlier in 2018, women’s leadership in the Muslim world is a historical inevitability.

More and more women are claiming their rights grounded in the belief in an Islam that upholds equality and justice for all. They actively engage in the rich Muslim legal tradition with sophisticated tools and concepts that open the possibility of reform. They are shaping and influencing how Islam is understood and used in ways that make sense to today’s realities.

“Women’s leadership in the Muslim world is a historical inevitability.”

Over the past three months, the Saudi government has arrested at least 14 (and continues to detain at least six) women’s rights activists – including long-term advocates for ending the ban on women driving and the country’s male guardianship system, which requires women to get permission from male relatives for activities including travelling abroad or getting a job.

These Saudi women who were arrested are part of the growing international community of Muslim women advocating for equality and justice. Their gains are the collective gain of this broader community of activists, and likewise are their losses. Their silencing is felt as an attack on us collectively.

Individual women may be silenced, but rest assured that our collective voice continues to speak truth to power.

The arrests of our Saudi sisters have come despite promises of reform from Crown Prince Mohammed bin Salman. He would do better to engage in an open dialogue and exchange of ideas with them. These women understand change and what it takes to transform attitudes, behaviours, relations, institutions and worldviews. They could be his allies for genuine reform.

Pathways for social, economic and political reform are diverse and contextual. But, as activists ourselves, we know that genuine reform cannot be achieved nor sustained without women’s full and meaningful participation as equals. Until our Saudi sisters are sitting at the table as equals, Saudi Arabia is on the wrong side of history.

Kamala Chandrakirana is a co-founder of Musawah, former Chairperson of Indonesia’s National Commission on Violence against Women, and member of the United Nations Working Group on discrimination against women in law and practice for 2011-2017.

National Post: “What women can and can’t do under the Saudi male guardianship system”

Zainah Anwar is a co-founder and the executive director of Musawah, a global movement for equality and justice in the Muslim family, as well as a co-founder of Sisters in Islam. Find Musawah on Twitter @Musawah.