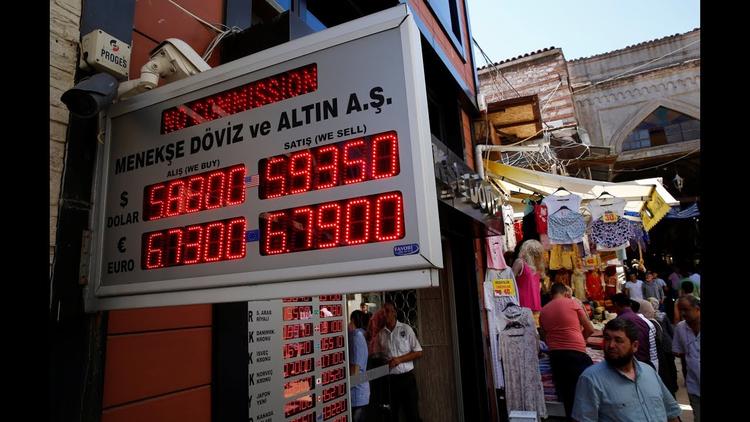 Turkish strong man Tayyip Erdogan is complaining about Donald Trump’s playing hard ball with his country, at a time when the Turkish lira is collapsing more dramatically than at any time since 2001, before the ruling Justice and Development Party (AK) came to power.

Turkey’s currency has lost a third of its value against the dollar this year and went into a further tailspin late this past week. The last time I was in Turkey about a year and a half ago, you got three liras for a dollar. Today is it 6.5 liras to a dollar. This fall in value hurts Turkish consumers who buy imported goods, but it also hurts foreign investors hoping to make a pile in Turkey and then send the profits back home.

Hence, in the first four months of 2018, Foreign Direct Investment was off 21%.

Erdogan could do something about the inflation that is in part driving the currency crisis, by simply raising interest rates. That move would, however, hurt the small businessmen and farmers in the center of the country, who are his main political base, and who need cheap credit to thrive. He is therefore resisting a rate hike. There was a time not so long ago when the president could not have stopped interest rates from rising by fiat, but Erdogan has gathered enormous power in his hands in recent years.

Turkey has gotten on Donald Trump’s nerves by holding an American Christian missionary on terrorism charges, and by being agressive toward US Kurdish allies in Syria. He is also seeking Russian weaponry, even though Turkey is a member of NATO.

On Friday, Trump tweeted out new tariffs on Turkey with regard to steel and aluminum, saying that relations betwee the two countries are ‘not good.’

That Tweet helped send the Lira down another 18% briefly.

Erdogan’s son-in-law is finance minister (yes), and he seems clearly not up to the job.