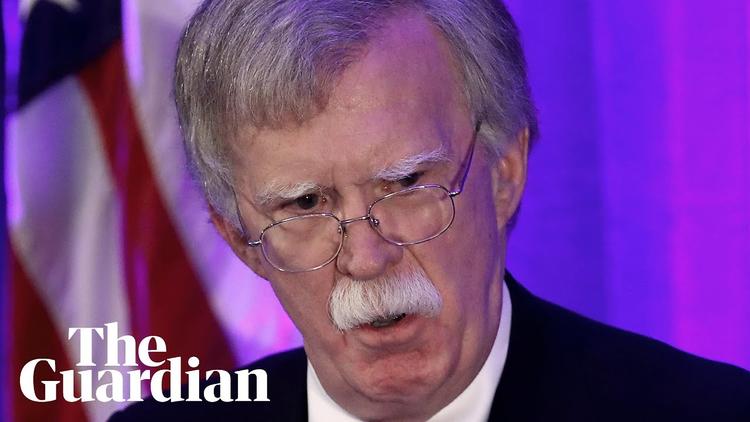 U.S. National Security Advisor John Bolton is at it again. He recently issued a blistering rebuke of the International Criminal Court (ICC): “We will let the ICC die on its own. After all, for all intents and purposes, the ICC is already dead to us.”

Is this another example of U.S. President Donald Trump withdrawing the United States from the international community? Is it yet another harbinger of the end of the post-1945 “rules-based international order?”

John Bolton strongly criticizes the International Criminal Court in this clip on the Guardian website.

No. That’s because “rules-based international order” was never what it appeared to be anyway. Rather than a benign de facto agreement on problem-solving through discussion rather than armed conflict, it represents an exclusive club that ensures the perpetual dominance of some societies over others.

One of the reasons behind Bolton’s tirade is that the U.S. administration wants to prevent the ICC from following through on Palestinian requests to investigate the legality of Israel’s occupation of the West Bank and Gaza Strip.

Indeed, the Trump administration has proven over the last few months that it is more than willing to go out of its way to punish the Palestinians for daring to challenge Israeli domination, even when that “challenge” has taken the meekest of forms.

According to David Rothkopf, a prominent commentator: “It’s as if the U.S. State Department has handed over its entire Middle East policy to the Prime Minister of Israel.”

Bolton, as if to prove this point, said in his speech:

The United States will always stand with our friend and ally, Israel. And today, reflecting congressional concerns with Palestinian attempts to prompt an ICC investigation of Israel, the State Department will announce the closure of the Palestine Liberation Organization office here in Washington, D.C.

At the risk of employing what has become a cliché during the Trump presidency: This is shocking, yes, but not really surprising.

Trump is apparently seeking to destroy the apparently civilized way in which international politics has been conducted since the end of the Second World War — the so-called rules-based international order.

As Kori Schake explained in the New York Times:

Beginning in the wreckage of World War II, America established a set of global norms that solidified its position atop a rules-based international system … building institutions and patterns of behaviour that legitimize American power by giving less powerful countries a say.

Trump, so this argument goes, either can’t accept or doesn’t understand this, and is gleefully engaged in the process of wrecking it from the inside.

“This aggressive disregard for the interests of like-minded countries, indifference to democracy and human rights and cultivation of dictators is the new world Mr. Trump is creating,” Schake explains.

However, the notion of a broad and benign American-led world order makes less sense from the standpoint of those excluded by the system.

Indeed, for Palestinians, the Trump administration’s bullying may be more humiliating than previous presidencies, but in terms of substance, the difference is marginal.

A useful example comes from celebrated U.S. Secretary of State James Baker, who in 1989 threatened to defund the World Health Organization if Palestine were to join:

The United States vigorously opposes the admission of the PLO to membership in the World Health Organization or any other UN agency … To emphasize the depth of our concern, I will recommend to the president that the United States make no further contributions, voluntary or assessed, to any international organization which makes any change in the PLO’s present status as an observer organization.

Like Bolton’s attack on the ICC, the effect would be to punish a valuable and obviously benevolent partner in the “rules-based international order” merely to ensure that Palestine would be kept out.

Under successive presidents since George H.W. Bush, the U.S. has promoted or enabled some form of negotiations between Israel and the Palestinians, but they’ve always taken place outside the framework of international law.

Twenty-five years ago this month, PLO Leader Yasser Arafat shook hands with Israeli Prime Minister Yitzhak Rabin on the White House lawn and agreed on a phased plan to end the occupation by the turn of the century. There has been virtually no progress and no enforcement by the United States since.

The Americans show scant concern for human rights, the rights of refugees or for UN Security Council resolutions when it comes to Israel-Palestine.

Instead, the U.S. has used its veto power some 43 times to protect Israel from the overwhelming will of the international community, and it has withdrawn and defunded international agencies such as UNESCO and the UN Human Rights Council in retribution for those entities recognizing Palestine.

It’s not as if the Palestinians have been unco-operative. Since the end of the second intefadeh, the Palestinian Authority — the non-sovereign entity that has governed parts of the West Bank — has indulged the will of the international community to a degree that is almost craven.

It has curtailed violence against Israel and pursued U.S.-led security sector reform. At the same time, it’s taken steps through bilateral negotiations and through the UN to join the “rules-based order.” All of which is in pursuit of the so-called two-state solution — a partition plan wherein the Palestinians would, at the very least, accept the loss of 78 per cent of their historic territory.

When viewed in this context, we can see that while Trump’s White House may be more overtly aggressive in its language and willingness to be vindictive toward Palestine and the Palestinians, in substance it’s not significantly different from previous administrations.

Perniciously excluding Palestine from the “rules-based order” is a U.S. priority under any president, whether they’re blue, red … or orange.