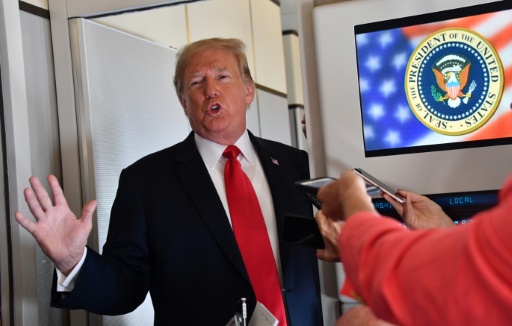 Fargo (United States) (AFP) – Donald Trump on Friday urged his attorney general to investigate the anonymous author of a damning op-ed, escalating his long-running battles with the media and highlighting his suspicions that people are seeking to overthrow his presidency.

Trump, battling one of the deepest crises in his 20-month presidency, has raged about Wednesday’s searing essay, branding its unidentified writer a “gutless” coward and accusing The New York Times of borderline treason for publishing it.

“I would say Jeff (Sessions) should be investigating who the author of that piece was because I really believe it’s national security,” Trump told reporters traveling with him in North Dakota.

“The Times should never have done that, because really what they’ve done is virtually, you know, it’s treason,” the president said in an interview with Fox News broadcast earlier Friday.

Asked on Air Force One whether action should be taken against the Times, Trump said “I’m looking at that right now.”

Trump appeared to be calling for a criminal investigation despite there being no indication that the mystery author broke any laws by releasing his extraordinary column, which detailed how “unsung heroes” were quietly working within the administration to frustrate an amoral president’s “worst inclinations.”

The Times said in a statement that any such investigation would be an abuse of power, and that Trump’s “threats… underscore why we must safeguard the identity of the writer of this op-ed.”

“We’re confident that the Department of Justice understands that the First Amendment protects all American citizens and that it would not participate in such a blatant abuse of government power,” the newspaper said. 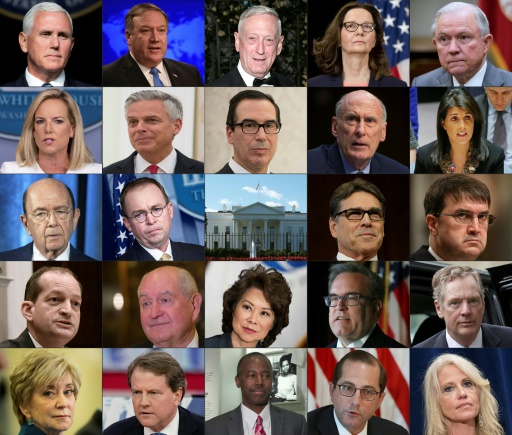 A “whodunnit?” style guessing game has raged in the corridors of power and on social media over the identity of the author of an anonymous op-ed in The New York Times, prompting nearly every cabinet-ranked member of the US government to deny involvement

A “whodunnit”-style guessing game has raged in the corridors of power and on social media over the author’s identity, prompting nearly every cabinet-ranked member of the government to deny involvement.

Among them was Trump’s United Nations ambassador Nikki Haley, who wrote her own op-ed Friday that assails her unnamed fellow senior official for taking the “very dangerous” step of outlining how members of Trump’s team are hamstringing the president.

“A central part of our democracy requires that those who work directly for the president not secretly try to undermine him or his policies,” Haley wrote in The Washington Post.

“What the author is describing is an extra-constitutional method of addressing policy disputes within the administration. That’s wrong on a fundamental level.”

Trump also took aim at a book set for release next week by investigative journalist Bob Woodward which offered a damning portrayal of the administration’s inner workings, sparking yet another White House crisis and putting the president on the defensive.

Trump attacked the book as a “scam,” and suggested hardening the country’s “pathetic” libel legislation.

“Our libel laws should be toughened up so that if somebody writes things that are fraudulent and false, they get sued and they lose,” said Trump.

Later at a rally in Fargo, Trump called Woodward an “idiot.”

The respected White House chronicler’s “Fear: Trump in the White House,” a 448-page account of an out-of-control administration, draws on hundreds of hours of insider interviews.

– Not how democracy works –

Woodward’s is not the first unflattering investigation into Trump’s White House, but it has been particularly resonant coming from the man who together with Carl Bernstein authored the Watergate expose that brought down Richard Nixon.

He is one of the most respected living US journalists, and has written extensively on modern American presidents, earning praise from Trump in 2013 for his work on Barack Obama.

The book depicts Trump aides working to head off potential foreign policy disasters, disregarding a call by the president for the assassination of his Syrian counterpart, and removing from his desk an order that would have canceled a US-South Korea trade agreement.

Like Haley, Obama spoke out about the way aides were doing end runs around Trump, saying it was irresponsible to think “that everything will turn out OK because there are people inside the White House who secretly aren’t following the president’s orders.”

“That’s not how our democracy is supposed to work,” he told students at the University of Illinois, in a speech launching his involvement in the 2018 midterm elections.

The former president has endorsed dozens of Democrats in races across the country, and he will campaign with some of them ahead of the November 6 elections.

Featured Photo: AFP / Nicholas Kamm. US President Donald Trump speaks to the press aboard Air Force One as he travels to Fargo, North Dakota.