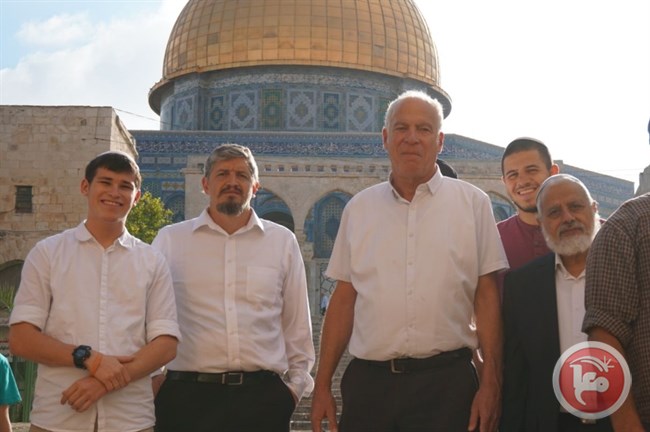 JERUSALEM (Ma’an) — Israeli MK and Minister of Agriculture and Rural Development, Uri Yehuda Ariel, along with dozens of Israeli settlers, stormed on Sunday the Al-Aqsa Mosque compound on the eve of the Jewish new year.

According to local sources, Ariel stormed the Al-Aqsa Mosque through the Moroccan Gate, under heavy protection by the Israeli forces, who were also deployed across the compound since early morning.

Sources added that while in the compound, Ariel gave a speech on the occasion of the Jewish new year.

Firas al-Dibs, head of the Public Relations and Media Department at the Islamic Endowment, said that Israeli forces detained a Palestinian, Raed Zoghair, who is an employee of the Al-Aqsa Mosque Reconstruction Committee.

Al-Dibs said that Zoghair was detained while he was working in the compound, cleaning the grounds with water.

Sheikh Azzam al-Khatib, the Director General of the Islamic Endowment, told Ma’an that Israeli settlers are taking advantage of Jewish holidays to carry out mass incursions into the Al-Aqsa Mosque compound to perform religious rituals under the protection of Israeli forces.

Areil’s presence at the Al-Aqsa comes after Israeli Prime Minister Benjamin Netanyahu decided to lift the ban that would previously not allow Israeli Knesset members to visit the Al-Aqsa Mosque once every three months, after incursions were banned since October 2015.

Netanyahu allowed members of the Knesset, mostly right-wing extremists who support the demolishment of the Islamic site in order to build a Jewish temple instead, to visit the Al-Aqsa Mosque once every three months.

The Al-Aqsa Mosque compound, which sits just above the Western Wall plaza, houses both the Dome of the Rock and Al-Aqsa mosque. The third holiest site in Islam, it is also venerated as Judaism’s most holy place, as it sits where Jews believe the First and Second Temples once stood.

While Jewish visitation is permitted to the compound, non-Muslim worship at Al-Aqsa is prohibited according to an agreement signed between Israel and the Jordanian government after Israel’s illegal occupation of East Jerusalem in 1967.

Despite the agreement with Jordan — which is the custodian of Al-Aqsa — Israeli authorities regularly allow Jewish visitors to enter the site, often under armed guard. Such visits are typically made by right-wingers attempting to unsettle the status quo at the site, and coincide with restrictions on Palestinian access, including bans on entrance and detentions.