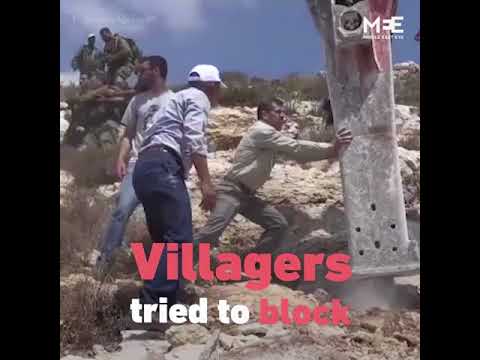 New York (Human Rights Watch) – All Israeli settlements in the occupied West Bank are illegal; some are more illegal than others. Take Mitzpe Yair, which violates not only international law but also Israeli law, because it was built without the government’s permission.

On August 31, I took a bus tour organized by Breaking the Silence (BTS), a group founded by Israelis who served in the Israeli Defense Force (IDF) and now seeks to expose the reality of occupation. Their regular tour includes stopping at a vantage point near Mitzpe Yair, one of many settlements in the area, where guides point out nearby Palestinian villages whose residents are fighting eviction orders issued by the IDF.

Just a week before our tour, six members of another activist group, Ta’ayush (“living together”), had come to stand with Palestinian villagers of Qawaqis, near Mitzpe Yair, who had just had construction materials confiscated by the IDF on the grounds they had built huts without permits. The army rarely issues permits to Palestinians who apply for them.

During Ta’ayush’s visit, Amiel Vardi, a well-known activist, phoned the IDF to demand it take similar action against the nearby Mitzpe Yair settlers, who had also built new structures, presumably without permits.

But when Ta’ayush activists approached Mitzpe Yair, settlers assaulted them and grabbed their cameras, said Vardi, 63, who said he sprained his ankle when a settler pushed him down a hill. He said soldiers standing nearby did not stop the assault or arrest anyone. An IDF spokesperson later blamed the activists for “instigat[ing] a provocation.”

A week later, as our two buses neared the Mitzpe Yair lookout, an Israeli army jeep and several soldiers blocked our path. Their commander showed us a written order declaring the area “closed” and demanded we leave immediately.

When two of our group calmly questioned the order, soldiers detained them both, as well as Michael Sfard, a lawyer for Breaking the Silence (and Human Rights Watch). Police later said the three had violated a military order, and while they were released after three hours without charge, they have been summoned for questioning on October 14.

Sfard, who has never been arrested before, told me, “Five years ago, no officer would dare do this, but this one knew he wouldn’t pay any price.”

If the threat of settler violence is what prompted the army to close a public road to activists instead of ensuring their safe passage, the IDF effectively gave veto power to settlers, enforcing it with arrests. Little wonder that settlers feel emboldened by the army, as Breaking the Silence has reported, and activists feel increasingly besieged, even as they vow to continue to expose the reality of occupation.