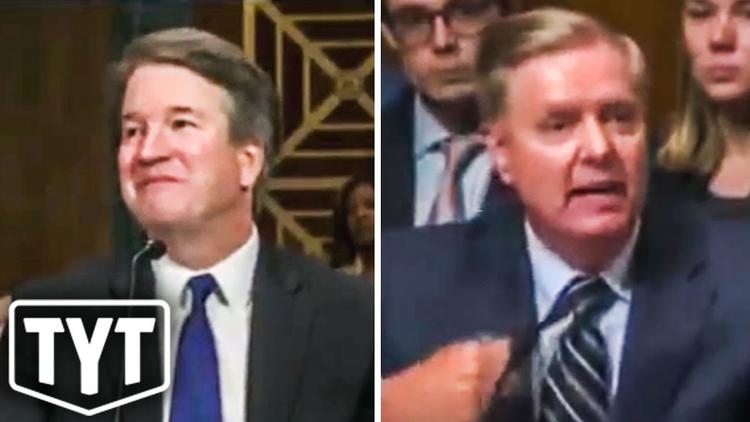 Senator Lindsey Graham (R-SC) made it abundantly clear in the hearing on Thursday that he cares more about Republican Party control of the Supreme Court than about rape victims. He implied that the charges of sexual assault that have surfaced against Brett Kavanaugh are a Democratic Party plot to deny Trump a Supreme Court justice.

He angrily threatened to smear the next Democratic nominee in turn.

Graham’s charge of conspiracy makes no sense, since the Democrats did not make Dr. Blasey Ford come forward, nor did they make the other three women come forward (one, in Montgomery county, has for the time being withdrawn her complaint with the police; perhaps she feared being treated by Graham and his pack hounds the way Dr. Blasey Ford was.)

The Republican evangelicals are always attacking Muslim fundamentalism for not giving equal rights to women. Actually modern Muslim states like Tunisia have women’s equality in the constitution. But it is true that some Muslim fundamentalists argue that a woman’s testimony in court should be worth half that of a man, which makes convicting a man of rape almost impossible. Ironically, the attitude of the Republican men on the Judiciary Committee is the same as would be that of a Muslim fundamentalist. They clearly believe that the testimony of Dr. Christine Blasey Ford, a high-powered professor of psychiatry at Palo Atlo and Stanford Universities, counts for less than that of a preppie white elite male.

Graham’s tone deafness to rape victims is nothing new. He has consistently voted against the Violence against Women Act. Indeed, the Republican Congress is going to let the act expire this weekend, ironically the same weekend they will shoehorn Kavanaugh onto the Supreme Court. Nobody on cable news will tell you that or make the connection.

In Graham’s worldview, the Democrats got their nominees, whom he voted for, and they are being beastly to take this one away from the Republicans. But he neglects to mention what was done to Merrick Garland by the GOP. And he unfairly blames the Democratic Party for Kavanaugh’s behavior as a besotted youth (one woman would have been an accusation; 4 are a certainty).

Sen. Graham called the hearing, which merely allowed Kavanaugh’s alleged victim to state her experience, the worst thing he had ever seen in his career in politics.

Graham supported the invasion and occupation of Iraq, which left hundreds of thousands dead, destabilized the Middle East, created 4 million refugees, and led to the rise of the hyper-fundamentalist ISIL/ Daesh in a formerly secular and socialist country. I’d gently suggest that that was the worst thing we’ve seen in his political career, and that whether Kavanaugh is called to account for instances in his youth where he, allegedly, tried violently to insert his penis in an unwilling girl pales in comparison. Or perhaps Graham thinks the honor of a white gentleman outweighs the displacement of 4 million brown Iraqis.

Graham’s hierarchy of values may explain why he as senator has not done more about the severe problem his own state of South Carolina has with violence toward women. It really is an outlier nationally in this regard.

The state, among all fifty, with the very highest rate of women killed by men in 2014 was South Carolina ((pop. 5 million).

In the past decade, South Carolina has ranked in the top five states for for women murdered by men.

The proportion of women killed by men per population in South Carolina is TWICE the national average in the US.

An astonishing 92% of female murder victims knew their murderer, and 62% had been in an intimate relationship with the killer.

Some 36,000 domestic and intimate partner assaults are reported every year in South Carolina.

South Carolina’s rate of sexual assault has been higher than the national average since 1982 and increased by 12% a year in some years of this decade.

More than half of all victims of sexual assault in South Carolina are not seen by a Sexual Assault Nurse Examiner.

Few prosecutions of sexual assault in South Carolina result in a conviction on that charge; large numbers of cases are never brought, large numbers of the cases brought are dismissed, and most convictions are the result of plea deals in which defendants cop to lesser, non-sexual charges (36% of those charged are only convicted in this way statewide).

Some South Carolinian newspapers have attributed the unusual rates of violence against women in the state to “southern culture” (by which they seem to mean a kind of patriarchy in which the male head of family feels he ‘owns’ the other family members and that outsiders have no business with his private affairs). The leniency of court sentencing, such that violent men who attack women are allowed back out on the street after short terms in jail, is also blamed.

Another indication of low status for women is the rate of death in childbirth. South Carolina has the 9th worst record among the 50 states on this measure. In California, where people in government actually care about the lives and welfare of women, maternal mortality has been cut in half.

In general, South Carolina is a dangerous state, with 501 violent crimes per 100,000 population annually, 35% higher than the rest of the US.

Perhaps what with being a senator and lawmaker and elite and all, Sen. Graham could do something about the high rates of violence against women in his state.