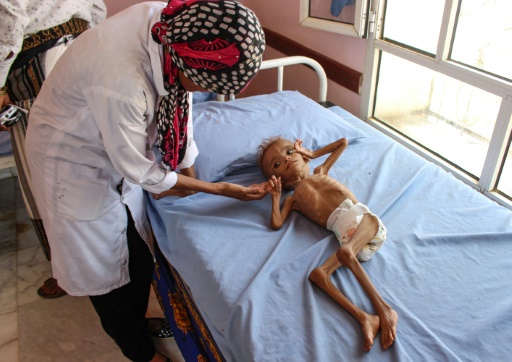 Sanaa (AFP) – More than five million children are threatened by famine in war-torn Yemen as prices soar, a charity said Wednesday, warning an entire generation may face death and “starvation on an unprecedented scale”.

The three-year conflict between Yemen’s Saudi-backed government and Huthi rebels linked to Iran has pushed the already impoverished country to the brink of famine, leaving many unable to afford food and water.

“Millions of children don’t know when or if their next meal will come,” said Helle Thorning-Schmidt, head of Save the Children International.

“This war risks killing an entire generation of Yemen’s children who face multiple threats, from bombs to hunger to preventable diseases like cholera.”

The already dire humanitarian situation is being exacerbated by the battle for the lifeline port of Hodeida, which is threatening what little aid is trickling into the country.

“Any disruption to food and fuel supplies coming through Hodeida port could cause starvation on an unprecedented scale,” said Save the Children.

Located on Yemen’s Red Sea coast, the port city of Hodeida is controlled by the rebels and blockaded by Saudi Arabia and its allies.

At a hospital in Abs, north of Hodeida, skeletal children cried as they were tended to and weighed by doctors and nurses, an AFP photographer reported.

Aid agencies have sounded the alarm over escalating violence between the Huthis and Saudi-led government alliance, which is now edging towards Hodeida after a UN attempt to bring warring parties to the negotiating table this month failed.

“The humanitarian situation is very fragile,” David Miliband, head of the New York-based International Rescue Committee, told AFP as he wrapped up a visit to Yemen on Wednesday.

“My takeaway in three days in Yemen is that the humanitarian imperative doesn’t just demand better flow of goods and better access for humanitarian workers,” said the former British foreign secretary.

“It also demands a ceasefire to allow the peace process to proceed.”

The World Food Programme last year said food had become a “weapon of war” in Yemen, where fighting, cholera and looming famine have created what the UN calls the world’s worst humanitarian crisis.

Having already identified four million children at risk of starvation, Save the Children said an extra one million could now face famine as the Hodeida battle escalates.

A total of 5.2 million children across Yemen are now at risk of starvation, the Britain-based charity said. 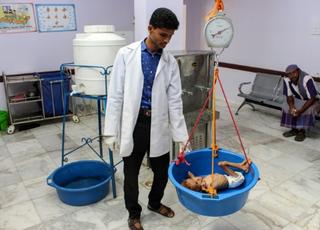 AFP / Essa Ahmed. A Yemeni child suffering from malnutrition is weighed at a hospital in the northern district of Abs in the northwestern Hajjah province on September 19, 2018.

“In one hospital I visited in north Yemen, the babies were too weak to cry, their bodies exhausted by hunger,” said Thorning-Schmidt.

Food prices in some parts of the country have doubled in just a few days, and the non-governmental organisation said families faced impossible choices on whether to pay to take a sick baby to hospital at the expense of feeding the rest of the family.

The United Nations this week said food prices were up a whopping 68 percent since 2015, when a regional military coalition led by Saudi Arabia joined the government’s war against the Huthi rebels.

The cost of a food basket, which contains pantry staples and canned goods, has increased by 35 percent and cooking gas and fuel prices by more than 25 percent in the past year, according to the UN humanitarian agency OCHA.

The UN has said any major fighting in Hodeida could halt food distributions to eight million Yemenis dependent on them for survival.

The country’s economy and population of 22 million people depend almost entirely on imports.

Deadly clashes resumed on Monday night around Hodeida after UN-sponsored talks collapsed in Geneva this month.

UN officials are now pushing to find a solution to the Hodeida fighting.

World Food Programme director David Beasley on Wednesday warned “time is running out” for aid groups to keep Yemen from “slipping into a devastating famine”.

“We cannot afford any disruption to the lifeline we are providing for the innocent victims of this conflict,” Beasley said.

The UN Yemen envoy Martin Griffiths was in Riyadh on Wednesday after a three-day visit to Yemen aimed at restarting negotiations between the government of President Abedrabbo Mansour Hadi and the Huthis.

The United Nations’ humanitarian coordinator for Yemen, Lise Grande, was also in Hodeida on Wednesday, according to a high-ranking Yemeni military source.

Nearly 10,000 people, mostly civilians, have been killed since the Saudi-led coalition intervened in the Yemen conflict in 2015.

Featured Photo: AFP / Essa Ahmed. Save the Children says disruption to supplies coming through Yemen’s embattled Hodeida port has put an extra one million children at risk of starvation, bringing the total to 5.2 million.