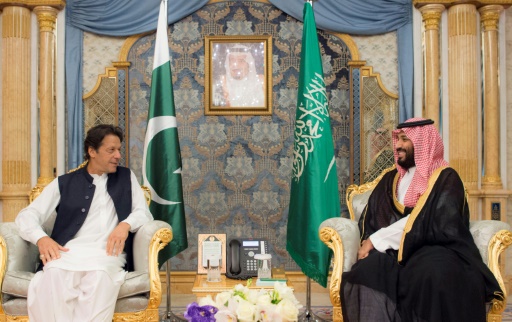 Islamabad (AFP) – Islamabad has invited Saudi Arabia to invest in the Beijing-funded, multi-billion dollar infrastructure corridor being constructed in Pakistan, its information minister said Thursday, as concerns grow over the country’s debt levels.

The China-Pakistan Economic Corridor (CPEC) is an ambitious plan to build energy and transport links connecting the western Chinese region of Xinjiang with the Arabian Sea via Pakistan, as part of Beijing’s broader Belt and Road initiative.

But the opaqueness of CPEC financing has led to concerns as Pakistan faces a looming balance-of-payments crisis, including fears about the country’s ability to repay Chinese loans.

Analysts say new prime minister Imran Khan’s government will need to take urgent action, potentially seeking a bailout from the International Monetary Fund (IMF), unless it can secure other funding.

“Saudi Arabia is the first country whom we have invited to join CPEC as third partner,” Information Minister Fawad Chaudhry told reporters in Islamabad after Khan’s maiden foreign trip to the oil-rich kingdom.

He said a Saudi delegation including the finance and energy ministers will visit Pakistan in the first week of October to lay the foundations for “big financial cooperation” between the two countries.

He did not gave further details of the new “partnership”, but said Saudi Arabia would have direct investments in major projects under the proposal.

“So now in CPEC, our third strategic partner and economic partner will be Saudi Arabia and by the grace of God huge investments will come from Saudi Arabia to Pakistan,” he said.

China’s massive “Belt and Road” initiative seeks to revive ancient trade routes through a massive rail and maritime network via $1 trillion in investments across Asia and Europe.

Pakistan has gone to the IMF repeatedly since the late 1980s.

The last time was in 2013, when Islamabad got a $6.6 billion loan to tackle a similar crisis.

Analysts have said this time that the new government will have to act quickly as the country teeters on the verge of a new balance-of-payments crisis which could threaten its currency and its ability to repay debts or pay for imports.

Its budget deficit has grown steadily over the past five years, from four percent to 10 percent of GDP.

As a result, its foreign currency reserves have declined to about $10.3 billion, covering less than two months of imports. The rupee has been devalued four times since December, fuelling inflation.