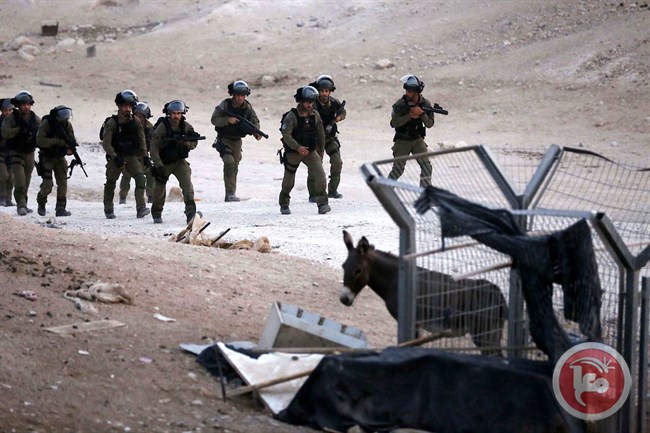 JERUSALEM (Ma’an) — The Israeli Civil Administration ordered on Sunday the Bedouin residents of Khan al-Ahmar village, east of Jerusalem, to demolish their homes and to evacuate the area before the start of October.

According to local sources, staff members of the Israeli Civil Administration under the protection of Israeli forces stormed Khan al-Ahmar and handed evacuation notices to the residents, ordering them to demolish their homes and evacuate the village within the given timeframe.

Sources said that Israeli forces threatened the residents in case of non-implementation of the notices, the Israeli army would demolish the village.

Sources added that large numbers of heavily armed Israeli forces stormed the village and surrounded the open sit-in tent, as well as took photos of the participants.

Earlier this month, the Israeli High Court rejected an appeal against the demolition of Khan al-Ahmar and ruled for its evacuation and demolition to take place, under the pretext of building without a difficult-to-obtain Israeli permit.

However, critics say that the displacement of the residents and the demolition of the village is as part of an Israeli plan to expand the nearby illegal Israeli settlement of Kfar Adummim.

The village is inhabited by about 200 Palestinians, 53% of whom are children and 95% of whom are refugees registered with the United Nations Relief and Works Agency (UNRWA).

A delegation of European parliamentarians for relations with Palestine visited Khan al-Ahmar earlier this week and warned that “The forceful transfer of people under occupation is a serious violation of the Fourth Geneva Convention and is considered a war crime.”

Although international humanitarian law prohibits the demolition of the village and illegal confiscation of private property, Israeli forces continue their planned expansion by forcing evictions and violating basic human rights of the people.

Israel has been constantly trying to uproot Bedouin communities from the east of Jerusalem area to allow settlement expansion in the area, which would later turn the entire eastern part of the West Bank into a settlement zone.

(AFP) – . . . Village residents vowed not to leave despite the notice.

“No one will leave. We will have to be expelled by force,” said village spokesman Eid Abu Khamis, adding that a residents’ meeting would be held later on the issue.

“If the Israeli army comes to demolish, it will only be by force.”

The village is located in a strategic spot east of Jerusalem, near Israeli settlements and along a road leading to the Dead Sea.

There have been warnings that continued settlement building in the area would eventually divide the West Bank in two, dealing a death blow to any remaining hopes of a two-state solution.

Israeli authorities have offered alternative sites for Khan al-Ahmar residents, but villagers say the first was near a rubbish dump and the latest close to a sewage treatment plant.