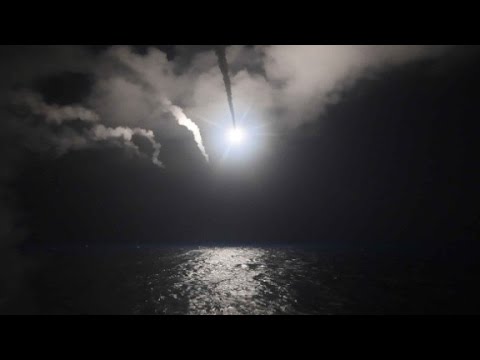 Ann Arbor (Informed Comment) – According to Bob Woodward’s just-released book, “Fear,” Donald Trump had been pressed to use 200 cruise missiles to destroy the Syrian Air Force in 2017. Knowing that the Russian Aerospace Forces personnel were all over Syrian air bases, Secretary of Defense Jim Mattis became alarmed, and shaped a limited response to the Syrian regime’s use of chemical weapons at Khan Sheikhoun on April 4, 2017.

In other words, if a maximalist attack had been launched, and large numbers of Russian soldiers had been killed, the two superpowers could well have headed for a deadly confrontation.

When Trump was shown pictures of the Khan Sheikhoun victims, he allegedly said of Syrian strongman Bashar al-Assad, “Let’s fucking kill him! Let’s kill the fucking lot of them.”

He ordered Mattis to wipe out the Syrian leadership. Mattis hung up the phone and then said, “We’re not going to do any of that.”

“The largest option was a 200-missile attack on all the major Syrian airfields. . . The potential target list was large. In 2013 when Obama had threatened a missile attack, he had approved a target list including a government compound housing the chemical weapons program.”

Hitting a government compound like that likewise had the potential to kill Russian military advisers.

The proponent of the huge attack on Syria that disregarded the possibility of Russian casualties was Derek Harvey, a former colonel in the US military who had been appointed to the National Security Council and served on the board of the Defense Intelligence Agency. Harvey knew how things worked.

Derek Harvey believed the US had been taking “half measures.” The middle option presented to Trump was to hit Syria with 60 Tomahawk missiles at the airfield from which the plans carrying poison gas had taken off.

“We have an opportunity to do more . . . and we have to think in terms of hitting multiple airfields . . . Take out their air power because that’s a force multiplier for the regime. We’re trying to shape the endgame and put more pressure on the regime to engage politically.” Harvey said they should “take out his air force– not 15 or 20 percent, let’s take out 80 percent of it.”

The Harvey plan would require 200 Tomahawk missiles. I’m not sure how a man of Harvey’s experience did not know that Russian advisers are all over the Syrian bases and would certainly be killed in such a massive and wideranging strike.

Mattis wanted to be careful. Action in any form was risky. Russian were working at the Syrian airfields; kill Russians, and they would have a whole new ball game, a confrontation or a catastrophe.”

Mattis reduced the plan to 59 Tomahawk missiles on one airbase. The secretary of defense even took off the target list a housing complex at the airbase, because civilian family members of the Syrian military might be living there.

At a later meeting Trump had become cautious, likely having been worked by Bannon, who opposed the strike. He asked, “What happens if a missile or missiles go off course? What happens if we hit a school? If we hit a hospital? Or a target we did not intend to hit? What was the possibility of killing civilians.”

The team of principals who met with Trump voted unanimously for the medium, 60-Tomahawk strike on the airbase. The Russians, Woodward said, were in just one compound there, and could be avoided. The US military even called the Russians 15 minutes before the strike to warn them. The man who picked up the phone appeared to be drunk.

Many of the people around Trump, and Trump himself, seem unaware of just how entangled Russian officers and soldiers are with the Syrian war effort. Mattis comes across as one of the few senior figures who was aware of the dangers of such attack, since it would deeply anger the Russian leadership.

You have a sense from the book that Trump could have sleepwalked right into WW III.

CNN from a year ago: “Trump orders military strike against Syria”