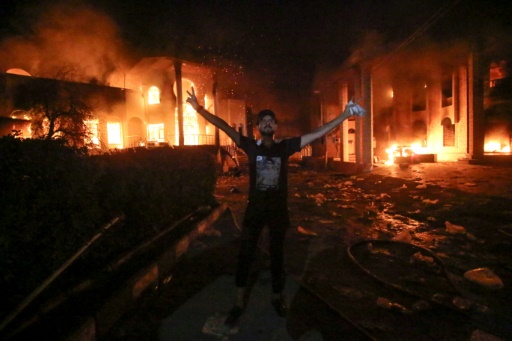 Basra (Iraq) (AFP) – Iraqi protesters on Friday torched the Iranian consulate in the southern city of Basra in fresh demonstrations over poor public services after parliament called for an emergency session on the unrest.

Unidentified attackers also fired shells into Baghdad’s fortified Green Zone in a rare attack on an area that houses parliament, government offices and the US embassy. There were no casualties.

Basra has seen a surge in protests since Tuesday, with demonstrators torching government buildings as well as political party and militia offices, as anger boils over after the hospitalisation of 30,000 people who had drunk polluted water.

At least nine demonstrators have been killed since then in clashes with security forces, Mehdi al-Tamimi, head of Basra’s human rights council, has said.

In a bid to quell the violence, Prime Minister Haider al-Abadi said late Friday that he had instructed security forces to “act decisively against the acts of vandalism that accompanied the demonstrations”.

Iraq’s Joint Operations Command, which includes the army and police, said in a statement there would be a “severe” response with “exceptional security measures”, including banning protests and group travel.

The wave of protests first broke out in July in oil-rich Basra province before spreading to other parts of the country, with demonstrators also condemning corruption among Iraqi officials and demanding jobs.

“We’re thirsty, we’re hungry, we are sick and abandoned,” protester Ali Hussein told AFP on Friday after another night of violence.

“Demonstrating is a sacred duty and all honest people ought to join.”

Thousands of demonstrators rallied outside the Iranian consulate on Friday while hundreds stormed the building and set it on fire, an AFP photographer said. 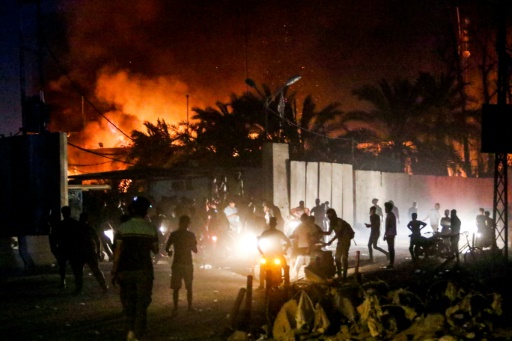 AFP / Haidar MOHAMMED ALI. Iraqi protesters gather outside the burning headquarters of the Iranian consulate in the southern city of Basra on September 7, 2018.

A spokesman for the consulate said that all diplomats and employees were evacuated from the building before the protesters attacked, and that none of them were hurt.

Iraq’s foreign ministry called the attack against the consulate “an unacceptable act undermining the interests of Iraq and its international relations”.

Iran is a key power broker in Iraq and many of the militias and political parties whose offices were torched Thursday are known to be close to the Islamic republic.

Parliament said that lawmakers and ministers, including Abadi, will meet on Saturday to discuss the water contamination crisis, the latest breakdown in public services to infuriate residents.

The meeting was demanded by populist Shiite cleric Moqtada Sadr, whose political bloc won the largest number of seats in May elections although a new government has yet to be formed. 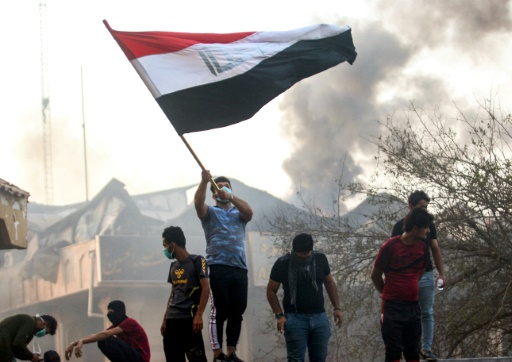 AFP / Haidar MOHAMMED ALI. An Iraqi protester waves a national flag while demonstrating outside the smouldering local government headquarters in the southern city of Basra on September 7, 2018.

Sadr, whose supporters held protests inside the Green Zone in 2016 to condemn corruption among Iraqi officials, called for “demonstrations of peaceful anger” in Basra after the main weekly Muslim prayers on Friday.

And the representative of Grand Ayatollah Ali Sistani, spiritual leader of Iraq’s Shiite majority, in his Friday sermon denounced “the bad behaviour of senior officials” and called for the next government to be “different from its predecessors”.

At least 24 people have been killed in the demonstrations since they erupted in Basra on July 8.

Human rights activists have accused the security forces of opening fire on the demonstrators.

But the government has blamed provocateurs in the crowds and said troops have been ordered not to use live rounds.

Amnesty International on Friday denounced “the use of excessive force by security forces” and called for an investigation into the deaths.

The anger on Basra’s streets was “in response to the government’s intentional policy of neglect” of the oil-rich region, the head of the region’s human rights council Tamimi said.

Abadi has scrambled to defuse the anger and authorities have already pledged a multi-billion dollar emergency plan to revive infrastructure and services in southern Iraq.

But Iraqis remain deeply sceptical as the country remains in a state of political limbo.

Sadr on Thursday called for politicians to present “radical and immediate” solutions at the emergency meeting of parliament or step down if they fail to do so.

Abadi, for his part, is trying to hold onto his post in the next government through forming an alliance with Sadr, a former militia chief who has called for Iraq to have greater political independence from both neighbouring Iran and the United States.

Featured Photo: “AFP / Haidar MOHAMMED ALI. An Iraqi protester stands flashing the victory gesture outside the burning headquarters of the Iranian consulate in the southern city of Basra on September 7, 2018 during demonstrations.