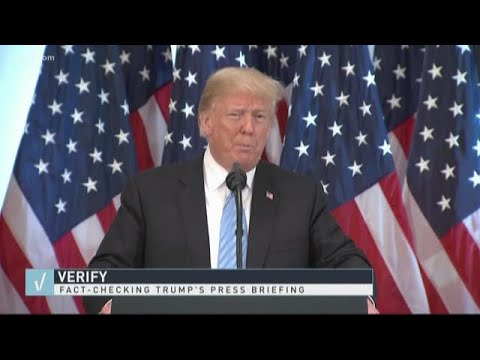 I plowed through the disturbed ramblings of Trump’s ‘very big brain’ for all the myriads of falsehoods that came out of his mouth Wednesday.

Trump poisoned the well of the Kavanaugh hearings by openly doubting the women accusers of his supreme court nominee (before hearing Christine Blasey Ford’s testimony today) and by dismissing the groundswell of accusations against him as a Democratic con job.

If a trial were going on and the president intervened so publicly and forcefully, it might well cause a mistrial.

On these grounds alone, the Kavanaugh appointment should be withdrawn.

And, here are a few other falsehoods from his bizarre press conference on Wednesday:

1. Trump said of his China tariffs:

“So we’re at $250 billion now, 25 percent interest. And a lot of money is coming into our coffers. And it’s had no impact on our — absolutely, by the way, no impact on our economy. Which I said it wouldn’t.”

But the CEO of Ford says that Trump’s metal tariffs will cost his company $1 bn. in profits this year! And Trump himself proposed a $12 bn bailout for midwestern soy bean farmers who are being devastated by Chinese counter-tariffs. That is just the tip of the iceberg with regard to the pain Trump’s trade war will bring over time to the US economy. He boasted that the US is now collecting 25% in import taxes (he said ‘interest) on Chinese imported goods. He doesn’t get that the consumer pays that tax and that he just raised Americans’ taxes indirectly by making them pay a quarter more for Chinese commodities.

2. Trump said of his so far veiled deal of the century for Palestinians and Israelis,

“So they asked me about that. I said, well, I think the two state will happen. I think we’re going to go down the two-state road, and I’m glad I got it out, and Jared [Kushner] — who is so involved, he loves Israel. He loves Israel, but he’s also going to be very fair with the Palestinians.”

Jared Kushner has pushed for defunding the United Nations Relief and Works Agency, on which millions of Palestinians depend for educating and feeding their children. Kushner is attempting to erase Palestinian refugees from the discourse and forestall any demand to return to their homes in what is now Israel. Indeed, Kushner is trying to cover up the fact that large numbers of Palestinians are stateless and have no prospect of gaining citizenship in a state in the near to medium future.

3. Trump maintains that the Obama administration and former secretary of state John Kerry exacerbated the Yemen war by not including Yemen in the Joint Comprehensive Plan of Action or Nuclear Deal on Iran.

Fact, the Yemen war is a local struggle for power created by the vacuum left by the fall of the government of Ali Abdullah Saleh. The war is being prosecuted brutally by Trump’s friends, the Saudis and the United Arab Emirates. Iran may have provided small amounts of money to the Houth rebels but the blockade of Hodeida port tells against them getting very much weaponry through. The JCPOA had nothing to do with Yemen, and Iran couldn’t make the Houthi Zaydis stand down if it wanted to.

Besides, Trump’s main response to the Yemen war is to give logistical and strategic help to Saudi Arabia, and to ban Yemenis from coming into the US. The Saudis are pursuing a dirty war with many casualties and Trump is helping them do this and there is no peace process,

4. Trump tried to take credit for the Idlib deal that forestalled an assault on the rebels, one of them affiliated with al-Qaeda.

“I put out on social media and elsewhere, I gave Mike Pompeo, John Bolton, everybody these orders, don’t let it happen. I said, don’t let it happen. That doesn’t mean they can’t be selective, they can’t be — you know, go in. They’ve got to do what they’ve got to do with terrorists. I assume they’re terrorists, but don’t kill millions of people, and it stopped. You saw that. Nobody is going to give me credit, but that’s okay. That’s okay, because the people know. I have had more Syrians thank me for that. This was about four weeks ago I put that out. I said, they’re surrounding a city of three million people, they’re going to start bombing don’t let it happen.

And I meant it, too. I meant it. Millions of people have been saved, and I gave today great credit to Iran — I don’t know if you heard that. I gave great credit to Iran, to Russia and to Syria for not doing it. Now I hope it is going to be surgical, meaning go in and do what’s — it’s lengthy and everything else, and they possibly have to do it, but I think millions of people would have been killed and that would have been a shame. Hopefully — and I have to tell you Turkey has been a big help. Turkey has been great. Turkey has helped us very much with that whole situation.”

Trump didn’t have anything to do with delaying the Syrian government assault on Idlib. Turkey took the lead in promising Russia that if the assault were postponed, Ankara could disband and expel the fighters there from what used to be called the Nusra Front, who have a history of affiliation with al-Qaeda. Trump wasn’t part of the meetings, and indeed was conspicuous in his absence.

Trump told one lie after another– that his trade war with China had no negative effect domestically. That he cares about Yemenis. That the Houthi rebels in Yemen are solely a puppet of Iran. That he forestalled the planned assault on Idlib in Syria.

I don’t think it is realized the full impacts Trump’s falsehoods on America’s standing in the world. Trump could have a crisis like the Gulf War. George H. W. Bush handled the Kuwait crisis by working the phones and getting the major other powers to come together to face the aggression of Iraq’s Saddam Hussein. Bush senior put together a global force of 750,000 to confront Iraq’s ‘million-man army.’

Trump today could not do that. People would laugh at him. Literally.