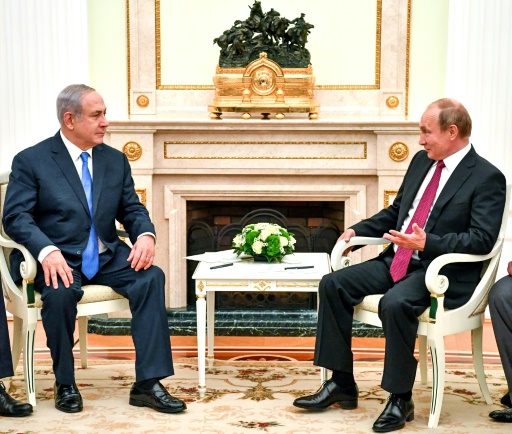 Paris (AFP) – From a honeymoon in the years after Israel’s founding, to strained ties after the mistaken downing of a Russian plane in Syria, relations between Israel and Russia have gone through several periods of tensions.

These have mainly revolved around disagreements on Middle Eastern issues.

– One of the first to recognise Israel –

In November 1947 the Soviet Union’s government accepts the plan to split Palestine into two states, one Jewish, the other Arab.

It becomes one of the first countries to recognise the State of Israel after its creation in May 1948.

In May 1949 Moscow votes in favour of Israel’s admission to the United Nations.

In May 1967, the Soviet Union breaks off relations with Israel during the Arab-Israeli war.

Moscow goes on to arm and fund Arab countries for several decades.

A rapprochement starts in August 1986, with a first official contact in Helsinki between Israeli and Soviet consular delegations.

In October 1991, Mikhail Gorbachev reestablishes diplomatic relations, two months before the collapse of the Soviet Union.

He authorises Jews to emigrate freely. Over a decade more than one million of them emigrate to Israel.

In April 1994, the official visit of Israeli Prime Minister Yitzhak Rabin to Moscow, the first by an Israeli head of government, enshrines the full normalisation of bilateral relations.

In September 2001, Israeli prime minister Ariel Sharon and Russian President Vladimir Putin jointly in Moscow condemn “terrorism”, of which both countries say they are victims.

The positions of the Kremlin and the Israelis have come closer since the Russian offensive in its separatist republic of Chechnya, where Moscow says it is fighting terrorism.

Sharon, for his part, says the violence of the intifada, or Palestinian uprising, amounts to a terrorist campaign.

In April 2005, Putin makes an historic visit to Israel, against the background of a disagreement over Moscow’s sale of anti-aircraft missiles to Syria.

In June 2008, Russian giant Gazprom says it is examining possible deliveries of gas to Israel.

In September 2010, the Russian and Israeli defence ministers sign in Moscow an accord on military cooperation. This cooperation had already manifested itself in 2009 in the sale to Russia of Israeli drones.

Contacts have since been stepped up, with Putin and Israeli Prime Minister Benjamin Netanyahu meeting three times since the beginning of 2018.

In September 2015 Netanyahu meets Putin in Moscow. The Israeli government says the two countries have agreed on a mechanism to coordinate their military action in war-torn Syria, so as to avoid “misunderstandings” between their forces.

On September 30, the Russian air force launches a campaign of air strikes in support of Syrian President Bashar al-Assad, whose forces are struggling against rebels.

In October Russia says a hotline had been set up with Israel to ensure there will be no clashes between their air forces.

Israel, which intends to keep its distance from the Syrian conflict, while defending its interests, has since 2013 regularly carried out strikes against the Syrian government, its Lebanese ally Hezbollah and Iranian targets.

On September 17, 2018 Syrian air defences down by error a Russian Ilyushin Il-20 military plane over the Mediterranean, killing all 15 crew members, as Israel is carrying out a raid on a Syrian army facility.

A day later during a telephone call, Netanyahu expresses to Putin his “sorrow” at the downing. Putin says it was the result of “tragic accidental circumstances”.

On Sunday, Russia’s military blames “misleading” information from the Israeli air force for the incident.

A day later, Moscow says it plans to supply the Syrian army with a new S-300 air defence system and jam radars of nearby warplanes.

Putin tells Netanyahu he rejects the Israeli version, blaming “the actions by the Israeli air force”.

Netanyahu says he is confident of the Israeli account and warns Putin against “transferring advanced weapons systems” to Syria.