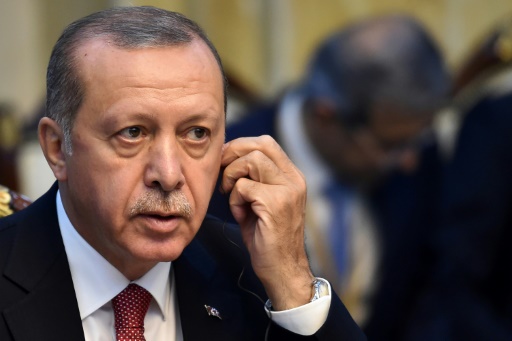 Bishkek (Kyrgyzstan) (AFP) – Turkish President Recep Tayyip Erdogan on Sunday vowed Ankara would pursue non-dollar transactions in trade with Russia and other countries, accusing the US of behaving like “wild wolves.”

Both Turkey and Russia are reeling from punitive economic measures imposed by Washington.

“America behaves like wild wolves. Don’t believe them,” Erdogan told a business forum during a visit to Kyrgyzstan, in comments translated into Kyrgyz.

He said his country was in negotiations with Russia over non-dollar trade.

“Using the dollar only damages us. We will not give up. We will be victorious,” Erdogan told the meeting, attended by Kyrgyz and Turkish businessmen as well as government officials.

Ties between NATO members Washington and Ankara hit a new low last month as US President Donald Trump announced steep new tariffs on Turkish steel and aluminium in response to the detention of an American pastor in Turkey.

The Turkish lira shed a quarter of its value last month as the trade war with the US ratcheted up.

Russia meanwhile saw its ruble tumble to two-year lows in August after the US announced fresh sanctions in connection with a nerve agent poisoning incident in the British city of Salisbury.

Erdogan has also used the visit to ex-Soviet Kyrgyzstan to demand the Central Asian country of six million people relinquish all ties to Fethullah Gulen, a US-based cleric and educator Ankara accuses of fomenting a coup in 2016.

Speaking Sunday, Erdogan said Turkish businesses should invest in Kyrgyzstan but “may face barriers from FETO,” the term Ankara uses to describe the network of people and institutions linked to Gulen.

The refusal of the United States to extradite 77-year-old Gulen to face trial in Turkey is one of several sore points that have plagued a once-strong bilateral relationship.

Gulen, whose Hizmet movement has led to the creation of schools in dozens of countries including Kyrgyzstan has always denied any links to the 2016 coup attempt.

Since July 2016, over 55,000 people have been arrested over coup links in Turkey, while more than 140,000 public sector employees have been sacked or suspended.