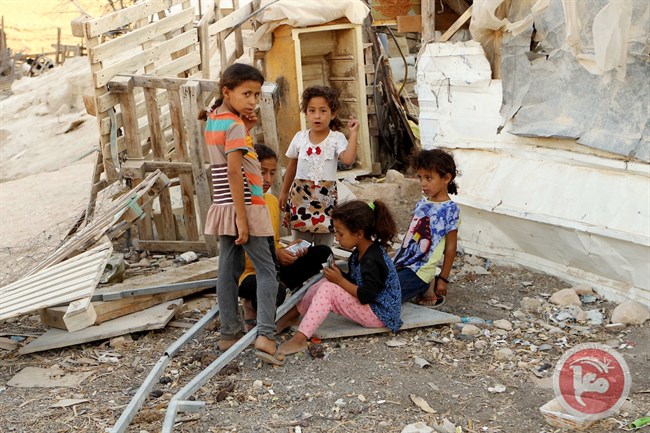 BETHLEHEM (Ma’an) — Amnesty International said, on Tuesday, that the demolition of the Bedouin village of Khan al-Ahmar, east of occupied Jerusalem, and the displacement of its residents by Israeli forces as part of an illegal Israeli settlement expansion plan is a “war crime.”

Saleh Higazi, Amnesty International’s Middle East and North Africa Deputy Director, denounced Israel’s planned demolition of Khan al-Ahmar and stressed that “this act is not only heartless and discriminatory, it is illegal.”

The demolition of the village would displace 181 residents, 53% of whom are children and 95% of whom are refugees registered with the United Nations Relief and Works Agency (UNRWA).

In September, the Israeli High Court rejected an appeal against the demolition of the village and ruled for its evacuation and demolition to take place, granting the residents an evacuation period until October 1st.

The Israeli High Court ruled for the demolition on the basis of Khan al-Ahmar lacking almost impossible-to-obtain Israeli building permits, which the United Nations has said results from the discriminatory zoning and planning regimes implemented in Area C — the more than 60 percent of the occupied West Bank under full Israeli control.

The Oslo agreements in 1995 between the Palestine Liberation Organization (PLO) and Israeli authorities divided the West Bank into three sections: areas A, B, and C. Area A, comprising the populated Palestinian cities and making up 18 percent of the West Bank, would be controlled by the newly formed PA, while Area B remained under Israeli army control with the PA controlling civil affairs.

Area C, the majority of the West Bank, however, was placed under full Israeli military control and contains the majority of natural resources and open spaces in the Palestinian territory. The Israeli-controlled land was expected to be gradually transferred to the PA over a five-year period, according to the Oslo agreements.

Yet, almost two decades later, the land has remained under Israeli control.

Area C, along with East Jerusalem — considered the capital of any future Palestinian state as part of a two-state solution — has been the site of rapid Israeli settlement expansions, while Israel’s separation wall has further divided Palestinian communities and has restricted Palestinians in the West Bank and the Gaza Strip from even visiting what was intended to be their capital.

On Monday, Amnesty International along with Jewish Voice for Peace, launched a social media campaign, targeting the Coordinator of Government Activities in the Territories, an Israeli Defense Ministry unit responsible for implementing government policy in Area C.

The campaign stated “Israel’s policies of settling Israeli civilians in the Occupied Palestinian Territories, wantonly destroying property and forcibly transferring Palestinians living under occupation, violate the Fourth Geneva Convention and are war crimes listed in the statute of the International Criminal Court.”

It added that since 1967, Israel has forcibly evicted and displaced entire communities and demolished more than 50,000 Palestinian homes and structures.

Amnesty International said “After nearly a decade of trying to fight the injustice of this demolition, the residents of Khan al-Ahmar now approach the devastating day when they will see their home of generations torn down before their eyes.”

It stressed that “the forcible transfer of the Khan al-Ahmar amounts to a war crime,” noting “Israel must end its policy of destroying Palestinians’ homes and livelihoods to make way for settlements.”