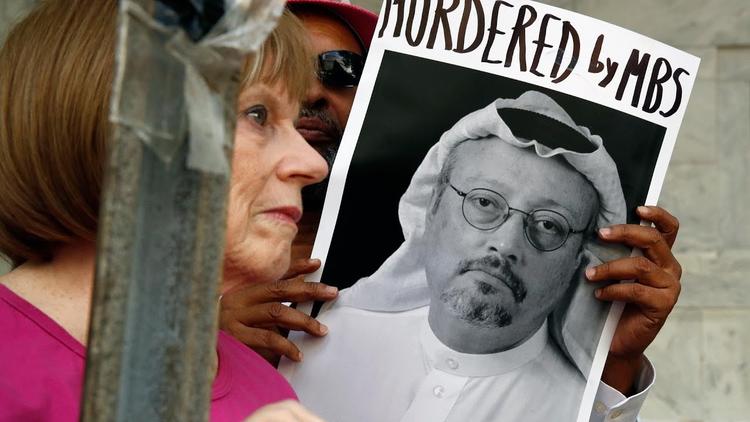 The world wants to know: #WhereisJamal

Human Rights Watch (Beirut) – Saudi Crown Prince Mohammad bin Salman should immediately release all evidence and information Saudi Arabia holds regarding the status of the prominent Saudi journalist Jamal Khashoggi, Human Rights Watch said today. Khashoggi, 59, entered the Saudi consulate in Istanbul on October 2, 2018, and has not been seen or heard from since. Saudi Arabia has denied involvement in Khashoggi’s disappearance, claiming he left the consulate alone shortly after his arrival, but has produced no evidence to support the claim.

On October 7, Yasin Aktay, an adviser to President Recep Tayyip Erdoğan of Turkey, told Reuters he believed that Khashoggi had been murdered inside the consulate, and that a group of 15 Saudi men were “most certainly involved.” On October 9, The Washington Post reported that US intelligence officials had intercepted Saudi communications revealing a plot to capture Khashoggi.

“There is a mountain of evidence implicating Saudi Arabia in the enforced disappearance and potential murder of Jamal Khashoggi, and as the days go by, Saudi Arabia’s fact-free denials are becoming indictments in and of themselves,” said Sarah Leah Whitson, Middle East director at Human Rights Watch. “If Saudi Arabia is responsible for Khashoggi’s disappearance and possible murder, the United States, United Kingdom, European Union, and other Saudi allies need to fundamentally reconsider their relationship with a leadership whose behavior resembles that of a rogue regime.”

Khashoggi’s fiancé, a Turkish national, told media outlets that Khashoggi entered the Saudi consulate in Istanbul on the afternoon of October 2 to obtain documents necessary for their marriage, and that he left her his phones and instructions to alert the authorities if he did not return after two hours. That was the last time his fiancé saw him.

Mohammad bin Salman denied that Saudi Arabia had captured Khashoggi in an interview with Bloomberg on October 5, claiming “[i]f he’s in Saudi Arabia I would know that,” and the Saudi ambassador to the US, Prince Khalid bin Salman, the crown prince’s brother, described all the allegations as “baseless” and “absolutely false.” Saudi officials, however, have produced no evidence that Khashoggi ever left the embassy, and Khalid bin Salman told The Washington Post that the consulate’s security cameras “were not recording” on October 2.

Turkish officials, however, have outlined to The Washington Post what appears to be a coordinated Saudi plan to target Khashoggi. Citing flight records and Turkish officials familiar with the investigation, the Post described how two private planes carrying 15 people arrived in Istanbul from Riyadh on October 2, and that men from one of the planes traveled to the consulate. They later allegedly left in a black van for the consular general’s residence, about two hours after Khashoggi entered the consulate. Both planes departed later that evening, one bound for Cairo and the other for Dubai, then both returned to Riyadh the following day. Turkish officials told media outlets that the Turkish staff at the consulate were ordered to take a holiday on October 2.

The Daily Sabah, a Turkish pro-government newspaper, on October 10 published the names and photos of the 15 Saudi men whom Turkish investigators claim are involved in the plot. One of the men is identified as a forensics expert.

Khashoggi’s disappearance has provoked messages of concern from US Vice President Mike Pence, US President Donald Trump, prominent US senators, and UK Foreign Minister Jeremy Hunt, as well as calls for Saudi investigations by US Secretary of State Mike Pompeo and the high representative of the European Union for foreign affairs and security policy, Federica Mogherini. Few of these statements indicate a potential for serious consequences if the alleged murder is proven true.

The targeting of Khashoggi by Saudi agents at the Saudi consulate in Istanbul is a flagrant violation of the Vienna Convention on Consular Relations of 1963. Article 55.2 of the convention holds that “[t]he consular premises shall not be used in any manner incompatible with the exercise of consular functions.” The convention also states that diplomatic immunity can be annulled in cases of a “grave crime” upon the decision of a competent court (art. 41).

In September 2017, Saudi Arabia arrested dozens of dissidents, writers, and clerics. Activists have circulated lists of more than 60 people being held, and Saudi authorities began bringing them to trial in September 2018, largely on charges related to their peaceful opinions and expression as well as political affiliations.

Authorities are seeking the death penalty against several, including a prominent cleric, Salman al-Awda, who is facing 37 charges based on his alleged ties to the Qatari government and to the Muslim Brotherhood, which Saudi Arabia classifies as a terrorist organization. A Saudi economist, Essam al-Zamil, is also facing the death penalty apparently merely for calling into question the official economic forecasts around the proposed Saudi Aramco Initial Public Offering.

In May, Saudi Arabia began a sweeping crackdown on women’s rights activists, arresting at least 13 women under the pretext of maintaining national security. Nine of the women remain in detention.

Saudi authorities have also targeted Saudi citizens abroad in recent months, including directing the kidnapping of a prominent women’s rights advocate, Loujain al-Hathloul, from the United Arab Emirates and her husband Fahad al-Butairi from Jordan in March 2018, forcibly returning both to Saudi Arabia.

As the Saudi defense minister, Mohammad bin Salman oversees all Saudi military forces. Saudi Arabia leads the coalition that began military operations in Yemen in March 2015. The coalition has committed numerous violations of international humanitarian law, including likely war crimes, and has failed to carry out credible investigations into alleged violations or to provide civilian victims redress.

Countries should end arms sales to Saudi Arabia, Human Rights Watch said. UN Security Council members should impose targeted sanctions on Mohammad bin Salman and other senior coalition commanders substantially responsible for widespread violations of the laws of war who have not taken serious steps to end abuses, in accordance with UN Security Council Resolutions 2140 and 2216 on Yemen. And Saudi Arabia should be removed from the UN Human Rights Council for engaging in “gross and systematic violations of human rights.”

“Given that Saudi Arabia will not provide any evidence about Khashoggi’s movements in and out of the consulate, they cannot be trusted to conduct a genuine – far less effective – investigation,” Whitson said. “Saudi Arabia’s goal is fact obscuring, not fact finding, and they should be made to face serious consequences.”

CBC: “What happened to Jamal Khashoggi? | The Investigators with Diana Swain”