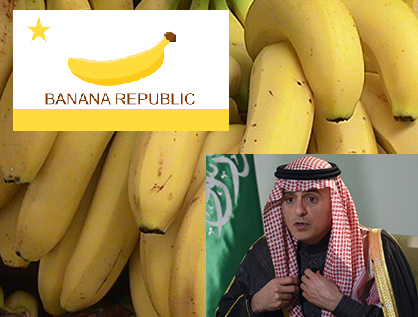 Stockholm ( MENA Tidningen) – The Saudis are feeling offended that another country might criticize their dismal record of human rights. Last August Canada’s Foreign Minister Chrystia Freeland tweeted that a Canadian citizen, Raif Badawi, and his sister Samar should be released from a Saudi prison. Their arrest was due to their promotion of human rights, a clear wrong in the Wahhabi mindset of the royal clan, but something that even the United Nations condemns. So last week the Saudi foreign minister (not a woman, to be sure) retorted “What are we, a banana republic?”

In fact there is a Saudi Banana Republic with stores in Jeddah, Dhahran and Riyadh, but I suspect Foreign Minister Adel Jubeir does not buy his robes there. And, yes, the Saudis do grow some bananas. In 2005 the Mexican government offered to assist the kingdom in growing better bananas. They may have made a faux-pas in noting that the bananas in the New World originally came from Yemen. It seems that Saudis love bananas, as they consumed 40-50 million cartons worth about 200 million euros in 2016. That year the price of imported bananas rose by 40% in Saudi Arabia. The only Middle East country that imports more bananas is the United Arab Emirates. Thus, the two leaders of the Saudi-led coalition waging war on Yemen are high on bananas, while the people of Yemen approach famine.

I have to agree with the Saudi Foreign Minister that Saudi Arabia could not possibly be a Banana Republic. First of all, it is not a republic, but a kingdom with a royal family that controls all the resources and lops off the heads of anyone who opposes them. Secondly, they produce very few bananas but a lot of dates. Until there is a revolution that brings a real republic, they cannot even be called a Date Republic.

Let’s be clear. In Saudi Arabia a call for human rights, especially women’s rights, is considered terrorism, alongside the Islamic State, al-Qaeda and the Muslim Brotherhood. Here is the assessment of Human Rights Watch:

“The authorities severely restricted freedoms of expression, association and assembly. Many human rights defenders and critics were detained and some were sentenced to lengthy prison terms after unfair trials. Several Shi’a activists were executed, and many more were sentenced to death following grossly unfair trials before the Specialized Criminal Court (SCC). Torture and other ill-treatment of detainees remained common. Despite limited reforms, women faced systemic discrimination in law and practice and were inadequately protected against sexual and other violence. The authorities used the death penalty extensively, carrying out scores of executions. The Saudi-led coalition continued to commit serious violations of international law in Yemen.”

Much attention was given to Crown Prince Bin Salman’s benevolent “reform” allowing Saudi women to drive cars. I suspect it made all the Saudi car salesmen happy. But at the same time Saudi women who dared voice an opinion about the need for women’s rights in this patriarchal Xanadu were silenced or arrested. One of these was Professor Hatoon Al-Fassi, a former colleague of mine when I taught at Qatar University. As noted in a September, 2018 letter from the American Historical Association to Saudi King Salman, there is no information on her whereabouts, current status or charges against her.

Let’s stop kidding ourselves. This is 2018 and Saudi Arabia maintains a medieval kingdom backed by an oil wealth that allows them to buy billions of dollars worth of weapons and positive publicity, not to mention bananas from real republics. Over the years they have exported an intolerant, fundamentalist, sectarian version of Islam that has torn apart the Islamic world and fostered a political maelstrom regarding who speaks for Islam: the Saudi Kings or the Iranian Ayatollahs. President Trump, easily impressed by tyrants, chose Saudi Arabia as the first Middle Eastern country to visit. And much of the rest of the world is either too afraid to speak out or complicit in supporting this inhumane regime.