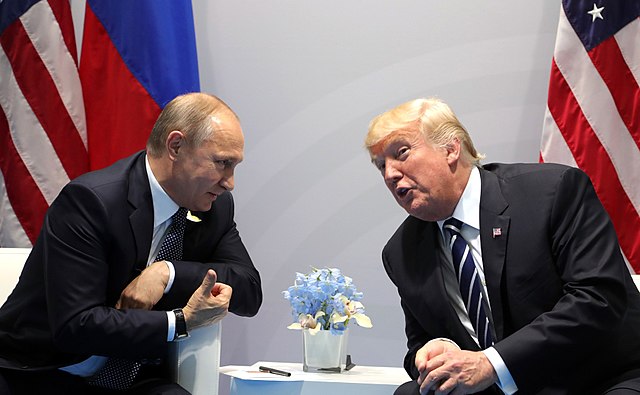 In the aftermath of Brett Kavanaugh being sworn in as the new Supreme Court justice, the controversies rage on. One troubling aspect of Kavanaugh is his support of extensive presidential powers. According to CNN, he had written in 2013 that “it’s a ‘traditional exercise’ of presidential power to ignore laws the White House views as unconstitutional” regarding George W. Bush’s presidential statements.

The U.S., then, is facing the real possibility of a Supreme Court failing to fulfill its duty to check the president’s power. If the subservient Republicans remain a majority in Congress after midterms, the “checks and balances” system may become obsolete. Instead, the president may consolidate power as did his role model Vladimir Putin in Russia.

What is Putin’s Russia really like? In the circa 2011* report “What 10 Years of Putin Have Brought,” Vladimir Milov and Boris Nemtsov track nine aspects of this authoritarian regime that have eerie parallels to the current U.S. situation. First, “Corruption is Eating Russia Up.” Many of Putin’s friends have become billionaires in the past decade. Like Trump’s friends, these Russian oligarchs are building their fortunes on the backs of the citizenry. By merging government functions with business profits, civil servants are also making a fortune. One Russian police official in charge of fighting organized crime, for example, was arrested in 2011 after reaping in $40 million and living in a 50-room mansion. Although Trump’s cronies have not made such an outrageous profit, at least seven out of his 24 Cabinet officials have allegedly abused their offices for profit.

Both Putin and Trump have also boldly used nepotism to ensure loyalty. Putin has appointed his daughter and his friends’ relatives to high positions that are beyond their skill levels. Although President Kennedy had appointed his brother to be the Attorney General, at least his brother had a law degree and the proper qualifications. Trump’s appointments of “the First Daughter” and others have jeopardized the proper functions of government because of their incompetence.

In an earlier report, Nemtsov writes that “Corruption has ceased being a problem in Russia; it has become a system.” In 2011, around a quarter of Russia’s economy was related to corruption to the tune of $300 billion. Russia now ranks as 156 on the Transparency International index that reports on corruption (the U.S. ranks 16, but that may change during Trump’s presidency). Fortunately, the U.S. has not reached this crisis point of corruption. The Democrats’ lawsuit based on the Emoluments Clause of the Constitution, for example, is moving through the court system. The lawsuit claims that Trump has been profiting from foreign governments when the dignitaries stay at the D.C. Trump Hotel.

Besides corruption, another parallel between the two countries is the health status of the citizens. Milov and Nemtsov write that “The Country is Dying Out” in their analysis of the grim mortality rates. In Russia, alcoholism and drug abuse are to blame for its “supermortality” problem; in the U.S., the opioid epidemic is partly responsible for the shorter life span reported by the CDC. Another comparison is between the public health systems, systems which are underfunded and overstretched. In the U.S., the Republicans’ goal to undermine the Affordable Care Act would only aggravate the problem.

Infrastructure, especially the roads, is another neglected area for the Putin and Trump governments. In Russia, the roads are in such bad shape that they are holding back economic development. Corruption adds to the costs of building and maintaining infrastructure. In the U.S., Trump has recently promised $1.5 trillion in infrastructure spending. Critics, though, are doubtful if anything significant could be accomplished. In the meantime, TRIP (a transportation research group) asserts 44% of America’s major roads are in such disrepair that it “costs U.S. motorists $130 billion a year in extra vehicle repairs and operating costs – $599 per motorist.”

Lastly, the Russian experience is one of “screaming inequality.” Social divisions have become gaping chasms under Putin’s system of monopolies, which often makes it impossible for small businesses to succeed. In the U.S., the economic disparities have also become obvious as the wage gap, student loans, and other factors have diminished the American Dream.

The good news is that it is not inevitable that the U.S. should become a reflection of Putin’s Russia. In his recent book The Common Good, Robert Reich writes that “Truth itself is a common good.” The first step to fighting injustice, then, is to claim the truth: Putin’s Russia is a harsh place for anybody who is not an oligarch, and the U.S. must do everything it can to avoid that fate.

*An earlier version of this essay incorrectly dated this report to 2018. Informed Comment regrets the error.