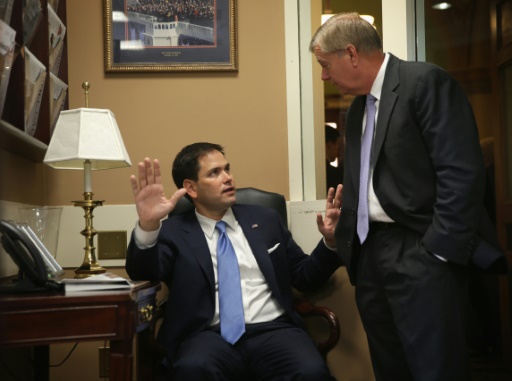 Washington (AFP) – An influential US Senate ally of President Donald Trump pledged Tuesday that Congress would take decisive action against Saudi Arabia over a missing writer, calling for the ouster of Crown Prince Mohammed bin Salman.

“This guy is a wrecking ball. He had this guy murdered in a consulate in Turkey,” Republican Senator Lindsey Graham told “Fox and Friends,” one of the president’s favorite news broadcasts.

Graham, discussing the feared killing of Saudi journalist and US resident Jamal Khashoggi, a critic of the monarchy, was backed by Marco Rubio, another of the top Republicans in the upper house, who described the crown prince as “young and aggressive.”

On Monday after speaking by telephone with King Salman, Trump was far less direct, suggesting that the October 2 disappearance of Khashoggi, who had been working with The Washington Post, could have been at the hands of “rogue killers.”

The US president said Tuesday he had spoken with Saudi Crown Prince Mohammed bin Salman and been assured that a “full” probe into the disappearance was underway.

But Graham, who has recently ingratiated himself with Trump, launched a tirade against Riyadh.

“I was on the (Senate) floor every time defending Saudi Arabia because they’re a good ally,” Graham told Fox.

“There is a difference between a country and an individual,” he added. “The MBS figure is to me toxic. He can never be a world leader on the world stage.”

Graham added that he felt “personally offended” by the kingdom’s leadership.

“They have nothing but contempt for us. Why would you put a guy like me and the president in this box after all the president has done?” Graham fumed. “This guy has got to go.”

As for the steps Trump should take, Graham said it was “up to the president” but pledged that Congress would “sanction the hell out of Saudi Arabia.”

Rubio swatted away Trump’s reservations about sanctions that might freeze tens of billions of dollars worth of Saudi arms sales.

“There are other countries we could sell that to,” Rubio told CNN.

“I don’t care how much money it is, there isn’t enough money in the world to purchase back our credibility on human rights and the way nations should conduct themselves,” he added.

“This is a fear we’ve had for a long time… that the crown prince is a young and aggressive guy that would overestimate how much room he had to do things.”

Congress “will act” in a way that will likely alter the US-Saudi relationship for the foreseeable future, Rubio asserted.

“What those specific measures are obviously is going to be up for debate, but they will be strong and meaningful,” he added, saying he expected the administration would “follow suit.”

Dianne Feinstein, a Democrat from California, meanwhile vowed to “not vote to support any arms sale to Saudi Arabia at this time, nor will I support US assistance for the Saudi-led war in Yemen.”

“The United States must send a message that this killing will not go unpunished,” she said in a statement.

Any initiative taken by the US Congress would have to wait until the November 6 elections, however, as both chambers are on recess until then.

Last week, top senators including Rubio and Graham sent a letter compelling the White House to report to Congress within 120 days with a determination about whether human rights abuses had occurred, and whether sanctions should be applied.

Congress has the power to temporarily block major arms deals, and several senators signaled they would consider doing so.