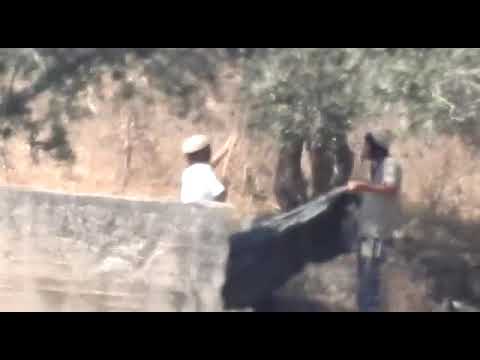 Palestinian farmers are only given four days to tend to hundreds of trees and harvest their crops, while settlers are free to access the land at their will

A group of settlers have been filmed stealing olives from Palestinian farms near the occupied West Bank city of Nablus.

In the video, the pair can be seen working together to cut and bag the olives from the groves which lie in an area which leaves them inaccessible to their Palestinian owners without Israeli permission.

According to Israeli human rights NGO Yesh Din incidents like these are repeated every year. Last year thousands of kilogrammes of olive crops were stolen by settlers in the Nablus area, the group said.

The farms are located in “Area C” of the West Bank which, under the terms of the 1993 Oslo Accords, means they fall completely under Israeli military and administrative control. Palestinians in this area often find their right to movement curtailed to make way for new illegal settlements, settlement roads and military training exercises. In some cases, Palestinians are forcibly removed to allow for settlement expansion as is the case with the residents of the Bedouin village of Khan Al-Ahmar which is currently under threat of demolition.

Speaking to MEMO, a Palestinian farmer, who asked not to be named, said occupation forces gave him only three to four days to harvest and care for his crop.

His farm is surrounded by illegal settlements leaving him unable to access it without direct coordination with occupation forces who must be present when he is harvesting his plants. Should he enter his land in the absence of Israeli occupation forces, the farmer is likely to be attacked by settlers who throw stones at him.

We go as a family as early as 6:00 in the morning and finish by Asr prayer [late afternoon]. Last year they gave us three days, one time the soldiers were late in the morning, one time they made us leave by noon. We did not manage to finish picking our olives, we tried to go after but they kicked us out. We later saw the settlers picking our olives, it’s so hard for me and my family to witness that and be helpless.

Occupation forces have a list of the names of landowners and only allow their close family members to accompany them to access the land. This year, access to the land has only been granted on Saturdays for a period of four weeks. This, the farmer says, allows settlers to steal the crops. He says he has reported the thefts to the occupation’s police forces who said the days in which Palestinians are allowed access to their land are over and so they will not take action against the settlers.

“A farmer prefers to work hard and at once, it’s better for the trees, if they give me a day a week, that means they are giving the rest of the week to the settlers.”

It’s hard to keep track of the thefts, they must be thousands of kilogrammes of olives every year, they have access to our land all year round.

Olives are a key source of income for approximately 100,000 Palestinian families who rely on the nearly 11 million olive trees in occupied Palestine for their livelihood. The olive oil industry alone makes up 20 per cent of the Palestinian economy.