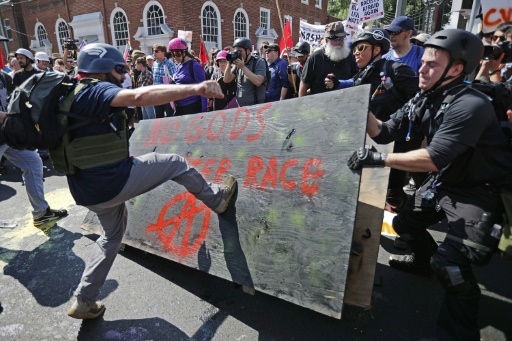 People often believe that terrorism is the weapon of the weak.

In other words, terrorism is practiced by marginalized groups that cannot influence government’s policies through legitimate means. However, developments on the violent far right since the victory of Donald Trump, I’d argue, present a different reality.

The attack at Pittsburgh’s Tree of Life Synagogue, as well as the sending of pipe bombs to critics of the current administration are just the latest examples of the consistent increase in the violence on the margins of the political camp currently controlling all branches of government. Because these acts were perpetrated by individuals with clear political agendas, I’d call them terrorism. While neither of these men were part of a named terrorist organization, and the synogogue shooting is being investigated as a hate crime, I’d argue that they are part of a virtual community that supported their political worldview.

The nonprofit Anti-Defamation League found that anti-Semitic incidents in the U.S. rose by 57 percent in 2017, the largest single year increase since it started recording such statistics. My own data set documents all far-right violent incidents since 1970 – not just anti-Semitic ones – and was first published in 2012. It reveals that in 2017 the United States experienced a 70 percent increase in violent attacks perpetrated in the name of far-right ideology.

Could a victory at the ballot box actually facilitate violence? Examples from other countries indicate that this may not be such a rare phenomenon. The two most brutal terrorist groups which emerged from the settlers’ movement in Israel – the Jewish Underground in the early 1980s and the Bat-Ayin Group in the early 2000s, operated in times when right-wing governing coalitions dominated the Israeli political system. Both groups were engaged in a campaign of violence against Palestinian civilians in the West Bank in order to undermine any policies designed to promote conciliation between the two sides.

Similarly, the electoral successes of European far-right parties in recent years, especially in local elections, were followed by increasing activity of related violent far-right groups and movements. The success of the AfD in Germany since 2016 was followed by acts of violence which were not seen in Germany since the times of the Nazi Party, such as the two days of violence against Jews and immigrants at the town of Chemnitz.

How can these trends can be explained? A research project which I’m currently conducting with two of my Ph.D. students at the University of Massachusetts Lowell tests three possible explanations.

Potential perpetrators of violence may assume that the new political regime that they perceive to be supportive of their views will be more tolerant of politically motivated violence or illegal acts. These expectations are not without some basis.

Research I published in 2012 in the journal Security Studies showed that Israeli governments tended to use milder counterterrorism measures when they responded to the violence from groups that were ideologically close to them.

Similarly, studies focusing on the rise of left- and right-wing terrorism in Italy, and white supremacy groups in the American South, further confirmed that political officials are more reluctant to operate against groups which are located on their side of the political spectrum.

In the context of the U.S., individuals and groups that adhere to far-right ideology may interpret signals from government official as acceptance of their actions – or, at least, a sign that they can expect more lenient treatment from law enforcement. The Trump adminstration’s decision to focus its counterterrorism efforts on Islamic terrorism, and defund programs focusing on domestic radicalization may be one such signal. Another example is Trump’s reluctance to single out and criticize far-right groups and activities. His attitude was manifested after white supremacists marched in Charlottesville with Confederate battle flags, anti-Semitic placards and torches – activities Trump seemed loath to condemn. Lastly, conspiracy theories presented by some far-right pundits about the left’s involvement in the recent sending of pipe bombs, and the president’s decision to put the word “bomb” in quotation marks when addressing such incidents in his Twitter account may be read as tacit defense of such acts.

Another possibility we are testing is that perpetrators of violence feel empowered by Trump’s electoral victory in 2016. They feel his winning the election means their actions and ideology are gaining growing public legitimacy. In other words, they feel a sense of duty to continue to be engaged in political participation to ensure the implementation of their political ideology, as well as to attain a more visible position within the political arena.

A third explanation is based on political scientist Ted Gurr’s classical theory of relative deprivation. Gurr’s theory is that political violence often results from a gap between constituencies’ expectations and the actual goods provided by the government.

The reasoning here would go that the election of Trump led to high expectations in the American far right that the federal government would adopt at least some of their militant views and policy ideas. If, in the eyes of far-right activists, these expectations were not met, some of them may express their frustration via violent activities.

The difficulties of the current administration in implementing some of its immigration policies, as well as some willingness to compromise on the issue of gun legislation, may have frustrated activists who may feel the need to express their concerns via violent or illegal acts. For example, the Pittsburgh shooter felt Trump was a globalist not a nationalist, and influenced by his Jewish family and close associates.

While our study is still ongoing, some initial findings can provide insights about the applicability of the above mentioned explanations.

The fact that the rise in the level of violence occurred immediately after the 2016 elections, and the relative success of the administration in delivering on many of its election promises – the travel ban, electing two justices to the Supreme Court – indicate that empowerment rather than a sense of deprivation may be responsible for the rise in the level of violence. The fact that the violence hasn’t increased since its peak in 2017 also suggests that the root causes of the violence are related more to the election results than subsequent policy developments. Moreover, the administration’s reluctance to delegitimize violent manifestations further enhance this sense of empowerment.

It is important to note that historical dynamics also support these insights. A study I published in 2012 shows that anti-abortion violence actually tends to increase following pro-life decisions of the Supreme Court. For example, between 1989 and 1992, a series of pro-life Supreme Court decisions upholding increased state supervision of abortion procedures empowered pro-life activists. Anti-abortion violence increased.

Coming back to today, the growing polarization of the American political system and the tendency to see elections as a zero sum game encourages each of the political parties to maximize the benefits of electoral victory. That, in turn, involves disregarding norms of cooperation and consensus building. What I would argue is that this need to exploit the fruits of victory may also encourage a few supporters of the winning political camp to use violence.