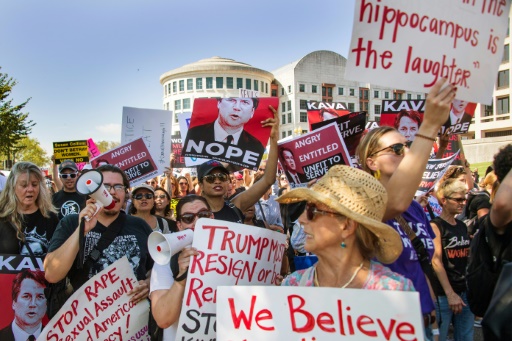 Washington (AFP) – Jessica Cathcart, a 24-year-old from California, says university professor Christine Blasey Ford inspired her to speak up about her own sexual assault, which took place when she was in high school.

Angela Trzepkowski, 55, from Delaware, says she would be devastated if Brett Kavanaugh, accused by Blasey Ford of attempted rape, is confirmed to the Supreme Court of the United States.

Both were among a sea of women who descended on Washington Thursday urging lawmakers not to confirm the judge, now at the center of one of the most polarizing debates of Donald Trump’s presidency.

With a Senate vote poised for as early as this weekend, thousands of people who had traveled from across the United States came to protest and in some cases to meet with their representatives, hoping to prevent Kavanaugh from taking a place on the highest bench in the land. 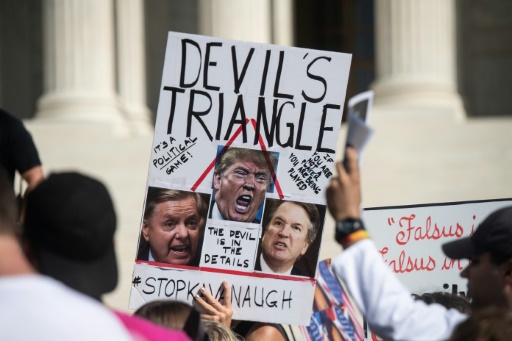 AFP / NICHOLAS KAMM. At the heart of the matter is Brett Kavanaugh’s alleged assault of Christine Blasey Ford, a California professor who last week testified that the judge attempted to rape her in 1982, when they were both in high school.

Last week Blasey Ford testified before lawmakers — and more than 20 million Americans watching live on television — that Kavanaugh attacked her in 1982, when they were both teenagers.

Her powerful account, along with Kavanaugh’s angry rebuttal, has divided the country, rekindling the national conversation on sexual misconduct and the burden of proof in the #MeToo era.

As top Republicans confidently asserted Thursday morning an FBI probe had found nothing to support Blasey Ford’s claim, marchers decried a process they said was designed to exculpate the powerful.

Carrying signs that read “Women must be heard” or simply “Kava Nope,” protesters marched from Washington’s District Court to the steps of the high court, chanting along the way.

Others later held a sit-in the Senate’s Hart Atrium.

“I’m a survivor myself, and I didn’t really tell my story, it happened in high school,” Cathcart said at the District Court.

“I believe Dr Ford, and I believe Kavanaugh is part of a Big Old Boys club that are going to protect him no matter what,” said Trzepkowski, who came to the march with two male friends.

If he is confirmed, “it will be devastating because the president had his thumb on the scale,” she continued.

“This was not the open, fair investigation we had bargained for.”

Carolyn Heyman, a 41-year-old attorney from Alaska, said she had traveled to Washington with a group of friends to attend the protest and meet with their senator, Lisa Murkowski, a centrist Republican who said Trump’s decision to mock Blasey Ford at a rally was “unacceptable.”

“Regardless of what you think about the allegations, the way he reacted to the questions presented doesn’t show he has the right temperament,” she said of Kavanaugh’s testimony.

“He was sarcastic and belligerent at times. That’s not what you want on any court let alone the Supreme Court.”

But as the march snaked its way around the capital, not everyone expressed their support.

“This is all being done because they’re afraid they’re going to lose Roe v Wade,” he said, referring to a 1973 judgment that paved the way for legal abortion in the US, which analysts say is imperiled if conservatives gain a 5-4 majority on the Supreme Court.

“This entire thing is being done to protect abortion. I believe we should have thousands more Americans, who support our president, out here. I’m praying that Kavanaugh will be confirmed and I believe that he will.” 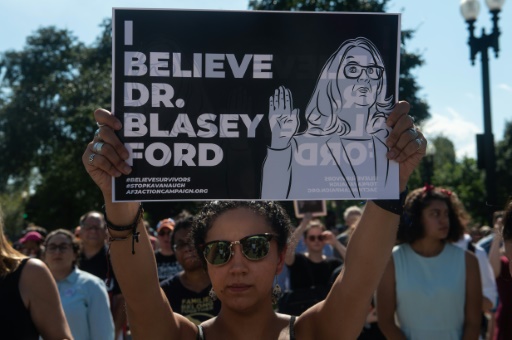 AFP / NICHOLAS KAMM. At the heart of the matter is Brett Kavanaugh’s alleged assault of Christine Blasey Ford, a California professor who last week testified that the judge attempted to rape her in 1982, when they were both in high school.

Asked what she thought of the protest, Doreen Robinson, who was visiting the capital as a tourist from Washington State, said: “Not much.”

Blasey Ford “wasn’t raped, I just think they’re blindly following a woman who has no evidence,” she added.

Many of the protesters meanwhile were resigned to the genuine possibility that with a Republican majority in the Senate, Kavanaugh remained on track to be confirmed.

“The best that I can say is that, being realistic, he is going to get confirmed,” said Cathcart. “But coming here, seeing this — there is such a big wave coming, such a big wave, for women, for people of color, for all minorities.

“We are a giant melting pot and that is the best part of this country. He is probably going to get confirmed but their time is limited.”

Featured Photo: AFP / JIM WATSON. Carrying signs that read “Women must be heard” or simply “Kava Nope,” protesters marched from Washington’s District Court to the steps of high court, chanting along the way.