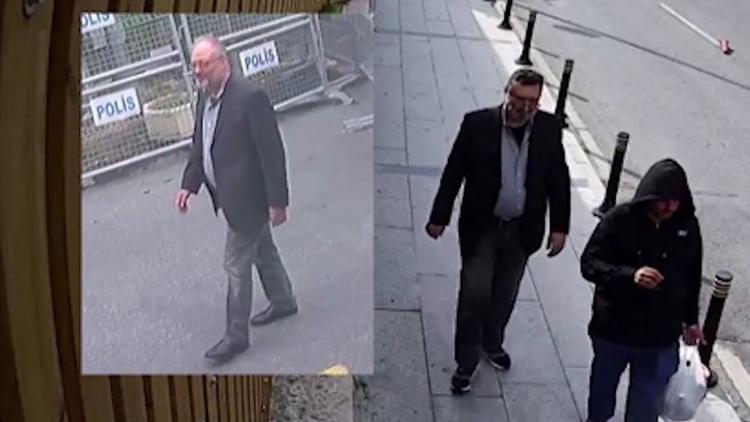 Turkish authorities are subjecting Saudi Arabia to a Chinese water torture, releasing a bit more of the fruits of their investigation into the murder of dissident journalist Jamal Khashoggi everyday, seemingly timed to refute whatever lame excuses the Saudis had come up with that day.

On Monday, Turkey leaked to CNN video and photographs proving that one of the 15-man hit squad sent in by crown prince Muhammad Bin Salman to the Istanbul consulate was a middle aged body double for Khashoggi. The man was filmed entering the building in jeans and a plaid shirt and exiting a couple hours later from the back door wearing Khashoggi’s clothing.

The Saudis apparently hoped to use video of the double, Mustafa al-Madani, to create the impression that Khashoggi exited the consulate and then disappeared later on, at a time when the Saudi Arabian government was no longer responsible for his whereabouts.

The problem? The double forgot to change his shoes! He wasn’t wearing Khashoggi’s shoes when he left the building. Maybe they had a different size. But anyone could see in the video that the shoes were different, and that made the footage useless as an alibi. (Not to mention that al-Madani had donned a fake beard that was extremely chintzy and would never have passed muster for the real thing).

Moreoever, the Turks caught al-Madani on camera changing out of Khashoggi’s clothing and going back to his plaid shirt and jeans, and dumping the other man’s clothes in a trash bin.

So the Saudis had to abandon their hopes of muddying the waters with film of Khashoggi leaving the building.

The whole “body double” caper was so badly planned out and executed that it reflects very poorly on the murdering skills of crown prince Muhammad Bin Salman. Saudi Arabia probably has $1.5 trillion in extra money between its dollar reserves and its sovereign wealth fund. They could have afforded to hire a body double of Khashoggi who had his own beard and could pick up some black shoes.

It is about the most pitiful thing I’ve ever heard of in the way of covert ops.

It tells how the Yemen War could be such a huge SNAFU, if it is being planned and executed by the same high officials.

The mainstream Turkish Hurriyet newspaper, according to BBC Monitoring, on Monday carried a column by Abdulkadir Selvi.

I don’t know of any evidence that the troika mentioned is trying to get Erdogan, and the assertion seems paranoid.

If Erdogan really is trying to move MBS out of office, this could be a wild ride.