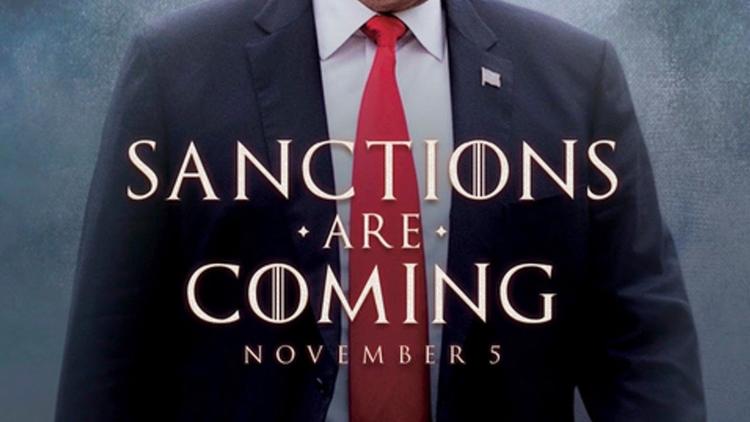 Ann Arbor (Informed Comment) – With his seemingly infinite capacity for tone deafness, Trump tweeted on Friday an HBO-style movie poster of himself with the phrase “Sanctions are coming,” referring to the Game of Thrones tagline that “winter is coming,” and thereby menacing Iran.

HBO issued a formal complaint against use of its material for political purposes. It also sent out a lighter tweet,

How do you say trademark misuse in Dothraki?

For anyone who doesn’t watch “Game of Thrones,” it depicts an epic struggle among seven kingdoms for power, which is kaleidoscopic over time since different ruling houses get the upper hand.

But hanging over them all is a cyclical deep winter during which zombies (“white walkers”) who live in the far north pierce the wall and come south, threatening human civilization.

Aside from copyright infringement, there are many, many things wrong with Trump’s message.

1. It casts the United States as a menacing white walker coming for a country in the global South. That’s completely the wrong message. The US is supposed to represent itself as the good guys, not relentless zombies. Trump may as well have hired the Venezuelans to advertise his foreign policy.

2. It underlines that the United States is the aggressor here. Trump pulled out of the UN Security Council-negotiated treaty with Iran, the Joint Comprehensive Plan of Action (JCPOA), even though Iran had done everything the treaty asked it to do.

3. The tweet makes light of a very serious issue. Trump is now imposing severe sanctions on Iran despite the latter’s compliance. Those sanctions have the prospect of driving more people into poverty, and some people are going to die for lack of medicine (not because medicine is blockaded but because they won’t be able to afford to buy it.

4. This sort of taunting will just stiffen the resolve of the Iranian people and possibly swing them behind the regime.

5. The tweet allows the Iranian regime to portray itself as Jon Snow, standing up to an irrational and bloodthirsty horde:

Exhibit A is the tweet of Qasim Soleimani, head of the special forces (Jerusalem Brigade) of the Iranian Revolutionary Guards corps.