Ann Arbor (Informed Comment) – I write today to honor a titan who has passed on, who once did me a great kindness when I was a mere college student. Meeting him was the thrill of a lifetime.

A saying is attributed to Ali ibn Abi Talib, the cousin and son-in-law of the Prophet Muhammad in the “Path of Eloquence” that “You assert that you are a paltry thing, but within you is enfolded a universe.”

Of no one was that more true than Stan Lee, who died today, aged 95. Lee’s incredible imagination literally spawned universes, not to mention a galaxy of memorable characters– Peter Parker/ Spiderman, the orphan who attempted to redeem an act of callousness that led to the murder of his own uncle, the blind Matt Murdoch who overcame his challenge with other senses, the repulsive but resigned Ben Grimm (the Thing of the Fantastic Four), who bridged the age of the old horror comics of the 1950s and the new era of costumed heroes that Lee kicked off in the psychedelic ’60s.

Lee was born Stanley Lieber in 1922 in Manhattan to Romanian parents of Jewish faith. He served in the Signal Corps during WW II, having already gotten a start as a comic book writer. (His first story was about Captain America, then fighting the Nazis.) I think the best evocation of that era of the comic book in the 1940s is Michael Chabon’s wonderful novel, The Amazing Adventures of Kavalier and Clay.

He had dreamed of being a novelist and reserved the name Stanley Lieber for serious writing, using “Stan Lee” as a pen name. But the comic book writing took over his life and it was Stan Lee who ultimately became the story teller who thrilled millions of fans.

Like many people who were teenagers in the 1960s, I became a big fan of Lee’s comic books. I started collecting comics (no easy task for an army brat always on the move). Lee’s writing excited my imagination and expanded my vocabulary and my horizons. His evident humanity and the high ethical values and tolerance he promoted made an impact on me. I started writing fan letters in the 1960s and was over the moon when some got published. One of the writers Lee hired, Roy Thomas, who had briefly been an English teacher in St. Louis, was so incredibly kind as to correspond with me. Maybe I read too much into his notes, but I felt he was encouraging me to try writing.

I went off to Northwestern University in 1971. I listened to the student radio station there, WNUR, and discovered that there was a Saturday morning show reviewing the comics that came out that week. One of the anchors was Wally Podrazik. I became a regular listener. Occasionally, I disagreed with a review, and I remember writing a letter to the hosts suggesting indelicately that they had misunderstood a plot line. They were very gracious, since they not only bothered to reply to my impertinent missive, but actually invited me to join the show and to do some reviews of my own. And so I did. (My first appearance was pretty painful since I unexpectedly had mic fright and my voice kept wavering; but Wally encouraged me and I improved and learned some tricks of the radio trade). I still met people years later who used to listen to the show.

In the fall of 1973, I was awarded a Richter Traveling Fellowship for two quarters of honors research in Religion in Beirut, which I would take up the following year. I wrote on Christian-Muslim dialogue, a movement of sorts in Lebanon after Vatican II. (Some of the themes I first explored in 1974-75 as a senior stayed with me and I came back to them in my just-published book, Muhammad: Prophet of Peace amid the Clash of Empires.)

But there I was in autumn 1973, aware that in 11 months I would go off to Lebanon. And I knew it was just the beginning of a period of living abroad, since I wanted to stay in the region for an MA afterwards, and get fluent in Arabic. I had to do something with my comic books collection. And I felt as though it was one of those moments in life when I should let go of my earthly possessions and size down and travel light through that period of my life.

So I went to the university library and they referred me to the McCormick Library of Special Collections. I made an appointment to talk to a curator, Russell Maylone, and I made an outlandish proposal. I said that I wanted to donate my collection, which included Spiderman #1, to the library, and would they take the books. To my slight amazement, the library agreed, in part because they were establishing a center for the study of popular culture and thought my collection could be the core of holdings in this area.

I told Wally about this development, and he had the brilliant idea of writing Stan Lee and asking him to come dedicate the collection! 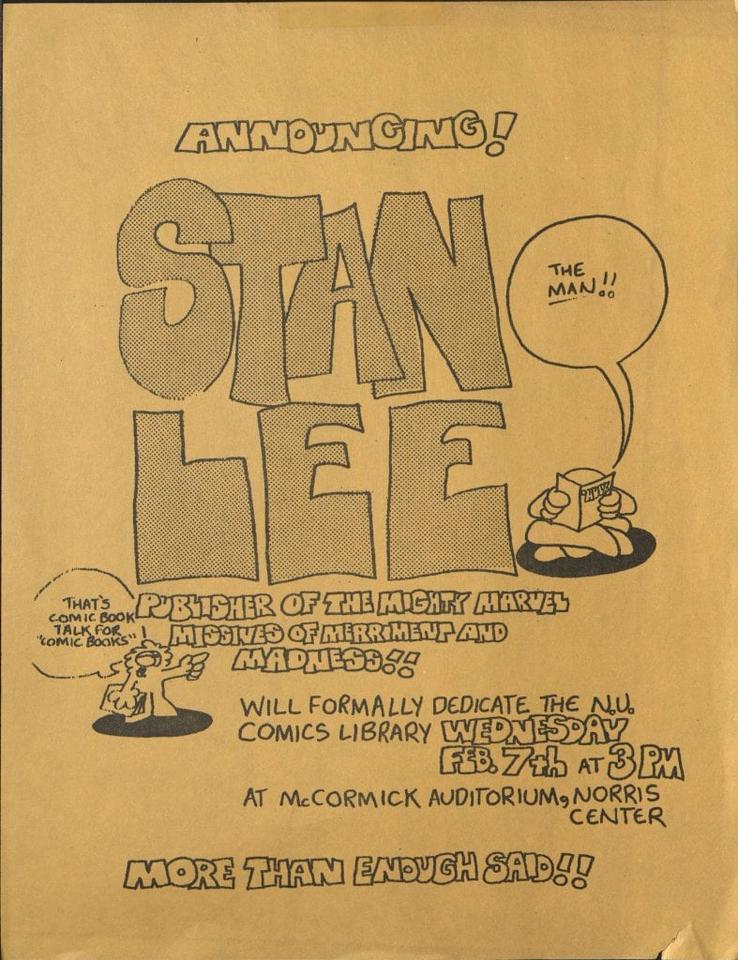 And Stan said yes! And he agreed to give Northwestern gratis a subscription to all the titles in my collection so that there would be no gaps.

On February 7, 1973, Stan Lee came to Evanston and dedicated the new collection.

Lee said in part, “Comic book publishers used to publish comics as quickly and cheaply as possible, putting down any kind of junk hoping to appeal to young kids and to adults with less-than-exceptional intelligence. If somebody asked them what they did for a living, they’d say they were publishers and walk away before anyone asked them what they published . . . The success of the ‘Marvel Age’ is that we made our heroes real—-if you can imagine as real a guy with green skin and the strength of a hundred men,” he said. “I mean, when a guy in long underwear walks down the street, people don’t just walk past him. What would really happen in that situation?”

I much later realized that our ceremony, and the placement of his books at a university library, meant something to Stan Lee, someone who had by his own admission once been sheepish about admitting at Manhattan cocktail parties what he did for a living. And now his works were no longer ephemera, the academy was taking an interest.

I also made some remarks, of which Benn Joseph in his article of today reminded me. I saw Lee’s moral vision as a key element in his writing–subtle, not preachy, but very much a part of it. I said I was donating the collection so that “this particular Sunday school, which perhaps has a truly beneficial effect on the characters of maturing people all over the world, might be available to the historian and the student interested in popular culture or in the comic book as an artistic medium.”

I also praised, as I remember, the nurturing of vision and imagination in which Lee was engaged.

We then all went out to lunch at a fancy restaurant in Evanston and Wally and I discussed Marvel’s new ventures with Stan, who was eager to get fan reaction. We liked Roy Thomas’s and John Buscema’s Conan the Barbarian books but thought the attempt occasionally to throw back to 1950s-style luridness looked a little campy in the 1970s. Stan, amazingly humble, took our criticisms with good humor.

Before the party broke up, I asked Stan if he would write out and sign a piece of dialogue I especially liked, between a bystander and the Watcher. He agreed, though half way through he asked irascibly if I didn’t have any shorter favorite quotes. 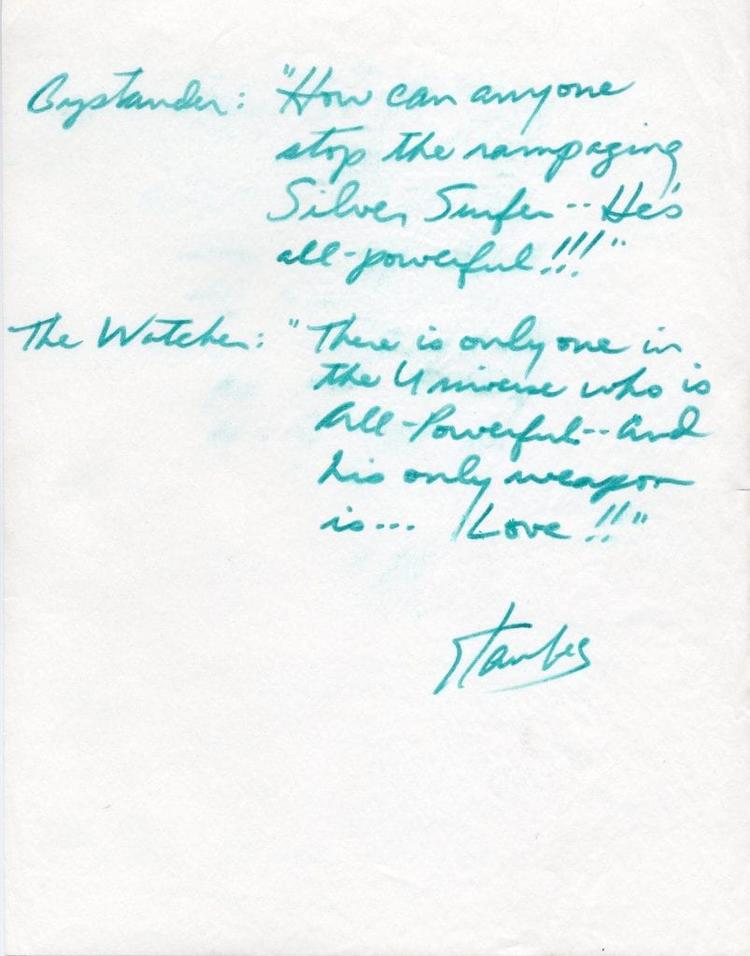 BYSTANDER: “How can anyone stop the rampaging Silver Surfer? He’s all-powerful.”

THE WATCHER: “There is only One in the universe who is All-Powerful, and his only weapon is . . . Love.”

(Watchers are sort of the librarians and ethnographers of the universe, recording everything.)

Stan Lee spoke to the divided American society of Tricky Dick Nixon at a time when the US was still in Vietnam and the politics of race were still roiling the country, and his message was the one God of love. He lived to preach that message to a divided society in the teens of the twenty-first century.

In the aftermath, I felt as though that slip of paper from Stan with the quote on it was also a possession, and I was trying to dispossess myself of possessions, so I gave it to the McCormick Library, as well.

Stan Lee was one of my heroes. I read thousands of the words he so generously shared with us, and my imagination was expanded by his incredible creativity, and I was instructed by his generous, humane, ethical vision. I was so lucky to have met him on that magical day. I wept today. We’ll miss him.

“You assert that you are a paltry thing, but within you is enfolded a universe.” – Ali.