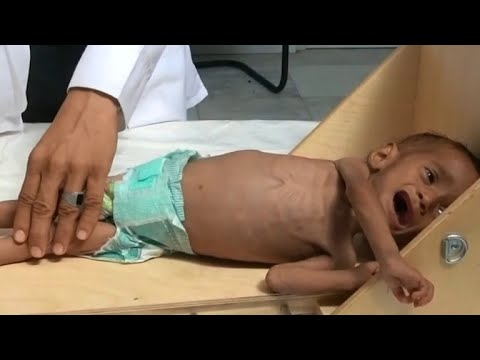 Some 85,000 children under the age of five may have died of acute malnutrition during the last three years of war in Yemen, the United Kingdom (UK)-based Save the Children announced yesterday.

“The number is equivalent to the entire under-five population in the UK’s second largest city of Birmingham,” Save the Children added.

Last month, the United Nations (UN) warned that around 14 million Yemenis were “on the brink of a famine.”

The relief organisation noted that its figures on mortality rates for untreated cases of acute malnutrition in children under five were based on data compiled earlier by the UN.

Rising food prices and the devaluation of the country’s currency, as a result of the war, are putting more families at risk of food insecurity.

“We are horrified that some 85,000 children in Yemen may have died because of extreme hunger since the war began,” Save the Children’s director for Yemen, Tamer Kirolos, said, warning: “For every child killed by bombs and bullets, dozens are starving to death and it’s entirely preventable.”

“In the past few weeks there have been hundreds of airstrikes in and around Yemen’s Hodeidah, endangering the lives of an estimated 150,000 children still trapped in the city,” Kirolos pointed out, calling for “an immediate end to the fighting so no more lives are lost.”

He noted that the organisation had provided food for 140,000 children and had treated more than 78,000 children for malnutrition since the start of the crisis. “Despite the challenges, we’re saving lives every day.”

Hodeidah – which overlooks the Red Sea – includes a port that is being considered as the main source of food imports and essential humanitarian aid. International relief organisations say that any attack on the city “may disrupt its operations and put more civilians at risk.”

Impoverished Yemen has remained in a state of civil war since 2014, when Houthi rebels overran much of the country, including the capital Sana’a.

In 2015, Saudi Arabia and its Arab allies launched a massive air campaign aimed at reversing Houthi military gains and shoring up Yemen’s embattled government. In recent weeks, international pressure has mounted on the warring parties in Yemen to end the war.

According to the UN data, more than 10,000 people have been killed in the war, while more than 11 per cent of the country’s population has been displaced.

CBS News: “Analysis: 85,000 children may have died from starvation since start of Yemen war”