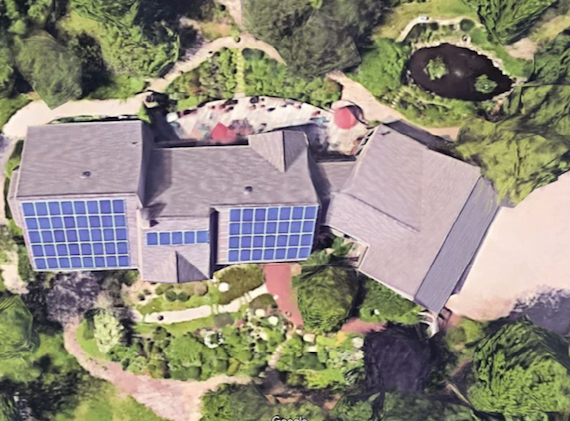 Generally, it seems, we are not supposed to do anything about the climate emergency producing global heating. It’s a Chinese plot. It doesn’t exist. It’s “libtard nonsense.”

Well, I don’t agree. I think it’s really serious. So, what can I DO about it? Well, there is one thing, for homeowners and building owners:

This is the Google Earth view of our house with its 73 solar panels, installed by Amy Strutz of AJ Leo Electric and Solar, in Ypsilanti. Aren’t they beautiful?? Solar panels, all busy making electricity!!

There is something I can do about global warming. Well, how much? you ask. On average, as of mid-October our panels had produced on average 55.25 kilowatt hours [kWh] per day this year. They produce the least on snowy days, especially if the panels are covered with snow. The best predictor of how much they will produce on any given day is the number of minutes of sunlight per day we have. Then it varies with cloud cover and other weather issues. This year, the highest production was 111.76 kWh on April 19.

We do still need our electric utility,DTE. We can’t produce power at night, and we don’t have storage batteries. But we often produce more in a day than we can use, and it goes into the grid to power your house. (DTE credits us a tiny amount for that excess.)

But there is more. This year, to date, we have avoided producing 10,829 kilograms (=11.94 tons) of carbon. That is also a WIN, our contribution to fighting global warming. It warms me!

It was expensive to install. But with the savings I noted above, we will be even in about 6 years after installation. After that. . . it’s all gravy. This was possible in part because of the Federal solar tax credit of 30% of the installation costs (through 2019; after that it goes down over a few years to 10%, at least with current law).

Occasionally, I walk outside and down through the flower garden, and turn around to just LOOK at them. So so beautiful!!

Daniel E. Moerman is William E. Stirton Professor Emeritus of Anthropology at the University of Michigan-Dearborn and Research Associate, Botanical Research Institute of Texas. Among his accomplishments is the development of an ethnobotany catalogue of 4,000 plants used for medicine by Native Americans.