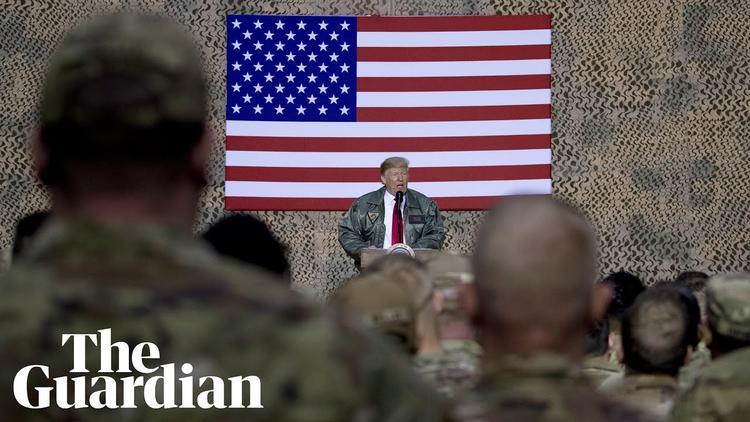 Ann Arbor (Informed Comment) – Trump’s surprise visit to a US military base in Iraq on the day after Christmas has provoked a strong critique among some Iraqis, who mind that Trump slipped in and out to visit the Ain al-Assad base in al-Anbar Province but did not bother to meet with any Iraqi officials. It was as if Iraq were an empty vessel useful only for hosting the US military.

Trump has made a poor impression in Iraq by saying the US should have “taken Iraqi oil” as a reward for having invaded the country in 2003. He also keeps asking the politicians in Iraq to use their oil money to pay the United States’ military expenses incurred during the invasion and occupation of the country.

A communique from the office of Prime Minister Adel Abdul-Mahdi affirmed that the Iraqi government had been apprised of Trump’s visit. It said that initially it was envisaged that Trump would be greeted with a red carpet and conduct consultations with the prime minister. Differences of opinion about the character of the visit, however, the statement said, caused these plans to be dropped in favor of a telephone call between the two leaders that covered recent developments in the region, including the planned US withdrawal from Syria and joint US-Iraqi ongoing operations against ISIL. Abdul-Mahdi invited Trump to Baghdad, and Trump invited the prime minister to Washington.

The communique is as polite as is possible but cannot cover up that some sort of tiff took place between the two sides that torpedoed the planned meeting in Baghdad. A lot of Iraqis were offended by the omission. Some say the dispute was over where the meeting would take place. Reuters says it was told by some parliamentarians that Trump wanted to summon Abdul-Mahdi to the American base. Obviously, no Shiite politician could risk being seen to attend Trump’s royal court on a foreign American base. The Iraqis would have wanted the meeting to be held at the PM’s offices.

Sabah al-Sa`edi, leader of the Shiite Reform Coalition in parliament, denounced Trump’s visit to the base without a face-to-face with the prime minister as a “blatant violation of Iraqi sovereignty.” He reminded Trump that “the era of the US occupation of Iraq is over.” Reform (al-Islah) is led by Shiite cleric Muqtada al-Sadr, who emerged as a power broker in the most recent Iraqi election and government-formation process.

A coalition of Shiite militias that ran as a party, led by Hadi al-Ameri (the head of the pro- Iran Badr Corps)–al-Bana’– issued a statement that slammed Trump not only for violating Iraqi sovereignty but also for displaying disdain and arrogance toward Iraq, according to Euronews Arabic. The coalition said that Trump’s visit “signaled a number of question marks about the nature of the US military presence and its actual goals, and the danger to Iraqi security that these goals may constitute.”

One, admittedly extreme, reaction came from Qays al-Khazali, the head of the radical Shiite militia, the League of the Righteous (`Asa’ib Ahl al-Haqq). He complained that Trump visiting his base in Iraq violated the protocols of diplomacy. He said that Iraq “is not an American state” and that “we will not permit visits to American forces or allow them to stay, under any circumstances.”

He added, “The response of Iraqis will be for parliament to pass a decree expelling your military forces in spite of your desires, and if you won’t leave we have the means and the experience to expel them by other means.”

Al-Khazali is a respected militia commander whose forces played a role in defeating ISIL / Daesh, and which are strongly backed by Iran.

But he can’t actually get parliament to pass a decree expelling US troops. The new Iraqi prime minister, Abdul-Mahdi, is a former Shiite radical himself, but is nowadays respected by all sides and said to have fair relations with the US. He and the rest of the political elite in Baghdad desperately want the 5-6,000 US troops in the country to go on helping train up a new Iraqi army and to lend strategic advice and logistical help to the effort to mop up ISIL remnants in northern Iraq and eastern Syria. There may come a time down the road when Iraqis in general no longer want the US military presence, but I doubt that time has yet come.

Still, the voices denouncing Trump’s visit as a sort of neo-imperial showboating came from significant parties, and point to the tensions in the US-Iraqi relationship. Iraq doesn’t want to boycott its neighbor and ally, Iran, and Trump is insisting Baghdad do. Trump’s violation of the nuclear deal and his attempt to put Iran behind the eight ball are not appreciated by Shiite parties in Iraq, who are typically close to Iran.

Guardian: “‘We’re no longer the suckers of the world,’ Trump tells troops in Iraq”