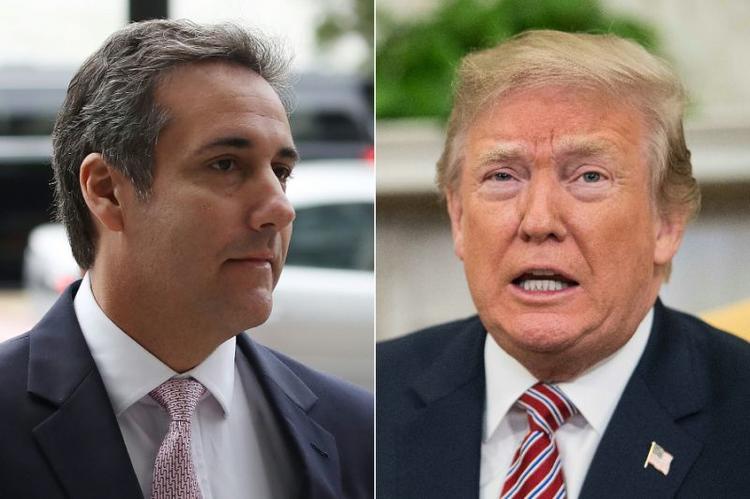 Donald Trump has said he never directed his former lawyer Michael Cohen to break the law.

US President Donald Trump knew it was wrong to order election-eve payments to two women who claimed to have had affairs with him, his longtime lawyer Michael Cohen said in his first public comments since being sentenced to three years in jail.

Convicted of multiple crimes including violating campaign finance laws with the hush payments, Cohen flatly challenged the assertion that his former boss never instructed him to break the law, in an interview broadcast on Friday.

“I don’t think there is anybody that believes that,” Cohen told ABC News.

Trump acted because he “was very concerned about how this would affect the election,” Cohen said in an extensive interview on “Good Morning America.”

Asked if Trump knew the payments to Stormy Daniels and Karen McDougal were wrong, Cohen replied said “of course.”

The US president is entering his third year in office facing an increasingly perilous situation as federal prosecutors and Robert Mueller’s investigation into alleged collusion with Russia close in on him and his inner circle.

Cohen has told prosecutors the payments totaling $280,000 were made “in coordination with and at the direction” of Trump — referred to in the case as “Individual-1.”

There was no immediate response from Trump to the Cohen interview, but a White House spokesman dismissed Cohen’s comments as those of a “self-admitted liar.”

Trump has denied having sexual relations with either of the women.

But according to Cohen, the payments were designed to bury potential scandal at the height of the 2016 campaign in which Trump surprised many by defeating his Democratic opponent Hillary Clinton.

“First of all, nothing at the Trump Organization was ever done unless it was run through Mr. Trump. He directed me to make the payments, he directed me to become involved in these matters,” he told ABC News.

“And here is the truth: People of the United States of America, people of the world, don’t believe what he is saying. The man doesn’t tell the truth. And it is sad that I should take responsibility for his dirty deeds.”

Asked if he believed Trump was telling the truth about Russia’s meddling in the US election, Cohen said “no” — but declined to comment further.

“That sort of gets into the whole investigation right now between (the) special counsel’s office, the attorney general’s office, you also have the Southern District of New York — I don’t want to jeopardize any of their investigations,” he said.

Trump was as combative as ever on Twitter Thursday when he sought to distance himself from Cohen, his loyal fixer for a decade.

In his first public reaction since Cohen was sentenced, Trump said he was the victim of the attorney’s malpractice.

“He was a lawyer and he is supposed to know the law,” Trump tweeted. “It is called ‘advice of counsel,’ and a lawyer has great liability if a mistake is made. That is why they get paid.”

Later, he told Fox News he was being singled out for a grilling over payments that would not cause a ripple elsewhere among politicians.

“Nobody except for me would be looked at like this, nobody,” he said.

In a separate development, The New York Times and Wall Street Journal reported that federal prosecutors have opened another line of election-related inquiry, investigating whether foreigners illegally funneled donations to Trump’s inaugural committee and a pro-Trump super PAC.

The Times cited people familiar with the inquiry as saying it focused on whether people from Qatar, Saudi Arabia and the United Arab Emirates used straw donors to make donations in hopes of buying influence over US policy.