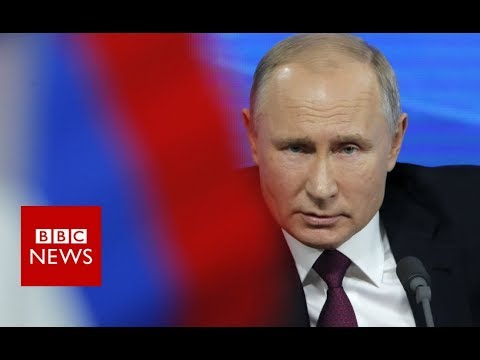 Ann Arbor (Informed Comment) – Sarah Sanders, Trump’s spokesperson, alleged that the Russians are unhappy with Trump decision to get out of Syria. As usual, Ms. Sanders is building sandcastles in the sky with no foundation.

BBC Monitoring reports that Russian President Vladimir Putin spoke at a news conference on Dec. 20 on Rossiya 1 TV, and in the course of his appearance he addressed Syria.

Putin said he agreed with Trump that substantial attrition has been visited on ISIL:

“We achieved significant changes in combating terrorism on this territory and dealt serious strikes on IS in Syria. In this, Donald is right and I agree with him.”

Putin went on to observe that the US military presence in northeastern Syria was all along illegitimate and that it was in any case unnecessary.

“Is the presence of the US military needed here? I think that it is not needed.

He said, “Let us not forget that the presence of your troops, is illegitimate,” adding that there are only two ways a US military presence in Syria could be licit in international law. One is that the UN Security Council should ask that foreign forces go into another country because the latter has become a flashpoint for global instability. “…0nly thanks to a decision of the UN Security Council can a military contingent be there.”

BBC Monitoring adds, “The US military “has neither one nor the other” Putin said, arguing that it would be “right” for American forces to leave.”

Putin also cast some doubt on whether the US would really get out, noting that they had talked like that about Afghanistan!

Maria Zacharova, spokesperson for the Russia ministry of foreign affairs, concurred with the Russian president, saying that Trump’s withdrawal decision would return the US to the fold of international legitimacy.

She expressed skepticism about the US withdrawal form Syria, saying Russia would just have to wait and see.

The Russian Foreign Ministry expressed pleasure at the decision, saying that it paves the way for a political settlement in Syria. I presume this cryptic statement means that the Kurds will now no longer have any choice but to dicker with Damascus about their future.

It said that Trump’s decision will have a positive impact on the formation of the Syrian constituent assembly for writing the new constitution, and on the situation at Tanf in the southwest, where the US was attempting to block Iran.

Putin: the presence of US troops in Syria is illegitimate – BBC News