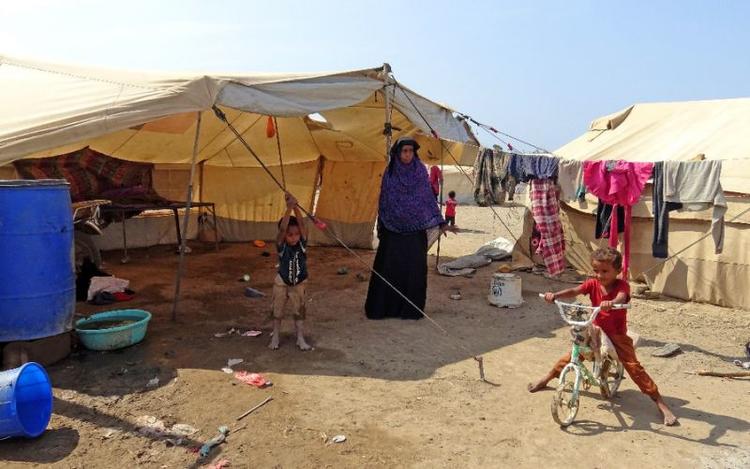 More than two million Yemenis have been displaced by the conflict between the Saudi-backed government and Iran-aligned Huthi rebels
For many families in Yemen, the war has not only stripped them of their livelihoods, homes and belongings but something far more valuable: their dignity.

“It was humiliating, and now that we are here in this refugee camp, it is even more humiliating,” said Ali Mohammed Mustbani in a makeshift tent, his eyes sunken and posture stooped.

Mustbani fled with his wife and six children from their hometown in northwestern Hajja province to the Al-Khudeish camp in the same governorate after heavy air strikes.

They are among the more than two million people displaced by a conflict between the government, backed by a Saudi-led military coalition, and the Iran-aligned Huthi rebels.

“Our situation has gone from bad to worse, and we have not received any assistance,” he said.

Food is scarce in Al-Khudeish, where children — some barefoot — roam and struggle to occupy themselves. 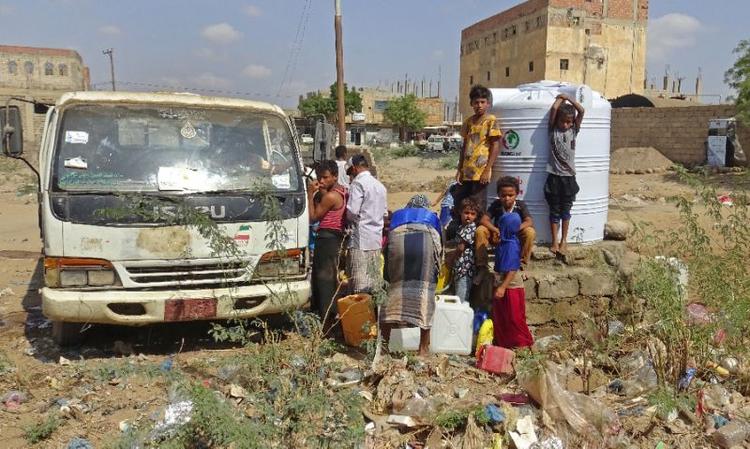 A little girl combs her younger sister’s hair, while another young girl cares for a baby.

What little food the camp residents can get their hands on is cooked or baked in a pit.

On the floor, a young girl cuts up okra with the edge of a metal cup to mix with mallow, a popular salad green that grows wild in Yemen.

Life in the Al-Khudeish camp is not easy.

Yehya Kaloum’s family sits on the floor of a tent, in silence.

They have lost several family members, who were among dozens killed in an air strike in March 2015 at the Al-Mazrak camp for the displaced, also in Hajja province.

“We fled on foot with only the clothes on our backs,” he told AFP.

“We are suffering. We have no water, we have no food, and we don’t have health facilities to take care of the children”.

About 300 kilometres (185 miles) south of Hajja, Yemenis in a camp in Khokha, Hodeida province, have fled a different threat.

The World Health Organization says the war in Yemen has killed an estimated 10,000 people, mostly civilians, but other groups say the toll is much higher
But they face the same day-to-day struggles as those in Al-Khudeish.

“We left because of the fierce… shelling by the rebels both at night and during the day,” Mohammed Ghaleb told AFP.

He said Huthi snipers were dispersed throughout his hometown of Hays, some 30 kilometres from Khokha, which is itself around 100 kilometres south of the Red Sea port city of Hodeida.

The shelling forced many to flee Hays.

Neighbourhoods there lie abandoned, and bullet-marked shops have closed their doors.

The warring sides reached a truce accord for Hodeida province during talks in Sweden this month, but the hard-won ceasefire has been followed by repeated skirmishes.

Mohammed Saleh Oseili and his extended family of more than 100 people left Hays almost a year ago.

He used to be a truck driver but is now jobless.

“I have lost my licence, I have lost my identity card,” Oseili told AFP. “We saw people killed by the Huthi missiles, snipers were above us (on rooftops) everywhere — we preferred to leave.”

Much like those in Al-Khudeish, Oseili’s family in Khokha do not know where their next meal is coming from.

“We are not teaching our children. We hope that an organisation can help educate them,” she told AFP.

“Before, we were content, living in our homes with pride and dignity.”

The conflict triggered what the UN calls the world’s worst humanitarian crisis, with nearly 14 million Yemenis at risk of famine due to violence, poverty, disease and blockades.

Both parties stand accused of acts that could amount to war crimes, in hostilities that escalated when Saudi Arabia intervened in favour of the internationally recognised government in 2015.

The World Health Organization says the war has killed an estimated 10,000 people, mostly civilians, but other groups say the toll is much higher.

Featured Photo: More than two million Yemenis have been displaced by the conflict between the Saudi-backed government and Iran-aligned Huthi rebels (AFP Photo/-)