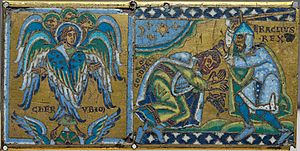 As I noted here, an anonymous operative going by “Stephen M. Kirby” who is otherwise a ghost on the internet attacked my book at a major hate site directed against Muslims (I won’t link precisely because it is a hate site).

I am replying to his points serially.

As to Kirby’s comments on my book, he begins by noting my methodology. I argue that if the Qur’an (610-632) does not mention a historical incident that is reported 200 years later by writers in the Abbasid Empire, we can’t be sure it happened. I use the Qur’an as my primary source.

Kirby accuses me of interpreting Qur’an verses. I plead guilty. Interpreting texts is what historians do. I’ve been studying this subject off and on for 40 years and am a lifelong Arabist. Kirby hasn’t and isn’t.

My approach is just that of academic history. We don’t write about the first-century New Testament from the works of Origen or Eusebius in the third and fourth centuries. We use the gospels and the book of Acts and the letters of Paul, etc., which are early, not later elaborations by subsequent generations. Eusebius, like al-Waqidi, wrote at a time when Christianity had become the religion of an empire, which colored his view of the religion.

Kirby complains that although I am suspicious of Abbasid accounts, I do use some.

I use accounts attributed to `Urwa ibn al-Zubayr (d. 713) which *appear* in the sources Kirby lists. I use them because Andreas Görke and Andreas Schoeler have found that 8 episodes in the Prophet’s life are reported through ‘thick’ chains of transmission and appear in many later sources that are independent of one another. This is a technique of the study of the sayings and doings attributed to the Prophet Muhammad developed by Gautier Juynboll.

However, I use these accounts tentatively and in recognition that even though in their present form they may be relatively early (a hundred years after the death of the Prophet?), they are still late and sometimes contradict the Qur’an. I critique them at length in the book, which “Kirby” would know if he actually read it instead of cherry-picking it.

The Qur’an remains my primary source, against which later sources are weighed. I admit later accounts only if they do not contradict what is in the Qur’an.

That is, my principle is not that no information contained in Abbasid-era works can ever be cited or considered. It is that such information is not primary and cannot stand on its own as a historical source. Where it seems in accord with the Qur’an, however, it can be considered (but still should be used carefully).

Kirby implies that I am being inconsistent in citing these later accounts but privileging the Qur’an. He is wrong. He is wrong because, being a mere polemicist, he does not understand how academic historians do their work.

It is not only the Qur’an that tells us whether a later account is plausible. Other historical sources do, as well. The Abbasids invented a battle by early Muslims at Mu’ta in Transjordan, which they variously date to 627, 628 or 629. David Powers at Cornell University in his book, Zayd, has shown that this episode cannot be considered historical. The earliest Muslim accounts say that the Muslims were defeated by a Christian Arab garrison reinforced by Roman imperial troops. Later Muslim accounts turn it into a victory for an early Muslim army.

I point out that, moreover, the Abbasids make this battle a conflict between the Christian Eastern Roman Empire and the early Muslims. But Constantinople did not hold southern Transjordan in 627-629, Sasanian Iran did.

So Mu’ta is not in the Qur’an. There is no sign in what we think are the later chapters of the Qur’an that its pro-Roman and pro-Christian attitude had changed, and anyway the Christians weren’t even in power in Transjordan at that time. And the accounts of the battle are so diverse and contradictory that it has all the hallmarks of an unreliable invented tradition.

It is possible that something like Mu’ta happened after Muhammad’s death in 632 and that it got projected back into the time of the Prophet.

Polemicists like “Kirby” are so attached to the later Abbasid military history because they want to depict Muslims as essentially violent. Muslims have committed violence in history, as has everybody else, but there aren’t any essences and Muslim traditions and values have changed over time. There have also been Muslim pacifist movements such as the Mourid Sufi Order of Ahmadu Bamba and the Servants of God of Abdul Ghaffar Khan. It would be just as easy to quote Eusebius and other Christian imperialists of the fourth and fifth centuries to prove that the New Testament is inherently violent and naturally produced a violent Christian tradition through history.