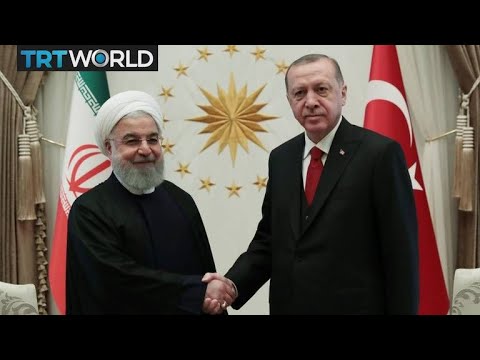 US President Donald Trump’s abrupt announcement last week of the withdrawal of American troops from Syria caught many people off guard, including his own administration officials. It actually prompted the resignation of Defence Secretary James Mattis.

The surprise, however, was perhaps greater in Tehran’s corridors of power. Less than two months earlier, US national security advisor John Bolton had affirmed ahead of Trump’s speech at the UN that the US would not leave Syria so long as Iran and its proxies operated in the country.

While Tehran arguably feels relieved and triumphant about the sudden reversal of Washington’s Syria policy, it is waiting patiently to see how the pullout will unfold and what, if anything, will replace it. The withdrawal might be a harbinger of a larger-scale American military drawdown in the region, but it might also be a prelude to a more systematic focus on, and greater trouble for, the Islamic Republic.

Shortly after Trump’s announcement, Rodney Hunter, the US political coordinator in the UN, told a Security Council meeting on Syria that Washington “will use all instruments of our national power to press for a withdrawal of Iranian-backed forces.” Moreover, during his unannounced visit to Iraq on 26 December, Trump revealed that he intended to keep roughly 5,200 American troops in the country — understood to act as a counterweight to the Iranian presence — and use Iraq as a “base if we wanted to do something in Syria.” Needless to say, the likelihood of a military conflict with Tehran in the future will rise dramatically if an anti-Iran hawk succeeds Mattis.

Either way, the upcoming US absence from Syria has presented Iranian leaders with another significant dilemma, involving Turkey and its anti-Assad Islamist allies on the one hand, and Kurdish-led Syrian Democratic Forces (SDF) in the oil-rich northeast — who have served more or less as a reliable brake on Turkish and rebel ambitions — on the other.

In a joint statement issued after President Hassan Rouhani’s latest meeting with his Turkish counterpart, Recep Tayyip Erdoğan, on 20 December, Tehran and Ankara emphasised their joint commitment to fight against the Turkey-based Kurdistan Workers’ Party (PKK) and Iran-based Kurdistan Free Life Party (PJAK). For Ankara, the Kurdish-dominated Syrian Democratic Forces (SDF), including its major military component the People’s Protection Units (YPG), is an extension of the PKK, which it considers as a terrorist organisation.

A working relationship with Turkey is vital for the Islamic Republic today, as comprehensive US sanctions against its oil industry and banking sector — re-imposed after the Trump administration’s withdrawal from the Iran nuclear deal — have already started to bite. Tehran is therefore unlikely to oppose explicitly a planned military intervention by Ankara to cleanse northern Syria of armed Kurdish forces. Yet, what worries Iran is that the possible fall of Kurdish-held areas in north-east Syria to Turkey and its Islamist proxies might create a complicated situation similar to that in Idlib, where some rebel groups aspire to establish a “republic of north Syria” with Turkey’s blessing and support. This would seriously undermine Syrian sovereignty and set back efforts to restore its territorial integrity. As in the past, it could also allow Turkey to revive an expedient level of collaboration with the Daesh remnants in the Deir Ezzor governorate and use them against the Assad government for political gains.

However, Iran is not comfortable with autonomous Kurdish rule in north-east Syria either. For a start, it has hindered Iranian attempts to carve out an uninterrupted land corridor through north-west Iraq to the Mediterranean Sea. Such a route would be safer and more convenient than central and southern areas closer to the borders of Israel and Jordan.

A self-ruled Kurdish region in Syria’s north-east would also deprive the central government of vast oil resources and fertile agricultural land around the Euphrates, spread over roughly a quarter of all Syrian territory. Before the outbreak of the civil war in 2011, Damascus produced 387,000 barrels of crude per day, most of which came from eastern and north-eastern Syria — including Al-Omar, Shadadi and Suwayda oil fields — currently under SDF control. In February, up to 300 pro-government forces and Russian mercenaries were killed by US air strikes near the city of Deir Ezzor, in one of the war’s deadliest assaults against Kurdish fighters.

Lastly, the widely acclaimed model of governance implemented in “Rojava” or Syrian Kurdistan — which follows a gender-aware version of democratic confederalism — poses an ideological challenge to the Islamic Republic. Tehran is arguably concerned about the ripple effects of Rojava’s unique socio-political experiment as it continues to inspire many people in already restive Kurdish regions in northern Iraq and western Iran.

The ideal scenario for the Islamic Republic and its Revolutionary Guards Corps in the wake of a US troop withdrawal from Syria would be the restoration of relative, if not full, government control over Kurdish-held areas. To that end, Tehran will likely resort to what’s commonly known as “strategic hedging” by trying, with Russian assistance, to keep Turkey at bay as much as possible and curtail the full realisation of Kurdish autonomy in Syria at the same time. Along these lines, it is no wonder that the Assad government has deployed troops near the flashpoint city of Manbij in coordination with the Kurdish-led SDF. Further south around Al-Tanf crossing, however, pro-government forces backed by Iran will likely act with greater certainty and latitude to recapture rebel-held territory once American troops leave.

Maysam Behravesh is a freelance journalist and a PhD candidate in the Department of Political Science at Lund University, Sweden. @behmash.