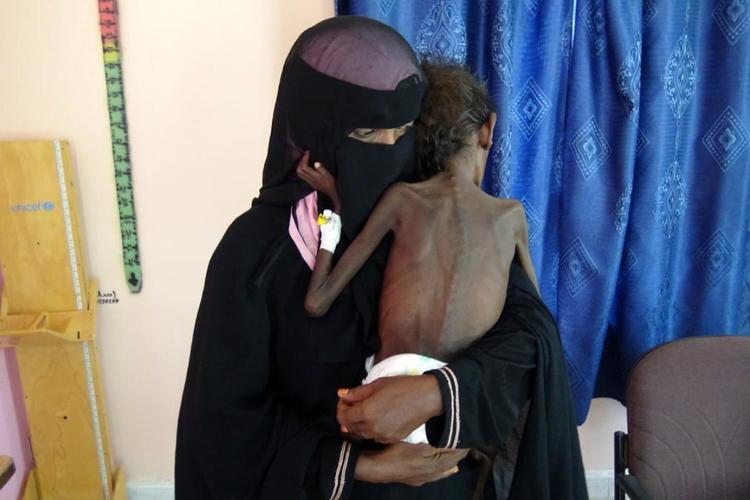 (Middle East Monitor) – Mothers are being forced to leave their children to starve as they face a “catastrophic” shortage of food in war-torn Yemen, a humanitarian group said on Thursday, reports Reuters.

As the warring parties pledged a ceasefire over a key entry port for supplies, Action Against Hunger said many civilians were struggling to survive in a conflict often described as the world’s worst humanitarian crisis.

“We are very much aware that the situation right now is catastrophic,” Valentina Ferrante, the group’s country director for Yemen, told the Thomson Reuters Foundation.

If a family does not have the necessary economic resources to feed the entire family then they will select who to feed. Sometimes you get up to a point where a mother is literally forced not to feed certain members of the family, most probably the youngest one.

Yemen, one of the poorest Arab countries, is locked in a war that pits Iran-aligned Houthi rebels against the government backed by Saudi Arabia, the United Arab Emirates, and the West.

The conflict and ensuing economic collapse have left nearly 16 million people, 53 percent of the population, in urgent need of food aid and famine was a danger if immediate action was not taken, the United Nations said this month.

The warring parties on Thursday agreed to cease fighting for the Houthi-held port city of Hodeidah, which is the main entry point for both commercial imports and aid supplies.

Ferrante said the biggest challenge in delivering humanitarian aid was not money but gaining safe access to conflict areas which were being hit by airstrikes.

“We need to pass the message that we are neutral, so we are not involved in politics, we just need to deliver high-quality humanitarian aid interventions,” she said.

Aid groups hailed the deal in Sweden as a “landmark first step” towards ending the conflict.

“The agreement from Sweden is incredibly encouraging to all of us who seek an end to the war and suffering in Yemen,” said Johan Mooij, Yemen country director for aid agency CARE.

As the UK Government welcomes the Saudi Crown Prince’s first official visit to London, Save the Children has unveiled a life-size statue of a child outside Parliament. The bronze-like statue is a reminder of the dangers that Yemeni children face every day and the risks of British-made bombs fuelling the violence [Save The Children]

He said 80 percent of Yemen’s commercial and humanitarian aid arrives through Hudaydah port.

“Only an end to the war can bring lasting relief to Yemeni people,” said Tamer Kirolos of charity Save the Children.

“Until then, the international community must continue to put pressure on all sides to urgently address the humanitarian crisis to avoid a full-blown famine.”

This work by Middle East Monitor is licensed under a Creative Commons Attribution-NonCommercial-ShareAlike 4.0 International License. #s3gt_translate_tooltip_mini { display: none !important; }

Featured Photo: This picture taken on November 22, 2018 shows Yemeni mother Nadia Nahari holding her five-year-old son Abdelrahman Manhash, who is suffering from severe malnutrition and weighing 5 kilograms, at a treatment clinic in the Khokha district in the western province of Hodeidah. Khokha hospital, located in a government-controlled western province, is one of the war-torn country’s better-resourced clinics. It receives supplies and aid from the United Nations and donors including the United Arab Emirates, a main ally of the internationally recognised Yemeni authorities. But nearly four years into a war that has pushed 14 million Yemenis to the brink of starvation, even Khokha hospital cannot meet the needs of all the malnourished children who arrive daily. AFP.