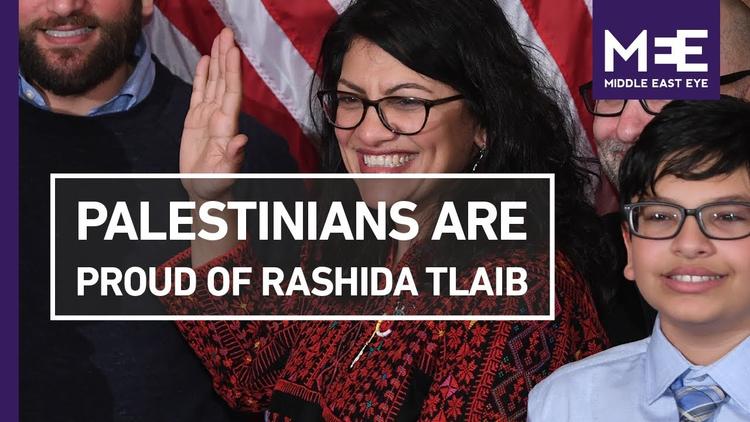 The newly elected Congresswoman Rashida Tlaib, who represents Michigan’s 13th District, is seeking to take a delegation of congressional representatives to the Palestinian West Bank, which is militarily occupied by Israel and where some 600,000 Israeli squatters have usurped Palestinian land belonging to the nearly 3 million Palestinians living there (another nearly 2 million live in the Gaza Strip).

Tlaib represents not only part of Detroit but Dearborn Heights and among her constituents are many Arab-Americans who strongly support Palestine and resent Israel’s colonization project of stealing their land and resources and ultimately hoping to displace them and make them refugees anew.

Ordinarily, the wealthy and powerful American Israel Public Affairs Committee (which ought to have to register as a foreign agent but doesn’t because it is so wealthy and powerful) pays for a trip of these Federal representatives to Israel, where they are introduced to Israeli politicians and given the Israeli story about the Palestinians. This is like visiting Columbia, South Carolina in the 1950s and asking the white state legislators there why Black South Carolinians are so poor and have such bad education and health statistics.

As a result of such successful boondoggles and lobbying, the US is now giving $23,000 to each Israeli family over the next 10 years, $38 billion in total, at a time when Federal employees are not being paid at all and are losing their mortgages and people in Flint, Michigan, are still expected to drink lead-poisoned water. Israel is a wealthy country with a per capita income of $40,000 a year in nominal terms, slightly better than that of France. The only reason that the American public is forking over that kind of cash to the Israelis is that the Israel lobbies have given significant campaign contributions to many in Congress and expect them to put massive aid to Israel into the US budget as a quid pro quo.

Brian Babin, a congressman from Texas’s 36th district, is seeking to block Tlaib’s trip and that of her colleagues by attempting to get the Democratic leadership on the Hill to pull the money for it. Stopping powerful women from traveling to crucial security zones, as Trump stopped Pelosi from going to Afghanistan, seems to be a new plank of the Republican Party platform.

Babin got nearly $6,000 for his 2016 campaign from pro-Israel “industries,” according to this database, though such things are hard to measure because wealthy individuals may also be giving and then pressuring him. By the way, although $6,000 may not sound like much money, actually contributions on that scale are extremely influential sometimes in tight races. You wouldn’t want the lobbyists to give it to your opponent– that would be like losing $12,000 to pay for radio and tv and internet ads.

Babin has through his congressional career voted for positions similar to those of Trump 95% of the time. He may as well be Trump. He voted to remove sanctions from three Russian companies run by oligarchs close to Vladimir Putin. He supported Trump in calling Hillary Clinton a “nasty woman.” He opposes the US refugee program, which is part of our country’s treaty obligations, on the grounds that once admitted, refugees accept entitlements and become a public charge, and that if Muslim refugees are let in they will engage in terrorism and oppress women. of the 750,000 refugees admitted in the past 17 years, none has carried out a physical terrorist attack on US soil. As for oppressing women, he is the one who thinks they are “nasty.”

It is worth attending to Babin’s rhetoric. He complains that Tlaib’s planned trip will be “tax-payer funded.” But then so is Trump’s travel to what are essentially campaign rallies around the country. And that $38 billion Babin voted to give away to Israel is also taxpayer money, and it is hard to argue that he is working for the taxpayer.

Then Babin worries that for a congressional delegation to go to the Palestinian West Bank will harm relations between the United States as Israel. It is hard to see the logic here. US congressional delegations have routinely gone to the West Bank in the past and it hasn’t hurt US-Israeli relations at all, which are so warm that we are giving them $38 billion even after the visits to the West Bank.

The West Bank is under Israeli military occupation, so it is hard to see how visiting it is an affront to Israel. The junior partner in the Israeli occupation is the Palestine Liberation Organization, the constituent parties of which dominate the Palestine Authority. The Palestine Authority was created as part of the Oslo Peace accords and it recognized Israel in return for a pledge from Tel Aviv that Israel would withdraw from the Palestinian West Bank by 1998. Israel pocketed the PLO recognition and declined to withdraw and then flooded hundreds of thousands of Israel squatters into Palestine, taking land, water and other resources away from the Palestinians with whom the Israeli government had concluded the Oslo Accords.

Nor is the Palestine Authority or just “Palestine” Israel’s “adversary.” It is a partner in a long-stalled peace process. Israeli authorities routinely cooperate on security with Palestine police and politicians.

Babin’s discourse imagines the Palestinian West Bank to be an independent country that is an “adversary” of Israel, instead of being an occupied territory of Israel itself, which gets security help from a PLO that was fooled into recognizing its occupier.

What Babin’s odd allegations hide is that he wants the Israeli narrative on Palestine to be the only narrative to which the Congress is exposed, and he wants to prevent the representatives from seeing the horror of the occupation with their own eyes. The 215,452 Palestinians in al-Khalil (Hebron) are terrorized by the some 800 Israeli squatters who have gradually usurped property in the city and who have attacked and menaced local Palestinians backed up by the full might of the Israeli army, which invades Palestinian homes at will.

Ironically, it is not clear that the Israeli authorities will let Tlaib into the West Bank. She practices Boycott, Sanctions and Divestment (BDS) with regard to Israel, and the far right wing Likud government has been attempting to exclude people from entering Israel if they hold that position. Since Israel illegally occupies the West Bank, you can’t visit Palestine without going through Israel and the Israeli authorities. You might say that Netanyahu wouldn’t dare deport a sitting congresswoman. We’ll see.